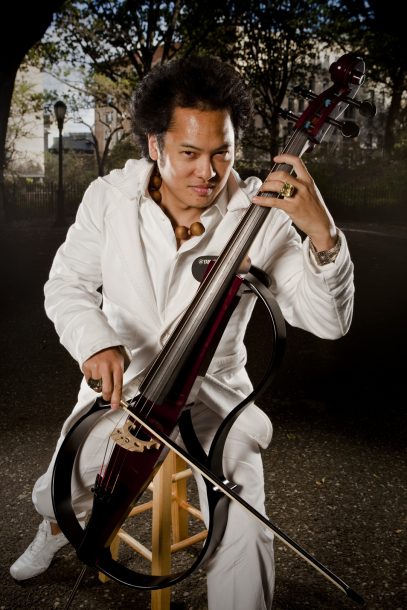 There aren’t many electric cellists in jazz, let alone ones who can draw an audience to the basement of a synagogue on a Thursday night under threat of severe storms and tornadoes. As part of the 2013 DC Jazz Festival, Dana Leong brought his trio (consisting of himself, Lex Sadler on six-string electric bass, and DJ Icewater on turntables) to Washington, D.C.’s Sixth & I Synagogue on June 13, to perform in front of a small but receptive audience.

The trio moved briskly through a 10-song set and two-song encore. Leong is a gifted cellist, capable of both strong arco and quick, precise pizzicato with bluesy inflection. The pizzicato was used to fine effect in the opening tune, the Sam Cooke classic “A Change Is Gonna Come,” and he used the bow to create a haunting tone for “Theme From Life After Dark,” a cut from Leong’s Milk & Jade quartet recording.

Many of the songs performed by Leong were originally recorded with rap vocals, yet the songs did not suffer and many were in fact improved with Leong’s cello taking over melodic duties in the absence of a vocalist. Leong played the melody beautifully on songs such as “One Life” and “Opus One,” and the strong work on turntables laid a solid foundation for Leong to take his playing in unexpected rhythmic directions.

Throughout the set Leong played his cello with abandon, particularly on the more uptempo pieces, seemingly incapable of sitting still for more than a moment as he tossed his body around his instrument to the groove laid down by DJ Icewater. At times his movement affected his intonation, which was slightly off during the faster songs but was flawless during the slower offerings. The intonation issues were minor enough for the most part to be easily overlooked, and Leong’s enthusiasm and energy more than made up for moments of less than flawless pitch.

Leong was in firm lockstep with DJ Icewater, and because the musical product of turntables is more predictable than a traditional instrumentalist, due to the prerecorded music at its core, it was essential that the remaining instrumentalist, bassist Sadler, provide the necessary spontaneity to push Leong. Compared to the creativity and energy of Leong and Icewater, Sadler’s playing was far too cautious as he stuck primarily to root notes and simple basslines. He proved that he had the necessary chops when he loosened up on rockers like Nas’ “If I Ruled the World” and Led Zeppelin’s “Moby Dick,” but the trio would benefit from greater freedom in his playing.

The aforementioned “If I Ruled the World” was the show’s highlight, with the trio feeding off of the crowd’s enthusiasm as Leong riffed aggressively off of Sadler’s enlivened bass playing. The trio culminated the set with the tune “Rain,” which Leong acknowledged was unintentionally all too appropriate considering the weather. The song, one of Leong’s better-known recordings, was short and sweet and a nice coda to the evening.

Leong seems to be on the cusp of breaking out to a wider audience. He has been gaining positive notices and wider audiences over the past couple of years, and the hype around his take on the merging of jazz and hip-hop is starting to grow. While the evening’s forecasted storm never materialized into much more than a drizzle, Leong’s performance was everything that was advertised.

Among the many physical, spiritual, and institutional losses related to the still-ongoing pandemic is that of Los Angeles’ renowned Playboy Jazz Festival (PJF) at the … END_OF_DOCUMENT_TOKEN_TO_BE_REPLACED

It’s difficult to imagine what the stage and the audience would have looked like at Gaillard Center in Charleston, South Carolina, if Rhiannon Giddens’ new … END_OF_DOCUMENT_TOKEN_TO_BE_REPLACED

“It’s time to imagine a place where we can come together,” Danilo Pérez said from the hallowed stage of Washington, D.C.’s historic Sixth & I … END_OF_DOCUMENT_TOKEN_TO_BE_REPLACED

At the Zeiders American Dream Theater in Virginia Beach, Va., between April 8 and 10, the Vocal Jazz Summit convened in person for the first … END_OF_DOCUMENT_TOKEN_TO_BE_REPLACED