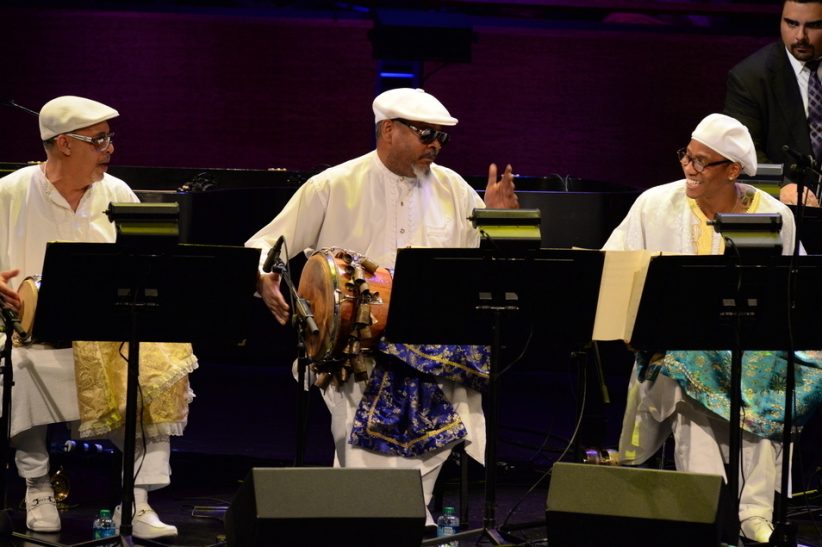 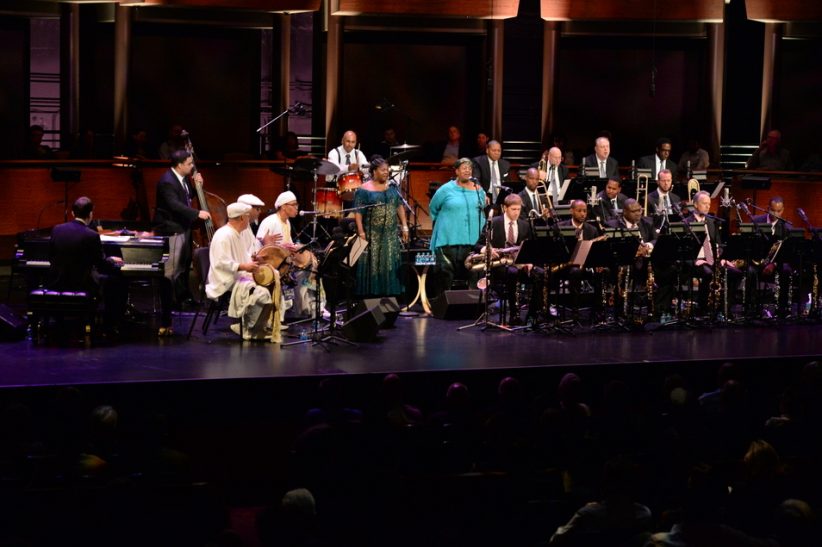 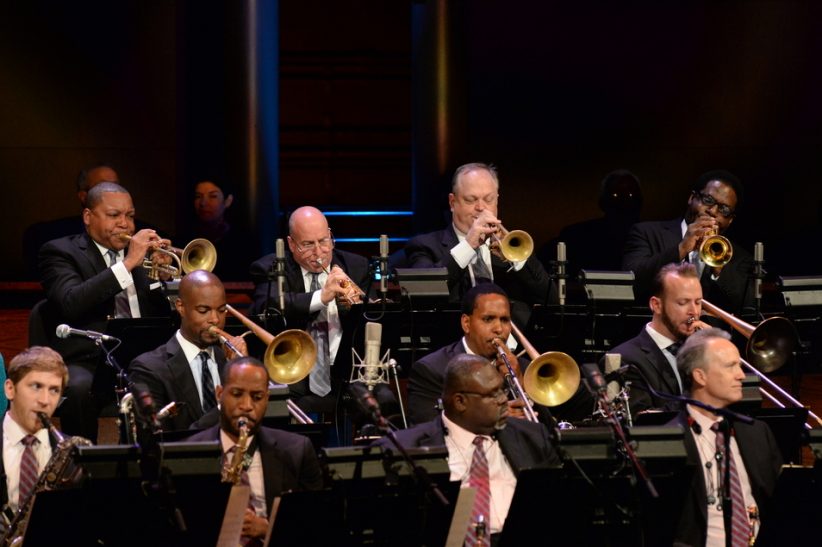 Members of the Jazz at Lincoln Center Orchestra with Wynton Marsalis, JALC, NYC, 9-14

Everybody’s always concerned with the whole. The big picture. The end result. But sometimes it’s the parts that are the most interesting, and such was the case at Jazz at Lincoln Center on September 19, when the New York institution premiered a coming together of pianist Chucho Valdés, vocalist-percussionist Pedrito Martinez and trumpeter Wynton Marsalis. (The evening was the middle night of a three-night run for the piece.) This is not to downplay what happened in general; just about all of the music worked, and one left the performance having taken in something special and entertaining. But it was the puzzle pieces, not the puzzle, that left the deepest impression.

But first a bit about the game. The concert-length piece, “Ochas,” combines jazz and Cuban music-both Valdés, 72, and Martinez, 41, are Cuban-and the sounds were presented in two parts. The 15-piece Jazz at Lincoln Center Orchestra-piano, bass, drums, five saxophones, three trombones and four trumpets including Marsalis-was augmented throughout by three batá drummers (including Martinez). Visually, the percussionists added a dose of looseness: The orchestra members wore gray suits and the trio wore matching white golf caps. The second set brought out additional tricks: Two female vocalists and two dancers, one male and one female. The vocalists wore white dresses; the female dancer wore blue and the male dancer wore red. Near the end of the first set and a couple of times in the second, Valdés emerged to replace the orchestra’s pianist. When Valdés would take over, the concert became an event. Things were special now.

On to the parts. Over the course of the night, the music was big but controlled, with short solos and plenty of grooves. There were moments when the percussionists did not play, and times when they played alone. There was a salsa segment and another section that could have been pulled from a blaxploitation film. There was hard bop and a portion that recalled Charles Mingus’ The Black Saint and the Sinner Lady. There was bowed bass, anthemic piano, 6/8 time and sad trombones; there was drama and sex and hope and the blues. A good deal happened; short on ideas the evening was not. But one never felt overwhelmed by what was occurring, perhaps because all of the elements were connected in some way. The music never reached for something it shouldn’t have. It never included anything just because.

Martinez’s voice is a glorious instrument. It’s soothing and soulful and you never have to strain to hear it; it’s always out front and on top. One special moment found Martinez singing over the female vocalists’ backgrounds. And Valdés has a unique voice on piano. His playing is warm and fluid but with more than a hint of the avant-garde thrown in; the dissonance between those feels felt unforced and exciting. What’s more, he makes it all look so easy; one gets the sense that he could do anything at the keyboard. At one point during the show, it was time for Valdés to rejoin the ensemble. When the pianist did not immediately return to the stage, Marsalis assured the audience, “He’ll be here.” There was no doubt that he would be present.

The Jazz at Lincoln Center Orchestra is also something to marvel at. Elegant, capable and serious, the band makes music that is thick but airy; there is space in the sound, and nothing feels cluttered. And, truly, it’s just impressive to watch 15 people play together without any mess. The music is tight, and it’s a treat to watch players of that caliber work with outside musicians on the same level.

The 2022 Newport Jazz Festival’s three days of sunshine were bracketed, more or less, by a pair of all-star ensemble jams that included Christian McBride. … END_OF_DOCUMENT_TOKEN_TO_BE_REPLACED

In its first full edition since the onset of the pandemic, and with a new director of programming, the Festival International de Jazz de Montréal … END_OF_DOCUMENT_TOKEN_TO_BE_REPLACED

Among the many physical, spiritual, and institutional losses related to the still-ongoing pandemic is that of Los Angeles’ renowned Playboy Jazz Festival (PJF) at the … END_OF_DOCUMENT_TOKEN_TO_BE_REPLACED

It’s difficult to imagine what the stage and the audience would have looked like at Gaillard Center in Charleston, South Carolina, if Rhiannon Giddens’ new … END_OF_DOCUMENT_TOKEN_TO_BE_REPLACED