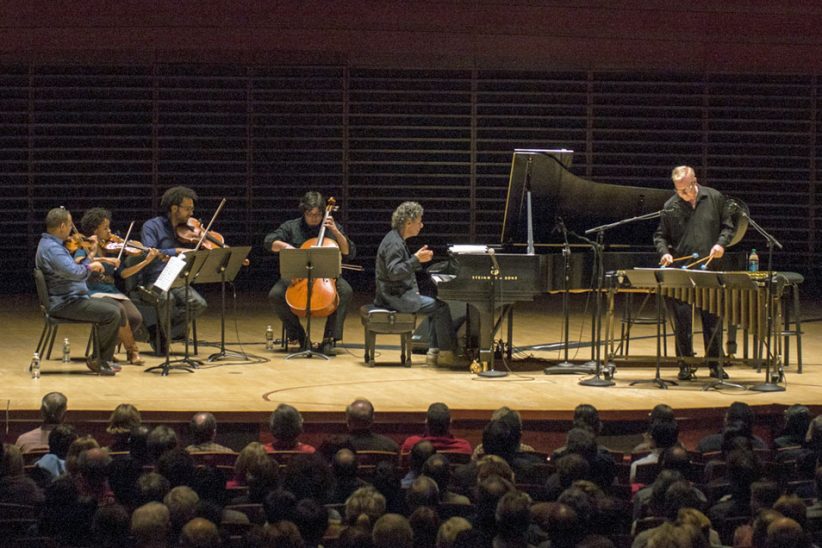 The partnership between pianist Chick Corea and vibraphonist Gary Burton has flourished for decades, producing three Grammy-winning albums since their landmark Crystal Silence in 1972. Their newest, Hot House, is their seventh collaborative recording. It features interpretations of music by Kurt Weill, Thelonious Monk, Dave Brubeck, Antonio Carlos Jobim, John Lennon and Paul McCartney, among others. At Philadelphia’s Kimmel Thaeater the duo performed music from their latest collaborative effort, featuring the Harlem String Quartet.

Corea began the show by reminiscing about the many times he played in Philly, where he first met Return to Forever bassist Stanley Clarke. Corea also acknowledged the students from Philadelphia’s University of the Arts.

The first set opened with Corea’s “Love Castle,” originally recorded on his My Spanish Heart album (1976), then re-recorded by the duo on their Grammy-winning album Native Sense (1997). “Love Castle” is a multi-part composition in which Corea shares a brief piano introduction leading into Burton’s fabulous vibraphone playing. Burton shared that the next tune, “Allegria,” is based on Spanish flamenco guitar and dancers, using a 12-beat pattern. Corea’s clapping and piano chords portray the dance, while Burton’s thumbing on the side of the piano, then on vibes, portrays the guitar. This tune was written while rehearsing other tunes. Burton joked that it’s typical when rehearsing with Corea that they compose a new tune.

Corea and Burton gave the audience a little history about the title track “Hot House,” a Tadd Dameron tune popularized by Charlie Parker and Dizzy Gillespie. “This was the popular jam session favorite back in the ’50s and ’60s,” Corea recalled. For the next tune, Corea jokingly unfurled a long piece of sheet music and the duo performed a beautifully arranged version of the Beatles’ iconic “Eleanor Rigby.”

The first set closed with Corea and Burton sharing their admiration for Stan Getz and a “tribute to our boss” by playing a piece that they both learned in Getz’s band, “Chega de Saudade,” a composition by Brazilian performer-composer Antonio Carlos Jobim.

For the second half, the Harlem String Quartet, who appear on Hot House, shared the stage with Corea and Burton. The quartet is composed of first-place laureates of the Sphinx Competition for Black and Latino string players. The members are first violinist Ilmar Gavilan, second violinist Melissa White, violist Juan-Miguel Hernandez and cellist Paul Wiancko.

The band opened with two pieces from Lyric Suite for Sextet, recorded by Corea and Burton in1982. The first piece “Overture,” which flowed into “Waltz,” detailed and intricate arrangements that created interplay between the strings, piano and vibraphone. “The Adventures of Hypocrites: Movement V” was the following piece. This work featured the string quartet without piano or vibes. As they performed, Corea stood by his piano, looking on proudly. This was a wonderful opportunity for the audience to hear some of Corea’s more adventurous compositions with classical influences.

For their final selections, Corea and Burton performed Thelonious Monk’s “‘Round Midnight” with the strings weaving in and out the melody. Last was a new Corea original composition entitled “Mozart Goes Dancing,” which Burton playfully renamed as “Moza-rea.”

More images from the Chick Corea and Gary Burton’s Hot House Tour performance can be found in Ben Johnson’s photo gallery, “The Art of Live Jazz,” by clicking here.

Among the many physical, spiritual, and institutional losses related to the still-ongoing pandemic is that of Los Angeles’ renowned Playboy Jazz Festival (PJF) at the … END_OF_DOCUMENT_TOKEN_TO_BE_REPLACED

It’s difficult to imagine what the stage and the audience would have looked like at Gaillard Center in Charleston, South Carolina, if Rhiannon Giddens’ new … END_OF_DOCUMENT_TOKEN_TO_BE_REPLACED

“It’s time to imagine a place where we can come together,” Danilo Pérez said from the hallowed stage of Washington, D.C.’s historic Sixth & I … END_OF_DOCUMENT_TOKEN_TO_BE_REPLACED

At the Zeiders American Dream Theater in Virginia Beach, Va., between April 8 and 10, the Vocal Jazz Summit convened in person for the first … END_OF_DOCUMENT_TOKEN_TO_BE_REPLACED