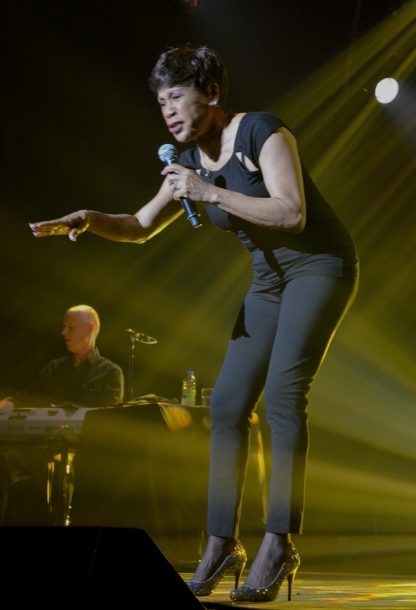 Bettye LaVette has attitude to spare. That much is abundantly clear from reading the slogan printed on the back of the t-shirts sold at her concerts. It reads, “Bettye LaVette: She Will F*ck You Up.”

And that’s probably a threat you don’t want to put to a test. The 67-year-old soul/R&B singer is as tough as nails, a true survivor who had to endure decades of indifference from the public before finally having her talents recognized and appreciated with 2005’s I’ve Got My Own Hell to Raise.

No wonder her concert on Thursday (July 4) at the Montreal International Jazz Festival came across as a victory lap. She’s earned the right to bask in her relatively newfound glory, having toiled since the early 1960s in order to achieve it.

These are, without a doubt, better days for the Michigan native. She’s celebrating 50 years in the business on this tour, as well as the release of the new album, Thankful N’ Thoughtful, and the autobiography A Woman Like Me, both of which came out in 2012. Most significantly, people are now listening to what she has to say-and she certainly wasn’t shy about talking about her trials, tribulations and eventual triumph in Montreal. Fans listened intently to her every word. “If you are making up for 40 years of lost time,” LaVette joked, “they let you say a lot of stuff.”

Fortunately, the music was every bit as captivating as the dialogue. Backed by a versatile four-piece band, LaVette saluted Canada by covering a pair of tunes by one of its favorite native sons, Neil Young. She delivered a shimmering pop version of his “Everybody Knows This Is Nowhere,” which she recorded on Thankful N’ Thoughtful, then a slow, emotional reading of Heart of Gold. She recorded the latter decades ago, although it-like most everything else she released prior to 2005-was ignored. “Most of you have never heard my version,” LaVette said to the crowd. “Because, girlfriend, it didn’t sell a copy.”

Her set list was filled with unexpected treats, such as a sassy cover of Lucinda Williams’ “Joy.” Yet, the offering that drew the strongest reaction from fans was a high-flying rendition of the Gnarls Barkley smash “Crazy,” which ended up being a perfect fit for her soulful voice. She recorded that song for Thankful N’ Thoughtful, she explained, simply because she figured it might make her grandkids think she was “cool.” LaVette never told us whether the song did the trick, but it certainly worked on this crowd.

She brought the show to a close in triumphant fashion with such mighty covers as the Who’s “Love, Reign O’er Me” and Fiona Apple’s “Sleep to Dream.” She then basked in the applause and adulation from fans, thanking them for helping to make this “sudden overnight success that only took 50 years.”

Among the many physical, spiritual, and institutional losses related to the still-ongoing pandemic is that of Los Angeles’ renowned Playboy Jazz Festival (PJF) at the … END_OF_DOCUMENT_TOKEN_TO_BE_REPLACED

It’s difficult to imagine what the stage and the audience would have looked like at Gaillard Center in Charleston, South Carolina, if Rhiannon Giddens’ new … END_OF_DOCUMENT_TOKEN_TO_BE_REPLACED

“It’s time to imagine a place where we can come together,” Danilo Pérez said from the hallowed stage of Washington, D.C.’s historic Sixth & I … END_OF_DOCUMENT_TOKEN_TO_BE_REPLACED

At the Zeiders American Dream Theater in Virginia Beach, Va., between April 8 and 10, the Vocal Jazz Summit convened in person for the first … END_OF_DOCUMENT_TOKEN_TO_BE_REPLACED