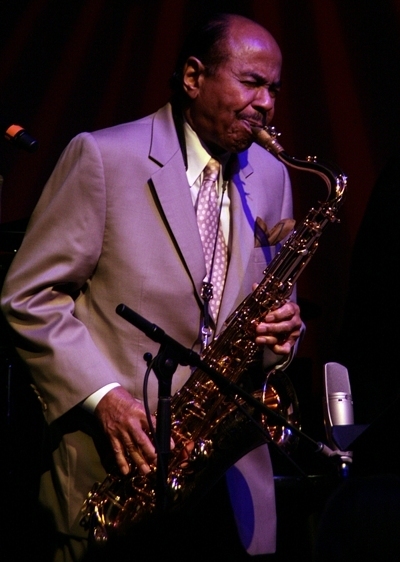 The Naples Philharmonic Jazz Orchestra brought Benny Golson to town on Wednesday, December 11 for a concert that gave spirited and loving extended treatments to the tenor saxophonist’s best-known compositions.

Golson, who will turn 85 on January 25, put each composition into context with witty and vivid storytelling. That “jazz insider’s” approach gave the audience something that is rare in a concert setting by a musician. The audience at Artis Naples’ Daniels Pavilion in Naples, Fla., was treated to great music-and an appreciation of the time and settings in which he matured as an artist.

Together with Golson they explored seven tunes over 90 minutes, with a lot of time out for those monologues. The format underscored Golson’s stature for having penned some of the finest instrumental jazz standards.

The set included “Killer Joe,” “Whisper Not,” “Along Came Betty,” “Stablemates,” “I Remember Clifford” and “Blues March.” Golson also shared a tender take on one non-original, the ballad “These Foolish Things (Remind Me of You),” after reminiscing about jam sessions in his native Philadelphia. He joked that it was the only ballad the jammers knew. “A ballad? We were all ready to play at the speed of light,” he said. “And if a young guy didn’t know a tune, he’d keep his horn pressed to his lips just to fool the audience.”

“Stablemates” was first recorded by Miles Davis in 1955 on Prestige, a factor that Golson credited as getting him started as a jazz composer. The band roared through the tune, which featured a superb violin solo by Basham.

“I wasn’t always a saxophonist,” Golson told the crowd. “I started out as a truck driver, and hated every minute of it.” Things changed when he went on the road with a rhythm and blues band led by Bull Moose Jackson. Golson figured out he could make a living playing music and found ample time to write.

The most intriguing segment was Golson’s 13-minute monologue on the genesis of “I Remember Clifford,” starting with the night he learned that Brown had died in a car crash on the Pennsylvania Turnpike in June 1956. The news came when Golson was on a Dizzy Gillespie gig at the Apollo Theater in Harlem.

“We loved Brownie. It was heartbreaking,” Golson said. “This man had his career snuffed out at 25 years of age.” Brown’s 1955 two-toned green Buick had crashed in a rainstorm. Brown and pianist Richie Powell had been asleep, and Powell’s wife was driving as they headed to Chicago. All three were killed. Golson said he wrote the tune during his next extended engagement with Gillespie in Los Angeles. “It took almost two weeks,” he said. “I wanted every note to be reminiscent of Clifford.”

He said he tried out the tune on Gillespie, who immediately asked to record it. But Golson said trumpeter Lee Morgan beat Dizzy to it, though Gillespie, Donald Byrd and Sonny Rollins soon followed. He said Dizzy’s request really got to him. “My high school hero came down off the wall and asked if he could record my song. Nobody knew who Benny Golson was,” he said. Golson said there are now more than 500 different recordings of it.

Dan Miller took the lead solos, one open, one muted, with Golson answering each solo on his tenor in the band’s performance of what remains one of the most poignant ballads in jazz. Miller captured the playing spirit of Clifford Brown, adding his own soulful embellishments, as Golson smiled.

The band wrapped up the evening with a romp through “Blues March,” which was on drummer Art Blakey’s Jazz Messengers 1958 recording Moanin’ during Golson’s brief but impactful membership in the unit.

Miller said the Naples performance with Golson was beyond exciting. “I’ve been playing his music for 20 years. To play it with him was something else. It’s an honor,” he said. “It’s spiritual-to get inside his phrasing.”

The band’s next appearance on January 8 will feature trumpeter Tom Harrell as special guest.

“It’s time to imagine a place where we can come together,” Danilo Pérez said from the hallowed stage of Washington, D.C.’s historic Sixth & I … END_OF_DOCUMENT_TOKEN_TO_BE_REPLACED

At the Zeiders American Dream Theater in Virginia Beach, Va., between April 8 and 10, the Vocal Jazz Summit convened in person for the first … END_OF_DOCUMENT_TOKEN_TO_BE_REPLACED

The Big Ears Festival returned to Knoxville in a big way in late March, drawing an estimated 30,000 music enthusiasts from across the U.S. and … END_OF_DOCUMENT_TOKEN_TO_BE_REPLACED

Let’s get this out of the way: The Savannah Music Festival is not a jazz festival. Held over the course of 17 days in late … END_OF_DOCUMENT_TOKEN_TO_BE_REPLACED