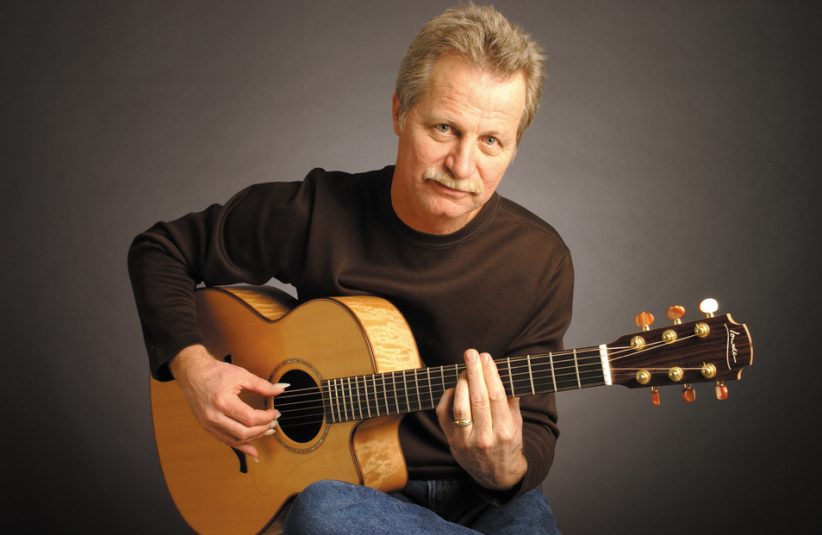 Two hands, two guitars and a seemingly infinite number of ideas. This is how Alex de Grassi held an audience rapt for 90 minutes Sept. 27 on the campus of the University of Wisconsin in Milwaukee, where he was participating in the school’s excellent Guitar Studies program, headed by John Stropes. Each selection was a springboard for the guitarist’s innovative explorations. Placing his own mark on such diverse pieces as the Carter Family’s “Single Girl” and Jimi Hendrix’s “Angel,” de Grassi traversed a remarkably wide musical map with accessible flair and imagination.

When a recital opens with a number about a cat called “Blue Trout,” one is wise to suppress further expectations. This was exemplified by the following selection, an original about James Brown taking a walk in the rain. The title piece from de Grassi’s Water Garden work came next, which melded into the Beatles’ “You Never Give Me Your Money.” Later in the program, de Grassi played another from Water Garden called “Cumulus Rising,” which he dedicated to his deceased friend and fellow acoustic guitarist Michael Hedges. Both were among the first artists signed by Windham Hill, a record label that still holds an unusually strong bond with its early audience.

A spiritual side was shown with “Lay This Body Down” and “Swing Low Sweet Chariot,” and a nod was given to de Grassi’s interest in country music with “Bury Me Not on the Lone Prairie,” which somehow ended up on a Jamaican landscape. A few standards were revisited, including “St. James Infirmary,” and “It Ain’t Necessarily So.”

Part of what was so refreshing about this solo performance was de Grassi’s keen awareness of his audience. Although often playing complex figures, he was never self-indulgent in the length of his selections. He was gracious and funny throughout the evening as he offered useful information about each piece. His sense of humor extended to his repertoire, which included an unexpected version of “Shortnin’ Bread” in a section of the concert he dedicated to “death and food.”

Alex de Grassi’s guitars were, not surprisingly, custom jobs. For most of the evening he played a prototype of the Lowden Guitar Company’s forthcoming de Grassi signature model. The other instrument came from California guitar maker Jeff Traugott. For the first four selections the guitarist played in standard tuning. After this, alternate tunings were frequent. He also took full advantage of other aspects of his two instruments, often adding percussion by striking the body for rhythm, and occasionally even strumming the short strings by the tuning pegs for some lovely auto harp effects.

No amps, no picks-just those guitars and his two hands. Hands that were surely busy, for in the palm of one of them he also held an audience spellbound.

The 2022 Newport Jazz Festival’s three days of sunshine were bracketed, more or less, by a pair of all-star ensemble jams that included Christian McBride. … END_OF_DOCUMENT_TOKEN_TO_BE_REPLACED

In its first full edition since the onset of the pandemic, and with a new director of programming, the Festival International de Jazz de Montréal … END_OF_DOCUMENT_TOKEN_TO_BE_REPLACED

Among the many physical, spiritual, and institutional losses related to the still-ongoing pandemic is that of Los Angeles’ renowned Playboy Jazz Festival (PJF) at the … END_OF_DOCUMENT_TOKEN_TO_BE_REPLACED

It’s difficult to imagine what the stage and the audience would have looked like at Gaillard Center in Charleston, South Carolina, if Rhiannon Giddens’ new … END_OF_DOCUMENT_TOKEN_TO_BE_REPLACED