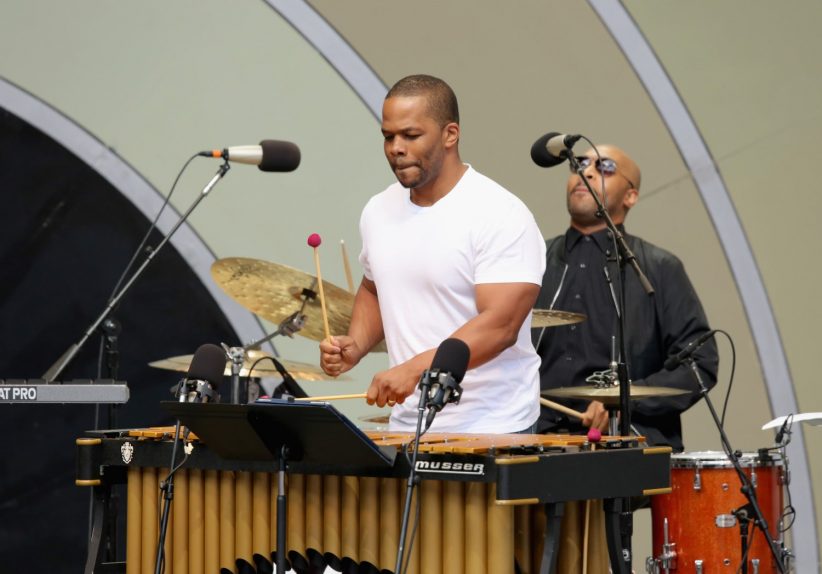 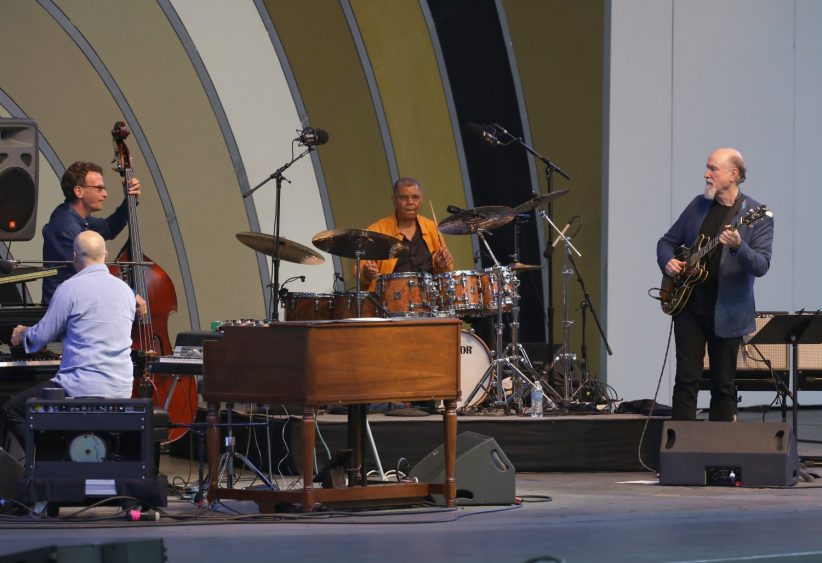 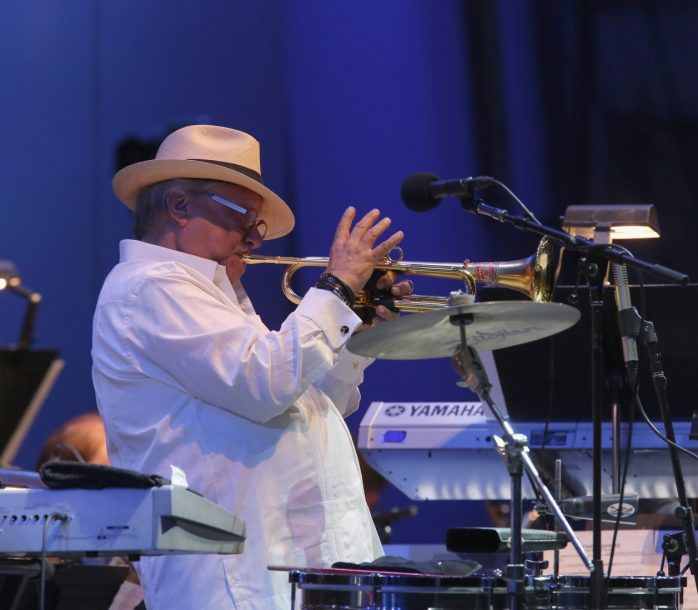 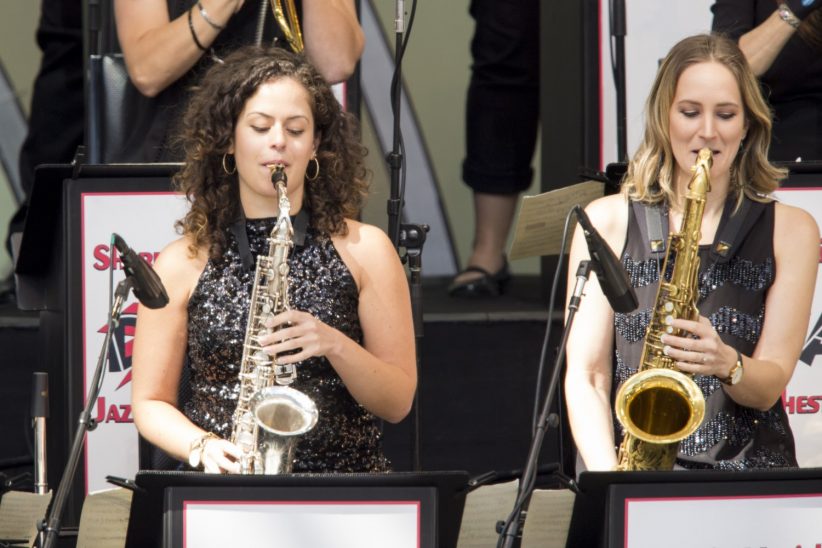 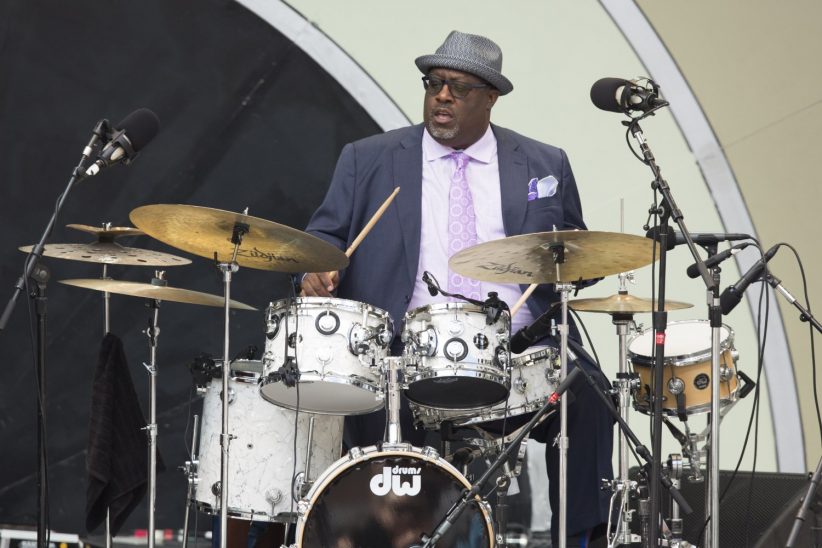 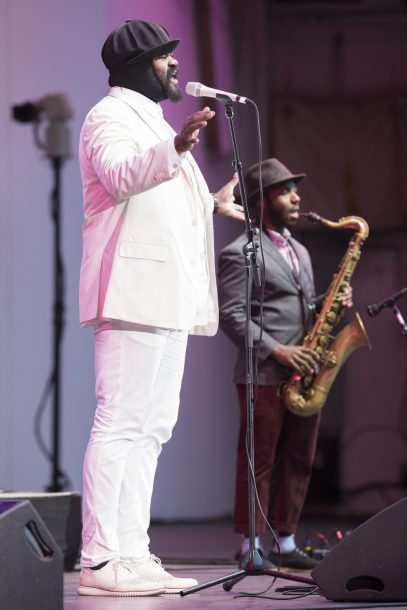 Los Angeles’ Playboy Jazz Festival is often a mélange of R&B, pop, funk and smooth jazz, which leaves mainstream jazz and blues marginalized. However, for the event’s 39th edition there was a noticeable shift, resulting in one of the strongest lineups in recent years, with strong crowd reactions affirming the fest’s choices.

“Celebrating Bobby Hutcherson” was coordinated by vibraphonist and festival music director Stefon Harris, a protégé of the vibraphone and marimba icon who passed away in 2016. Teaming with Harris in the program were three other vibes players—still-in-college Joel Ross, powerhouse Warren Wolf and legend Roy Ayers, all superbly supported by pianist Patrice Rushen, bassist Joshua Crumbly and drummer Eric Harland. Harris, Wolf and Ayers, whom Harris dubbed “The Godfather of Neo Soul,” aligned for a spirited rendering of “Highway One” that even had emcee George Lopez howling in approval. Harris briefly stepped away as Ross joined the other vibraphonists for “Little B’s Poem” and then returned for the finale, “Roses Poses,” with everyone, accompaniment included, all soloing profoundly.

TajMo: The Taj Mahal and Keb Mo’ Band firmly established that the blues is very much alive and well, and might even steal your spouse. Fueled by horns, backup singers and a ripping rhythm section, the rascally duo led off with Mahal’s cover of Horace Silver’s “Señor Blues.” They ventured into hard-driving contemporary blues with their original “Don’t Leave Me Here,” followed by an acoustic treatment of Sleepy John Estes’ classic “Diving Duck Blues” and “Soul,” a world-music-oriented original. Not to be forgotten and much to the audience’s delight were Mahal’s signature blues numbers “Leaving Trunk” and “She Caught the Katy,” along with Mo’s funky “Government Cheese.”

Hudson, a jazz supergroup composed of drummer Jack DeJohnette, bassist Larry Grenadier, keyboardist John Medeski and guitarist John Scofield, pushed the envelope with an eclectic set of tunes. They began with a wiggy version of Jimi Hendrix’s “Wait Until Tomorrow” featuring Scofield and Medeski psychedelically stretching out, and continued with the Bitches Brew-inspired eponymous title track from their new album. The explosive quartet found balance with accessible and appealing takes on Joni Mitchell’s “Woodstock” and Robbie Robertson’s (The Band) “Up on Cripple Creek.”

In a category all by himself, 22-year-old modern-day one-man-band Jacob Collier rocked the house. He adventurously played keyboards through an MIT-designed harmonizer and employed Take 6-like vocal choruses, utilized samples of himself playing bass, drums and percussion, and included 3-D video-capture loops for his Stevie Wonder and Gershwin covers. To keep himself honest he played only acoustic piano while singing Wonder’s “You and I.”

Trumpeter Arturo Sandoval’s Latin Big Band—with actor Andy Garcia on bongos—was all business, rendering Latin-jazz classics bolstered by the trumpeter’s trademark high-register soaring. A change of pace was provided by “Maynard and Waynard,” a trumpet duet with sideman Wayne Bergeron. During the set Sandoval also presented a mashup of Weather Report’s “Black Market” rhythm with the melody of “Peanut Vendor,” launched into Lou Bega’s “Mambo No .5” and even played piano with the band.

Sherrie Maricle’s all-woman DIVA Jazz Orchestra roared with a set of hard-swinging originals plus renditions of classic compositions including Peggy Lee’s “I Love Being Here With You,” Antonio Carlos Jobim’s “A Felicidade” and the ’30s standard “Pennies From Heaven”—all to showcase various members of the band. Deceased orchestra founder, drummer and former Buddy Rich manager Stanley Kay’s “Did You Do That” spotlighted sax players Roxy Coss and Janelle Reichman, and “Get Me to the Church on Time” was punctuated by leader/drummer Maricle’s explosive solo.

Rekindling the spirit of hard bop was drummer Carl Allen and the Art of Elvin, a tribute to his mentors Elvin Jones and Art Blakey. With Donald Vega on piano, Freddie Hendrix on trumpet, Keith Loftis on reeds and Yasushi Nakamura on bass, the quintet came out of the gate blazing with Wayne Shorter’s “One by One,” composed by Shorter while in Blakey’s Jazz Messengers. Alternately, Allen’s “Jones for Jones,” written the day the legend died, was somber, solo-laden and cool swinging.

For something a little different, saxophonist Kenny Garrett’s quintet combined forces with the nine-member JazzAntiqua Dance Ensemble for a captivating display of movement to a jaunty soul-jazz backdrop. Included was the bandleader chanting and singing “Do Your Dance,” and doing the same for “Happy People.”

Quickly becoming a festival regular, Grammy-winning vocalist Gregory Porter and his backing quartet mixed cuts from Porter’s latest recording, Take Me to the Alley, into a program of well-worn audience favorites including “Musical Genocide,” “On My Way to Harlem” and a soul-rocking cover of the Temptations “Papa Was a Rolling Stone.”

“It’s time to imagine a place where we can come together,” Danilo Pérez said from the hallowed stage of Washington, D.C.’s historic Sixth & I … END_OF_DOCUMENT_TOKEN_TO_BE_REPLACED

At the Zeiders American Dream Theater in Virginia Beach, Va., between April 8 and 10, the Vocal Jazz Summit convened in person for the first … END_OF_DOCUMENT_TOKEN_TO_BE_REPLACED

The Big Ears Festival returned to Knoxville in a big way in late March, drawing an estimated 30,000 music enthusiasts from across the U.S. and … END_OF_DOCUMENT_TOKEN_TO_BE_REPLACED

Let’s get this out of the way: The Savannah Music Festival is not a jazz festival. Held over the course of 17 days in late … END_OF_DOCUMENT_TOKEN_TO_BE_REPLACED