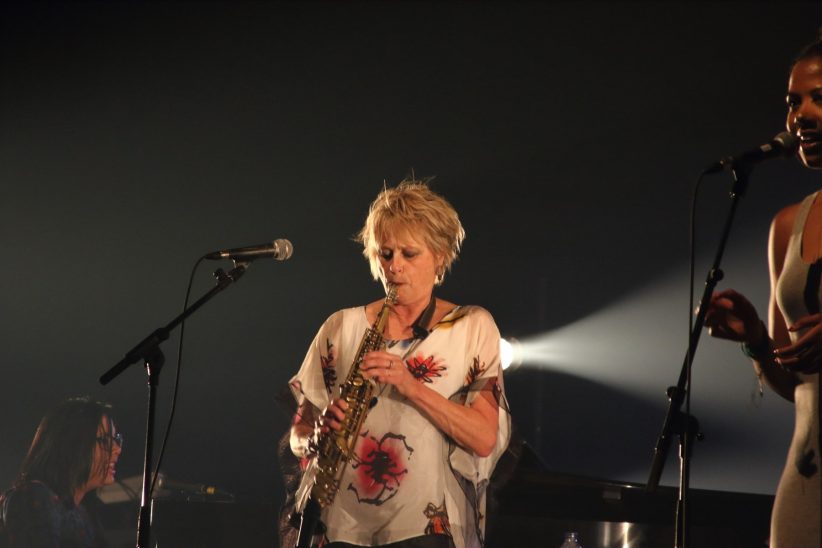 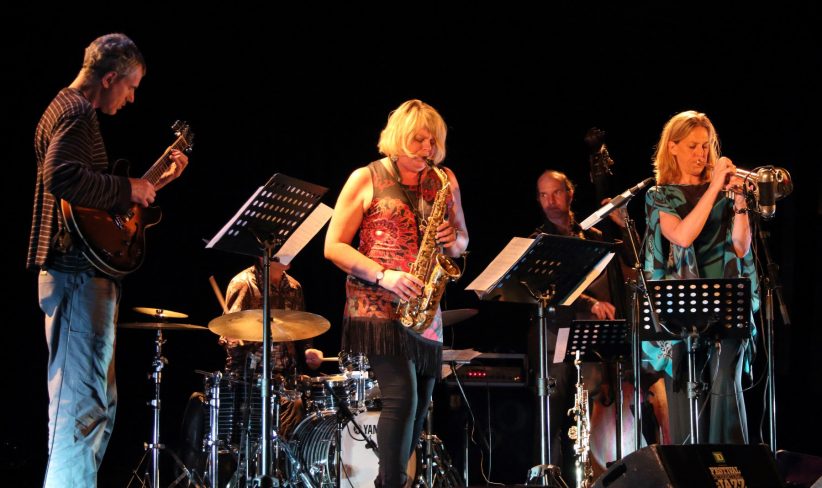 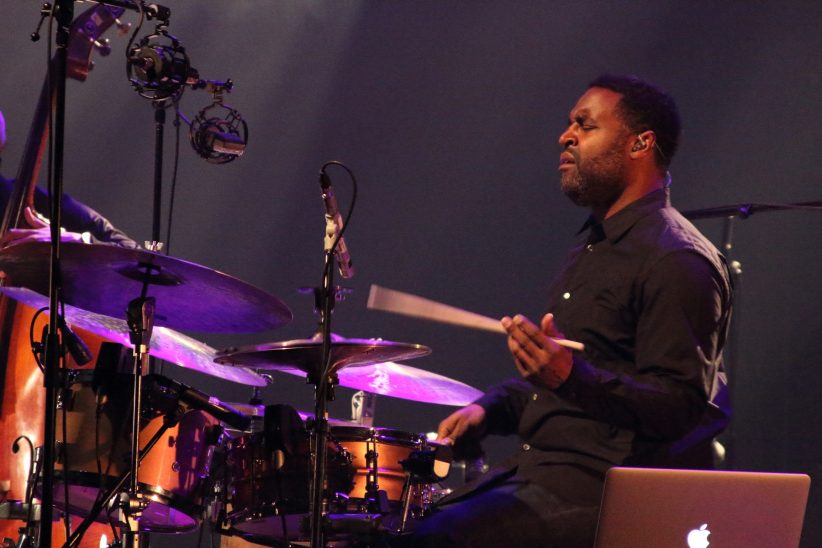 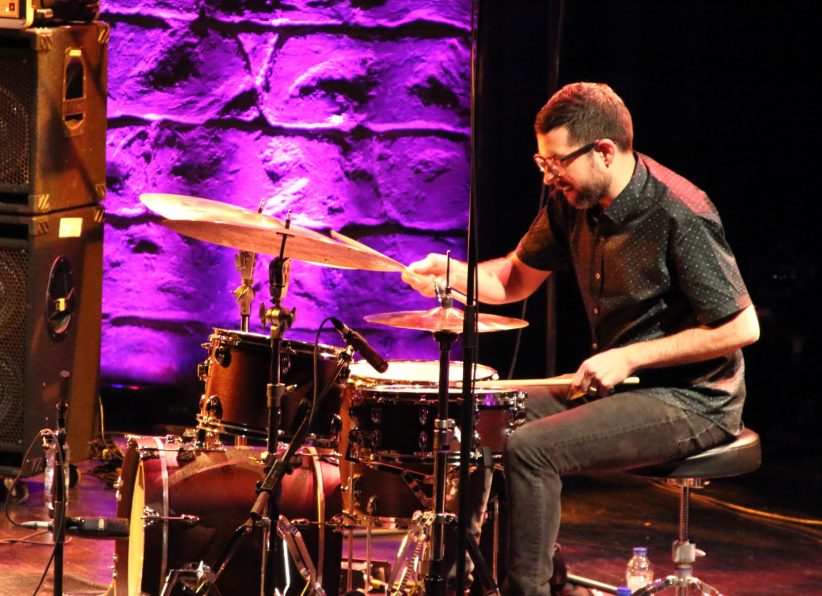 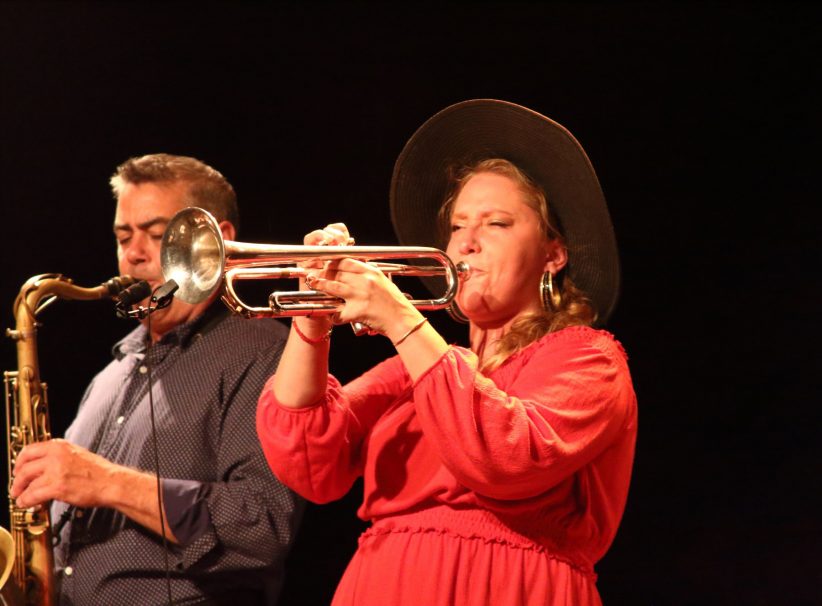 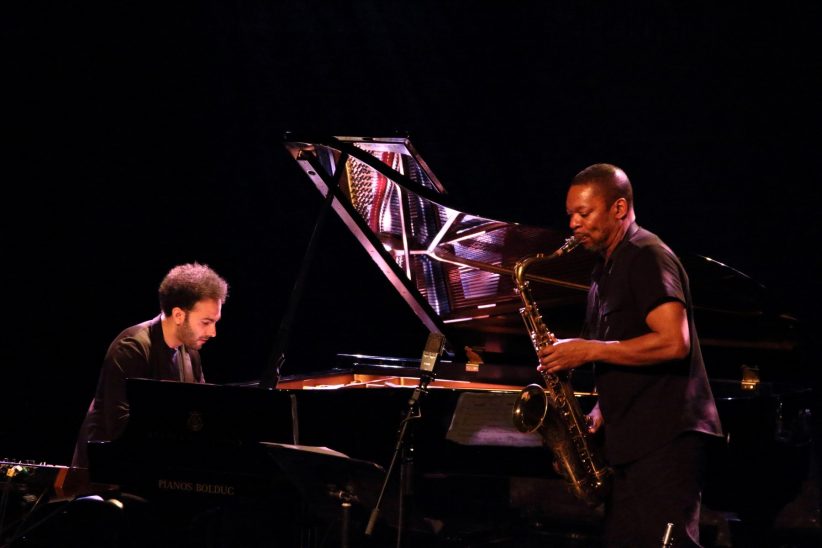 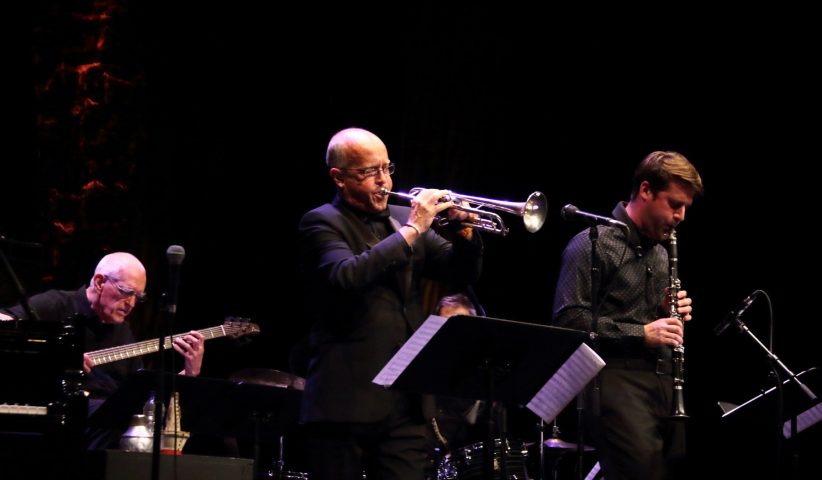 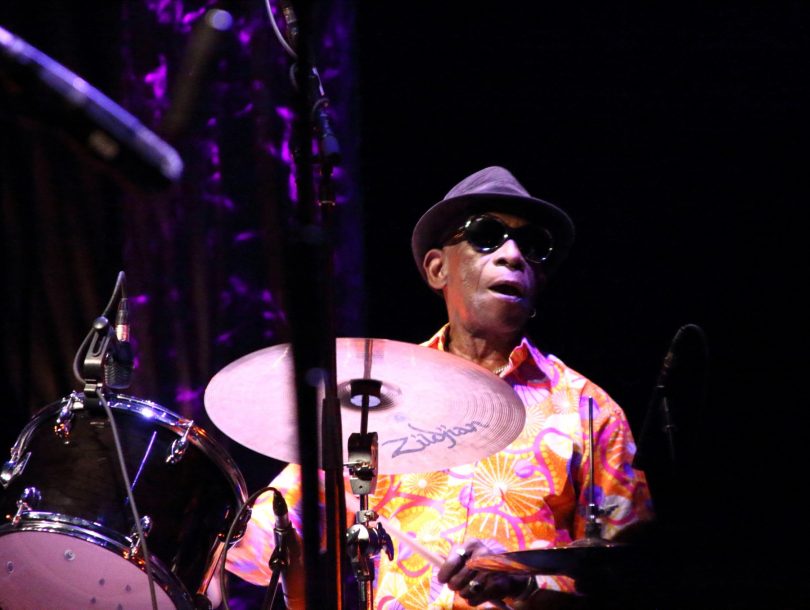 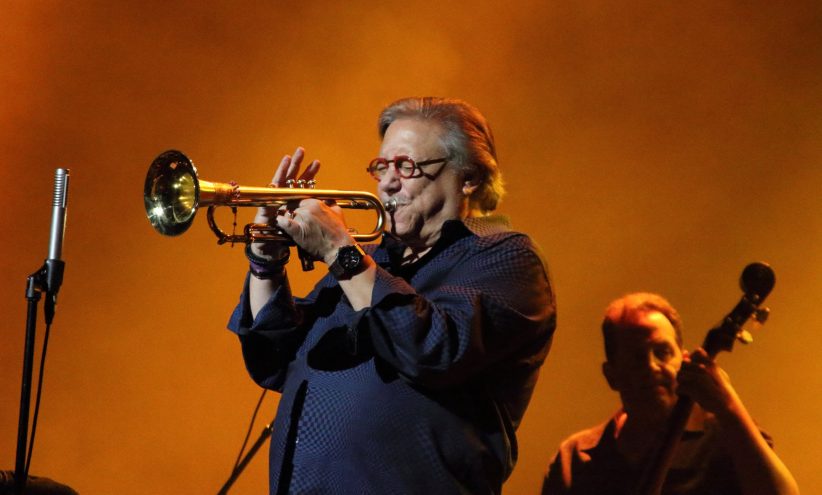 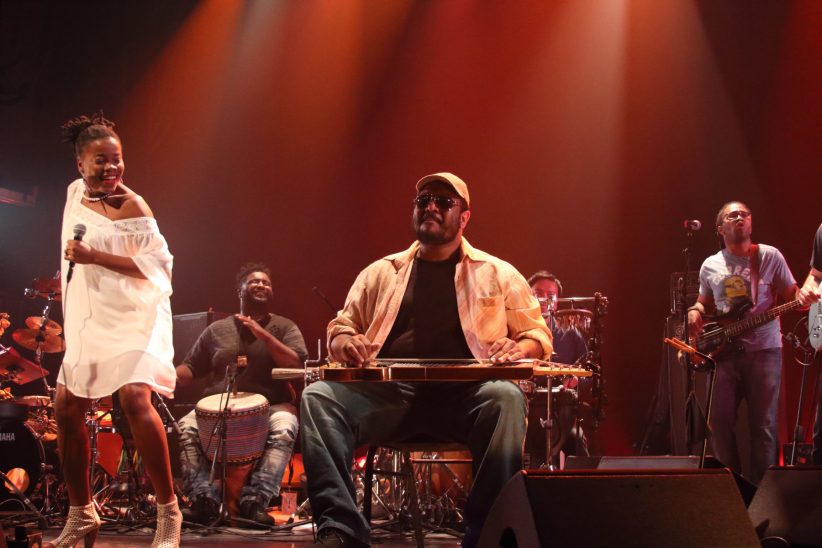 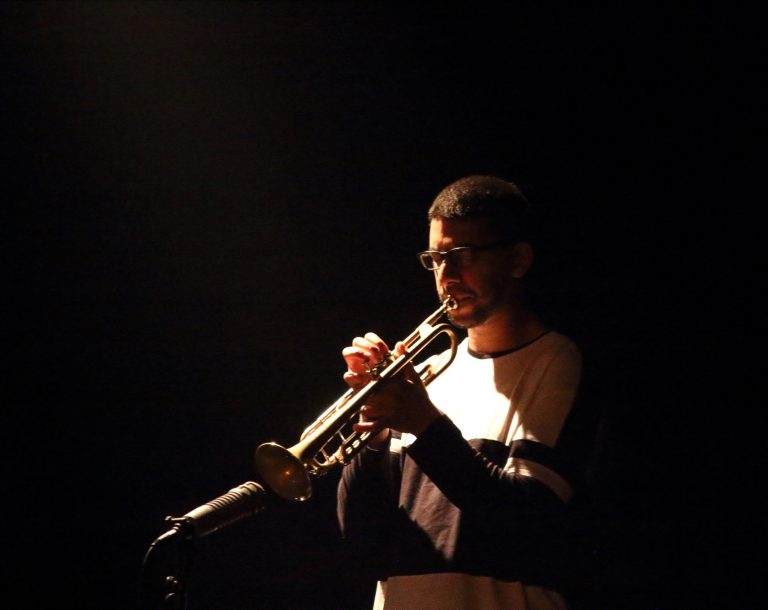 Running from June 28 to July 8, with over two-thirds of its 500-plus concerts taking place on several outdoor stages and free to the public, the 38th edition of Festival International de Jazz de Montréal was loaded with high-voltage star power and creative energy, presenting jazz in all its forms (and everything else from pop to rock, funk, soul, rap, gospel, blues and world music).

The festival’s prestigious and always exciting Invitation Series did not disappoint. Held at Le Centre de créativité du Gesù (a church built in 1865 and converted into a concert hall with superior sound), these unique three-night adventures allow performers to curate their own series of concerts with artists of their choice, creating one-time collaborations you will not experience at any other festival. The Bad Plus played their opening night as a trio, then shared the stage with saxophonist Rudresh Mahanthappa, and finally with guitarist Kurt Rosenwinkel; Ravi Coltrane offered a captivating series with Cuban pianist David Virelles, then with his working quartet, and finally with The Void (featuring Robin Eubanks, Jason Palmer, Glenn Zaleski, Yunior Terry and E.J. Strickland).

Similarly, several artists were unable to avoid commenting on the present state of affairs. Pianist Danilo Perez mentioned “challenging times” and cuts to funding for the arts, and noted that Montréal demonstrates how culture and the arts actually impact and shape society; trumpeter Ambrose Akinmusire, drawing from his new album A Rift in Decorum: Live at the Village Vanguard; drummer Kendrick Scott, whose set included “Philando”; and legendary saxophonist Charles Lloyd, who introduced his new composition, “Defiant,” during a mesmerizing set with his potent New Quartet (pianist Gerald Clayton, bassist Reuben Rogers and drummer Eric Harland) all expressed socio-political commentary.

As befits it, the festival featured jazz from around the world, with a “U.K. Marathon” including Phronesis, the Portico Quartet, pianist Gwilym Simcock and sax-drums duo Binker & Moses; Cuban piano virtuoso Harold López-Nussa; and legendary Nigerian drummer Tony Allen playing material from his new Blue Note recording A Tribute to Art Blakey, and putting an Afrobeat spin on Jazz Messengers classics such “Moanin'” and “A Night in Tunisia.”

One of the best surprises this year was a blistering set by the newly formed international ensemble Bokanté, led by Michael League (Snarky Puppy), with Guadeloupe-born, Montréal-based powerhouse vocalist Malika Tirolien singing in Creole and French. Percussion- and guitar-heavy (including lap and pedal steel), the band’s unusual instrumentation, evocative compositions (check Strange Circles) and searing energy made this one of the festival’s most memorable concerts.

Coinciding with Canada’s 150th and Montréal’s 375th anniversaries, the festival’s programming included a wealth of national and local talent, with an encouragingly large female contingent. Canadian saxophonist and flutist Jane Bunnett presented her all-female, Cuban-inspired ensemble Maqueque in a double bill with trumpeter Arturo Sandoval who, in tribute to Duke Ellington, invited Ellington’s daughter and son onstage for renditions of “Take the A Train” and “Caravan.”

Saxophonist Christine Jensen received the Oscar Peterson award for her work not only as a gifted player, but also as a composer, arranger, bandleader and educator. “She composes dreams by showing students how it’s done,” said trumpeter (and sister) Ingrid Jensen later that evening, when the two shared the L’Astral stage with NYC guitarist Ben Monder and drummer Jon Wikan while performing captivating music from their new album Infinitude, inspired by “the dream state of the Great North.”

Over at the cozy Dièse Onze on St. Denis, the richness and diversity of the Montréal jazz community were on full display. Pianist Marianne Trudel showcased the music of Antonio Carlos Jobim; trumpeter Ron Di Lauro’s sextet offered a Miles Davis tribute; guitarist Carlos Jiménez introduced his new Blue Note Sound Quintet; and saxophonist Al McLean paid homage to his most profound influence, John Coltrane. McLean spoke of Coltrane’s incredibly prolific period during October of 1960, dedicating the night to music composed exclusively during this time. The first set included “Village Blues” and “Summertime,” while the second featured McLean’s lush sound on the classic Coltrane Plays the Blues, presented in its entirety.

Trumpeter Rachel Therrien performed on a number of stages: first as a featured soloist in Beth McKenna’s Jazz Orchestra (which played the leader’s eight-part suite Home: Montréal); later the same night accompanying Cuban pianist Roberto Fonseca and again as a surprise guest during Tony Allen’s Blakey tribute. She presented her fiery new Afro-Colombian project Pensamiento at L’Astral, with a local band that included Colombian marimba player La Wey Segura (one of the 12 Colombian musicians featured on the album, recorded in Bogota), playing original compositions as well as arrangements of “Prende La Vela” and “¿Por qué me pega?.”

Closing night showcased Montréal’s Orchestre national de jazz, conducted by drummer-composer-bandleader John Hollenbeck (now a “proud Montréal resident” and teacher at McGill’s Schulich School of music) with Theo Bleckmann on vocals and effects. The performance was the world premiere of a new composition by Hollenbeck intended to be a “spatial experiment.” During the course of the performance’s 12 sections, which included a piece dedicated to Laurie Frink and ended with an arrangement of Kraftwerk’s classic “Das Model,” Bleckmann and the musicians moved around the stage (and the entire concert hall), chanting gibberish, tapping on instruments, hollering, humming and singing. It was a unique, riveting experience to be in the audience that night—the perfect ending to this extraordinary celebration of music. Originally Published July 12, 2017

Among the many physical, spiritual, and institutional losses related to the still-ongoing pandemic is that of Los Angeles’ renowned Playboy Jazz Festival (PJF) at the … END_OF_DOCUMENT_TOKEN_TO_BE_REPLACED

It’s difficult to imagine what the stage and the audience would have looked like at Gaillard Center in Charleston, South Carolina, if Rhiannon Giddens’ new … END_OF_DOCUMENT_TOKEN_TO_BE_REPLACED

“It’s time to imagine a place where we can come together,” Danilo Pérez said from the hallowed stage of Washington, D.C.’s historic Sixth & I … END_OF_DOCUMENT_TOKEN_TO_BE_REPLACED

At the Zeiders American Dream Theater in Virginia Beach, Va., between April 8 and 10, the Vocal Jazz Summit convened in person for the first … END_OF_DOCUMENT_TOKEN_TO_BE_REPLACED