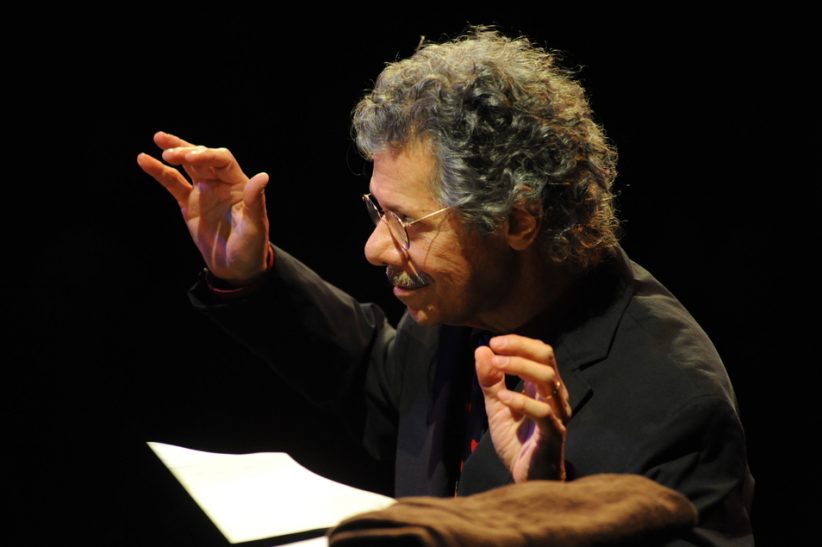 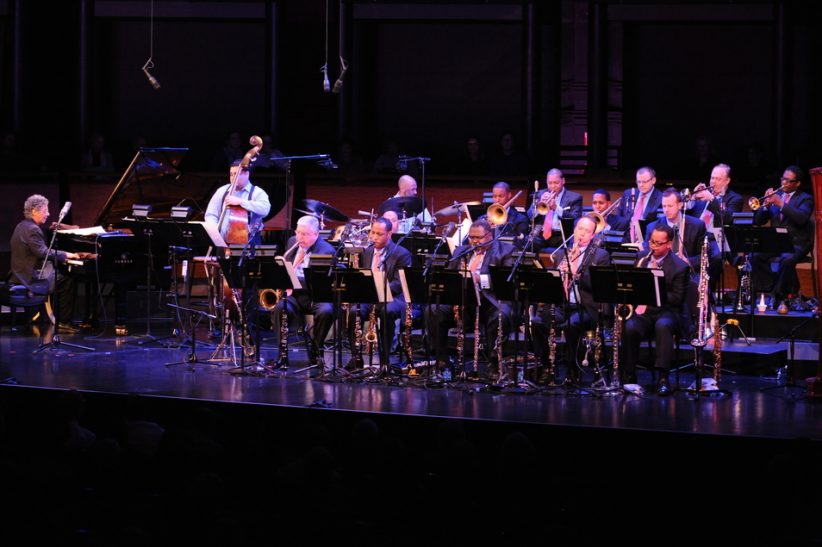 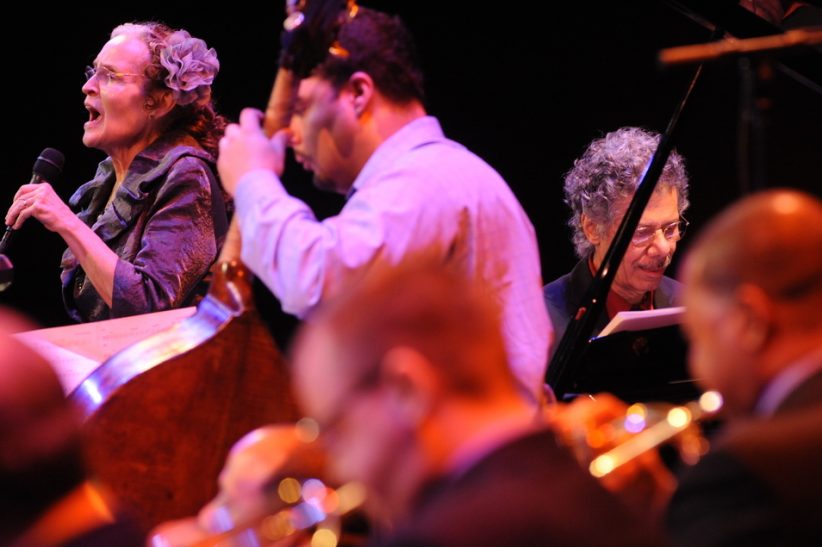 A newly-trimmed Chick Corea (he’s lost 80 pounds) took the stage at spacious Rose Theater spouting praise for his host Wynton Marsalis. “I feel very honored to be in this environment that Wynton and the band create,” he told the Saturday night crowd. “Wynton promotes a space of freedom of expression and that’s what we’re all about.” And the artistic director of the Jazz at Lincoln Center Orchestra (JLCO) was equally effusive. “This week has been fantastic for us,” said Wynton. “It’s been revelatory and inspirational.”

It had been a busy week indeed for the multiple Grammy-winning artist, who turns 70 this year. On Sunday he engaged in some interactive duets in a midtown Manhattan studio with Roy Haynes for the drummer’s next Dreyfus Jazz recording (they played Monk’s “Off Minor” and “Introspection” along with an improv piece). There followed a week of intensive rehearsals with the JLCO, whose members had concocted fresh new arrangements of his classic pieces spanning four decades. Their three-night engagement at the Rose Theater kicked off on Thursday evening. On Friday evening (technically the wee hours of Saturday morning), Corea found himself sharing a piano bench up at Dizzy’s Club Coca-Cola with Marcus Roberts, jamming ’til 2:30 with Wynton, Lew Soloff and others.

By Saturday night, with four sets already under his belt with the 15-piece JLCO, Corea and company were in perfect synch on these ambitious big band arrangements. They opened with drummer Ali Jackson’s 12/8 Afro-Caribbean treatment of “Wigwam,” a piece from 1999’s Change by Corea’s Origin sextet. With trombonist Elliot Mason playing with a wah-wah mute and Marsalis affecting some Bubber Miley styled plunger work on trumpet, they percolated over an infectious son montuno groove. Wynton turned in a stellar solo here and Victor Goines offered a thoughtful, half-time soprano sax solo that gradually built to an ecstatic peak of Liebmanesque intensity as Marsalis shouted enthusiastic encouragement (“You got it, baby!”) from the trumpet section. The piece built to a wild climax with the horns shouting raucously, in the fashion of Ellington’s ‘jungle band,’ while Corea soloed brilliantly over the top.

Alto saxophonist Ted Nash created an impressionistic into to “Tones for Joan’s Bones,” a tune Corea recorded in 1966 in the former Atlantic Studios that used to be located just across the street from the site of Jazz at Lincoln Center. This breezy, buoyantly swinging big band rendering, which sounded like it could’ve been in Stan Kenton’s book, broke down at one point into an interactive trio section with Corea stretching over bassist Carlos Henriquez’s insistent walking pulse and Jackson’s surging momentum on the kit. Trumpeter Kenny Rampton and trombonist Vincent Gardner contributed strong solos on this cleverly reharmonized piece. Nash also wrote a hip arrangement of “Windows,” a lovely 3/4 number originally written by Corea for flutist Hubert Laws’ debut album in 1966. (Chick explained to the crowd that shortly after moving to New York he had briefly attended Juillliard, where he first met Laws). Harpist Riza Printup was featured doubling with flute on the whimsical theme before the full ensemble kicked into some dynamic big band shouts near the end of the piece. Nash also showcased some virtuosic flute work in his extended solo, backed only by the trio of Corea, Jackson and Henriquez.

Set one ended in exhilarating fashion with Henriquez’s arrangement of “Armando’s Rhumba,” a piece dedicated to Corea’s father (a one-time bandleader in his hometown of Chelsea, Massachusetts) and which originally appeared on Chick’s 1976 album, My Spanish Heart. Bassist Henriquez slowed down the piece and put a heavy Afro-Cuban spin on it with an authentic tumbao groove underneath, supported by Bobby Allende’s percolating conga work. Henriquez also turned in an outstanding solo over Corea’s son montuno breakdown mid-piece.

Set two opened with Victor Goines’ big band arrangement of “You’re Everything” (from the classic 1972 Return To Forever album, Light As A Feather) featuring Corea’s wife Gayle Moran on vocals. Her coloratura soprano style, so effective on the Mahavishnu Orchestra’s classically-influenced Apocalypse from 1974, lent a soaring, operatic interpretation to the lyrics originally sung with more clipped phrasing by Brazilian vocalist Flora Purim. Drummer Jackson emulated an entire batacuda samba band with his exhilarating, polyrhythmic whirlwind of a solo near the end of this energized piece. And Marsalis kicked in cuica sounds on his trumpet to add to the samba spirit.

Riza Printup returned for a harp feature on her husband Marcus Printup’s stirring, majestic arrangement of “Crystal Silence,” title track of Corea’s luminous 1972 duet album with vibist Gary Burton. Vincent Gardner’s arrangement of “Matrix” (from 1968’s trio classic Now He Sings, Now He Sobs with Roy Haynes and Miroslav Vitous) opened with a free jazz blowout before falling into some disciplined reharmonization featuring tight Four Brothers styled unisons by the sax section. Corea channeled his inner Bud Powell on the romping trio section, which also included another stellar bass solo from Henriquez. Marsalis prefaced this intricate, pyrotechnic workout by explaining to the audience that Gardner’s arrangements are invariably challenging. This was no exception.

Marsalis played around with the inherent arpeggiation of Corea’s “Children’s Song No. 19” while also turning in his most lyrical solo of the evening. And the concert closed on a rousing note with Sherman Irby’s arrangement of “Straight Up and Down,” a driving, uptempo burner which originally appeared on Tones for Joan’s Bones. Ryan Kisor, the band’s high note trumpet specialist, turned in a bristling solo here, followed by a show-stopping, J.J. Johnson influenced trombone solo by Elliot Mason. This boldly swaggering homage to Manhattan concluded Corea’s first collaboration with the JLCO in Marsalis’ House of Swing in high-flying fashion.

The 2022 Newport Jazz Festival’s three days of sunshine were bracketed, more or less, by a pair of all-star ensemble jams that included Christian McBride. … END_OF_DOCUMENT_TOKEN_TO_BE_REPLACED

In its first full edition since the onset of the pandemic, and with a new director of programming, the Festival International de Jazz de Montréal … END_OF_DOCUMENT_TOKEN_TO_BE_REPLACED

Among the many physical, spiritual, and institutional losses related to the still-ongoing pandemic is that of Los Angeles’ renowned Playboy Jazz Festival (PJF) at the … END_OF_DOCUMENT_TOKEN_TO_BE_REPLACED

It’s difficult to imagine what the stage and the audience would have looked like at Gaillard Center in Charleston, South Carolina, if Rhiannon Giddens’ new … END_OF_DOCUMENT_TOKEN_TO_BE_REPLACED