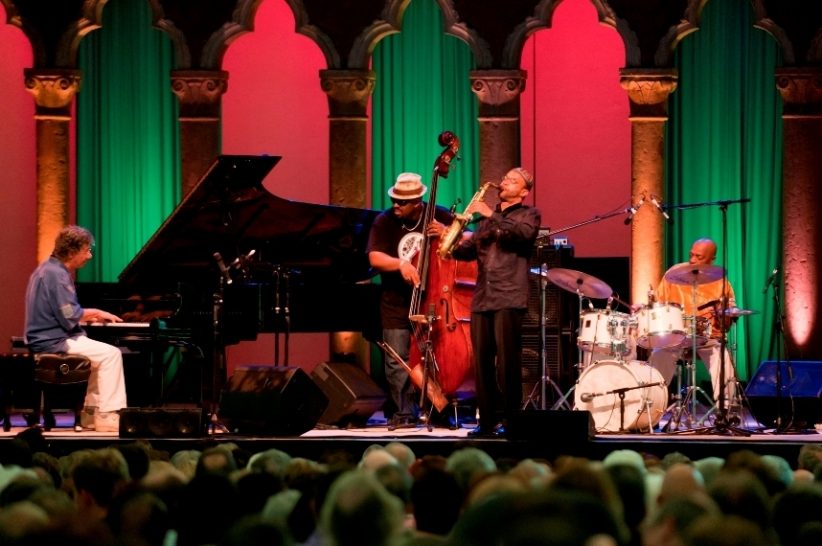 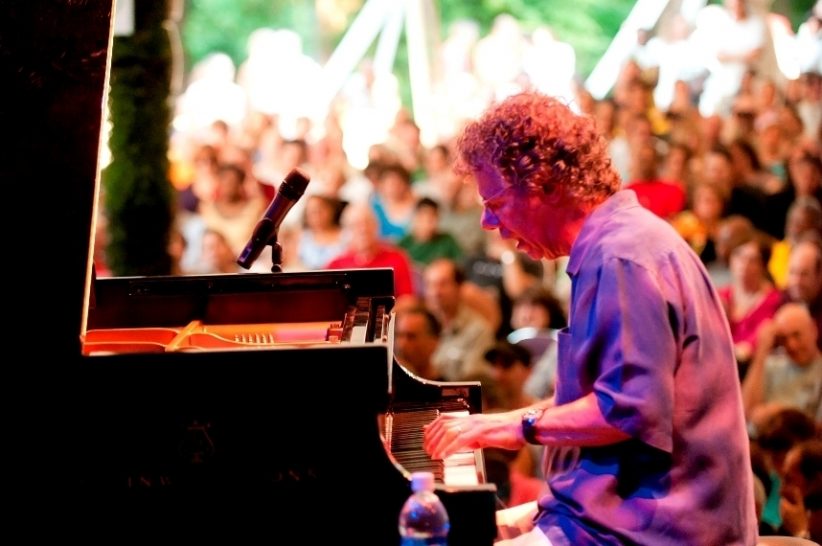 Chick Corea performing with his Freedom Band at Caramoor 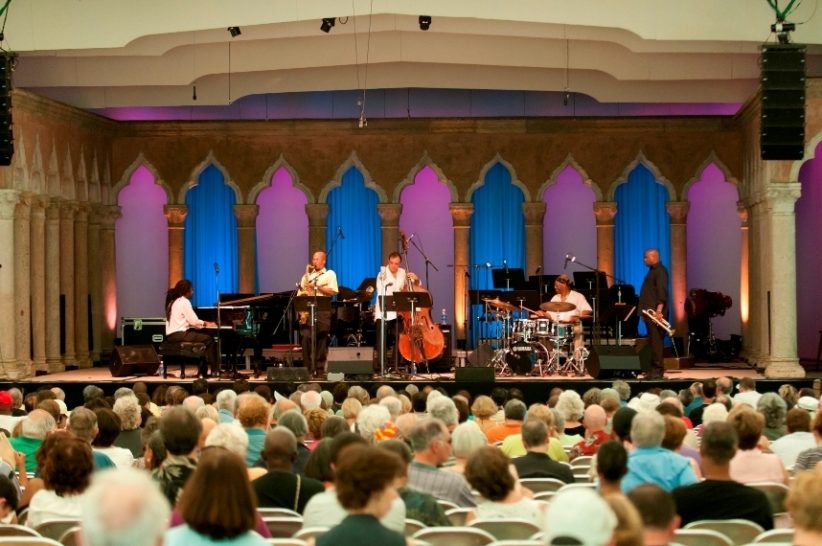 The 90-acre garden estate of Walter and Lucie Rosen in Westchester County is as magical and unlikely a spot for a jazz festival as one could imagine. But for one weekend each summer, this Shangri-La in the woods becomes an oasis for jazz fans from New York City and around the tri-state area. Located just an hour north of the Big Apple, it’s a great escape for city dwellers to experience their midsummer night’s dream.

The final day of this three-day festival featured some globally-influenced jazz by Cuban pianist Elio Villafranca, his countryman Chuchito Valdes fronting a big band and accomplished guitarist-composer and world music enthusiast Brad Shepik with his sparkling quintet. Together, these three bands proffered the idea of jazz as an international language, and the astute audience was down for the ride.

Following an early dinner break, during which picnickers were serenaded by the infectious second line pulse of the Sugartone Brass Band from New Orleans, the headliners of the evening – Chick Corea’s Freedom Band – enthralled the crowd with a masterful exhibition of syncopated group-think, fueled by the indefatigable and irrepressibly swinging octogenarian Roy Haynes.

Shepik kicked off the proceedings in the afternoon, performing his magnificent Human Activity Suite. Each piece in this evocative ten-movement work (documented on Shepik’s recent Songlines release) addresses the effects of climate change on different continents. With trumpeter Ralph Alessi, an impeccable technician and formidable improviser, doubling the guitarist’s brisk, serpentine lines up front on exceptionally intricate pieces like “Blue Marble” (for Africa) and “Lima” (for South America), the loose-tight rhythm tandem of bassist Drew Gress and drummer Tom Rainey provided surging momentum alongside pianist Matt Mitchell on these challenging, odd-metered vehicles. And though Shepik utilizes a myriad stringed instruments on his recording of this work, including the Turkish saz and Bulgarian tambura, he relied strictly on electric guitar for this Caramoor performance, showing remarkable command of his instrument and an impressive warm-toned legato flow on his solos. The quintet swung in a more conventional 4/4 manner on the exhilarating “Carbonic” and closed with a turbulent, M-Base-ish romp, “Blindspot” (for North America), that incorporated dissonance and angularity into the mix and featured some frantic exchanges between Shepik, Alessi and Mitchell that built to an ecstatic peak.

The charismatic Villafranca, sporting a pink shirt and long dreadlocks, traveled easily from Santeria chants and percussive jams to Jazz Messengers-styled hard bop during his set, while also revealing his classical training in the crisp articulation and sterling arpeggios he wove into the fabric of his energized music. Accompanied by an outstanding crew of tenor saxophonist Greg Tardy, trumpeter Terell Stafford, bassist Gregg August and veteran drummer Lewis Nash, the pianist-composer premiered new work along with material from his latest CD, The Source In Between. And while their chemistry was apparent from the outset, the crowd seemed dumbfounded when Villafranca announced, “This is my first time playing with these guys.” Saxophonist Tardy shone brightly on the darkly evocative “Nothing to Lose” while Stafford’s aggressive attack ignited the hard-charging, clave-fueled cooker “The Source In Between,” which was full of bristling unison lines between tenor and trumpet on the frontline. A bold improvisor, Stafford elicited a burst of applause when he nonchalantly dropped in a quote from Dizzy Gillespie’s “Oop Bob Sh’Bam” in the middle of his urgent solo on this driving piece. Tardy’s probing solo here revealed him to be coming more from the Wayne Shorter school, given to oblique asides and unpredictable pauses in the course of developing his potent ideas. Bassist August was the engine on this piece, spurring Villafranca on to some McCoyesque heights with his insistent, deep-toned walking. And Lewis, always the extraordinary rhythmatist, slipped easily from son montuno to swing with remarkable flexibility on the kit. They concluded their set with a funky soul-jazz number, “The Big Plus,” that had Tardy referencing Eddie Harris’ solo on “Compared to What” and Stafford quoting from Benny Bailey’s solo on “Cold Duck Time.” After his set, Villafranca revealed backstage that this infectious groover was actually inspired by Keith Jarrett’s Treasure Island, a mid ’70s Impulse album that carried some gospel-funk overtones (particularly on tracks like “Blue Streak” and “Sister Fortune”).

Chuchito Valdes led his Afro-Cuban big band through an exhilarating set of son montunos, graceful danzons and cha-cha-chas associated with his father Bebo Valdes that had some Caramoor patrons dancing just outside the tent covering The Venetian Theater.

For the eagerly-awaited finale, Chick Corea led his Freedom Band (bassist Christian McBride, alto sax burner Kenny Garrett and ageless wonder Roy Haynes on drums) through a strong set that included Chick’s jaunty “Bud Powell” (a tribute to the great bop pianist), his edgy jazz waltz “Psalm,” an interpretation of the Thelonious Monk staple “Monk’s Dream,” along with a gorgeous reading of the ballad “We’ll Be Together Again” that had Garrett blowing the plaintive melody and Haynes underscoring the piece with masterful aplomb on brushes. They closed on a high note with a rendition of Corea’s uptempo burner “Steps” (from his 1968 landmark recording with Haynes and bassist Miroslav Vitous, Now He Sings, Now He Sobs) that had Garrett reaching into his Pharoah Sanders bag during his incendiary solo. Haynes matched Garrett’s blowtorch intensity stride-for-stride on this heated number before breaking loose for a show-stopping solo of his own as Corea, McBride and Garrett stood behind the drum set and shouted encouragements as the 85-year-old drumming marvel, decked out this evening in a golden satin shirt and white pants, did his thing.

Feeling frisky – this was the final stop on a month-long tour of one-nighters that started in Europe – the band encored with a straight blues that suddenly turned into a tambourine-shaking gospel blow-out which had the excited audience shouting out and clapping along like it was a Baptist church service. It was the perfect benediction to a transcendent day of music in the woods.

The 2022 Newport Jazz Festival’s three days of sunshine were bracketed, more or less, by a pair of all-star ensemble jams that included Christian McBride. … END_OF_DOCUMENT_TOKEN_TO_BE_REPLACED

In its first full edition since the onset of the pandemic, and with a new director of programming, the Festival International de Jazz de Montréal … END_OF_DOCUMENT_TOKEN_TO_BE_REPLACED

Among the many physical, spiritual, and institutional losses related to the still-ongoing pandemic is that of Los Angeles’ renowned Playboy Jazz Festival (PJF) at the … END_OF_DOCUMENT_TOKEN_TO_BE_REPLACED

It’s difficult to imagine what the stage and the audience would have looked like at Gaillard Center in Charleston, South Carolina, if Rhiannon Giddens’ new … END_OF_DOCUMENT_TOKEN_TO_BE_REPLACED