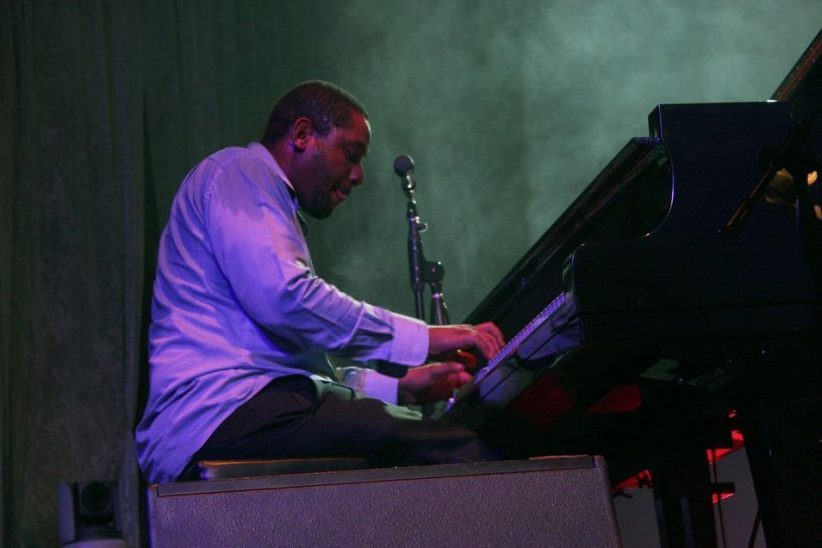 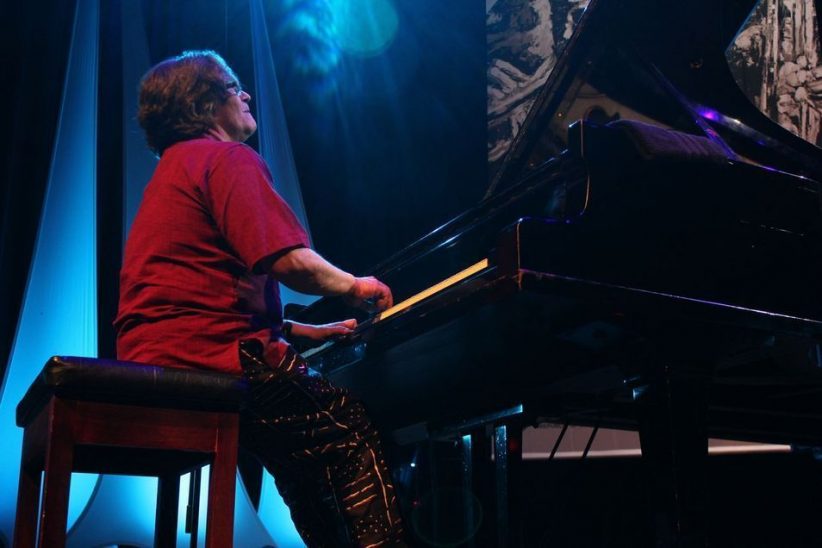 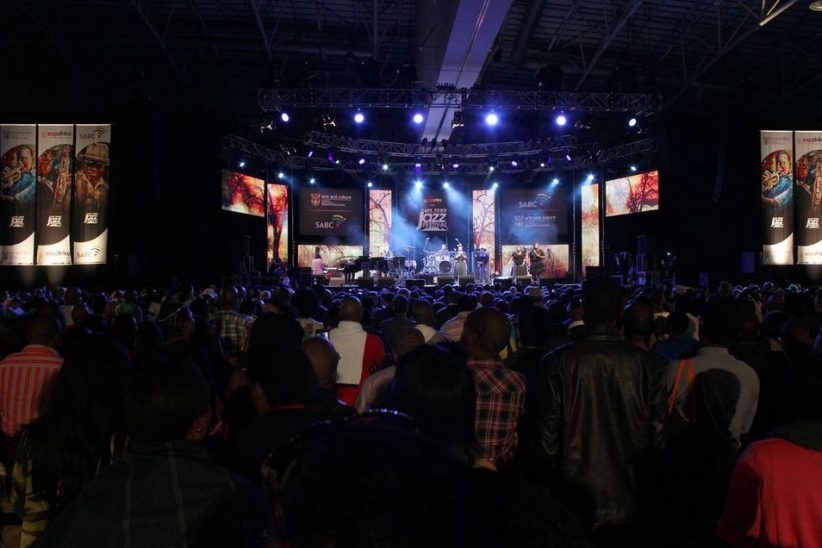 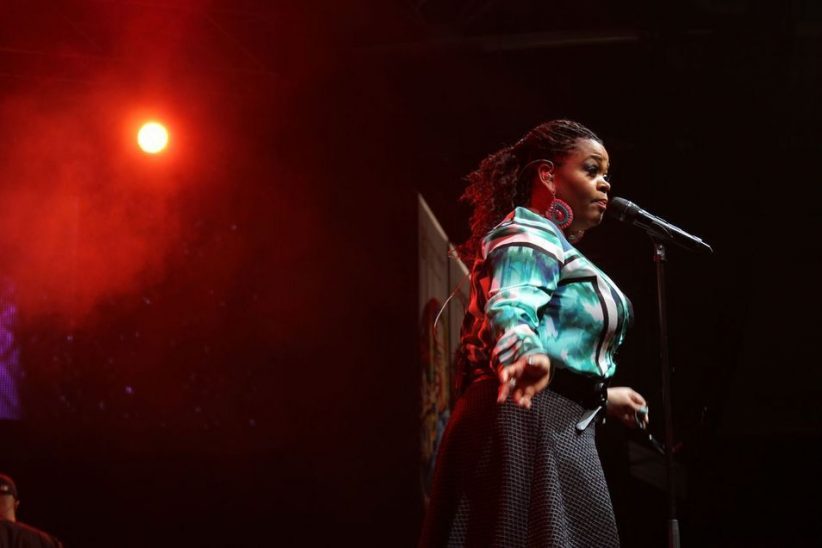 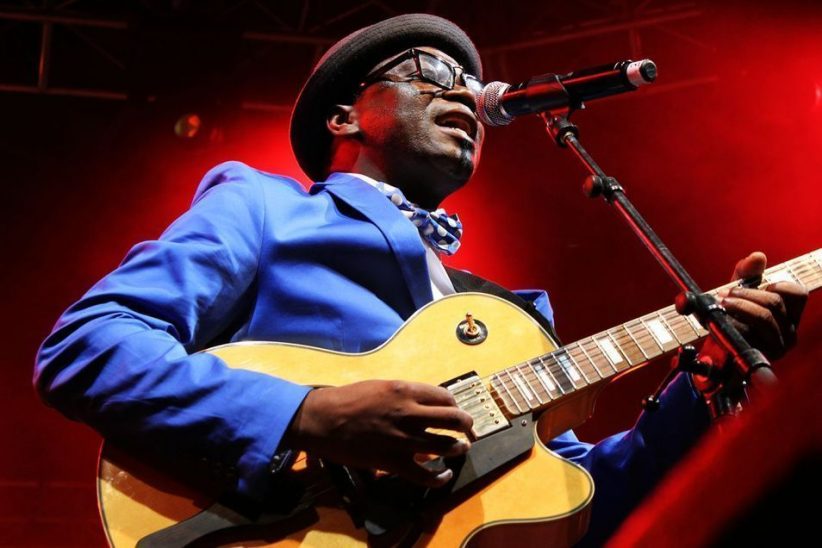 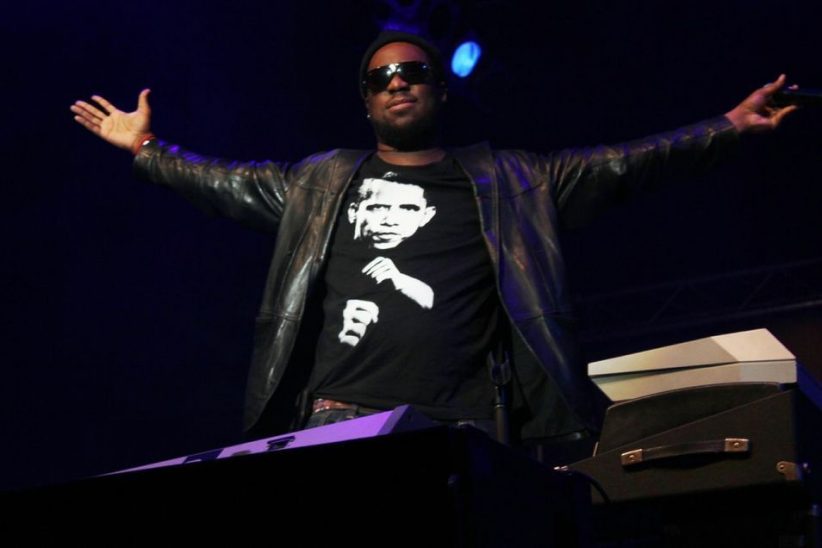 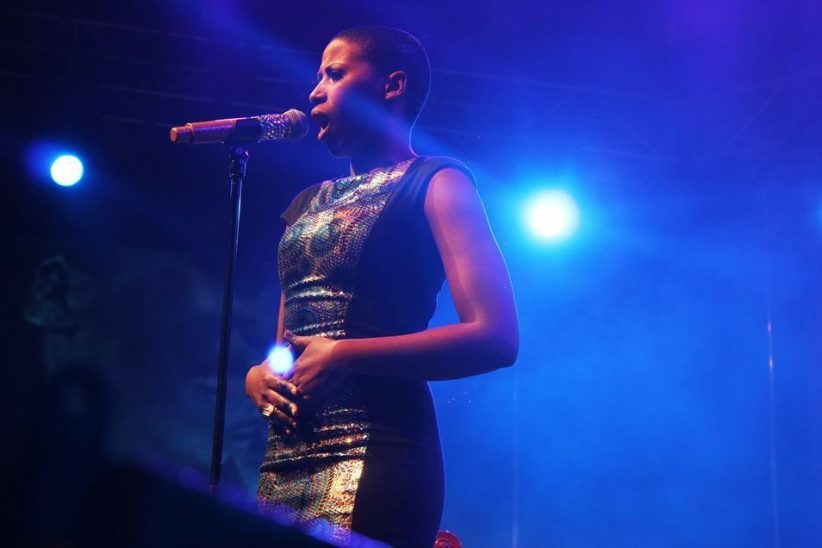 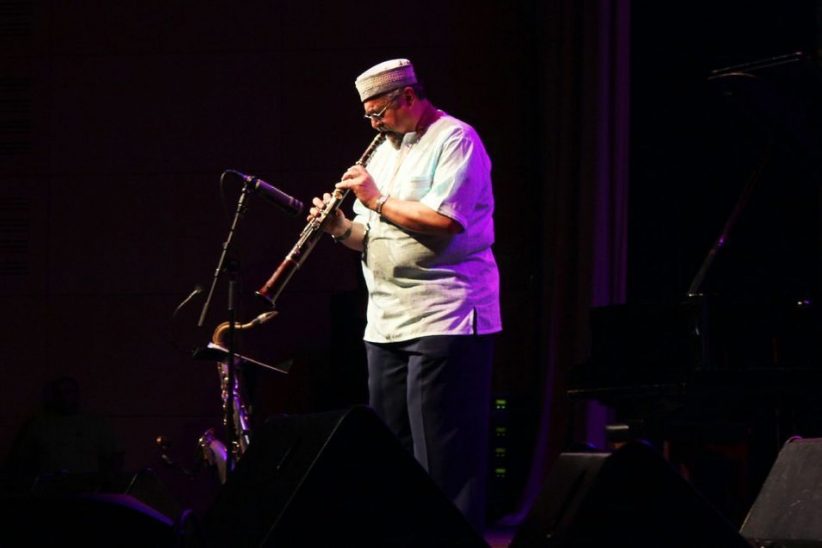 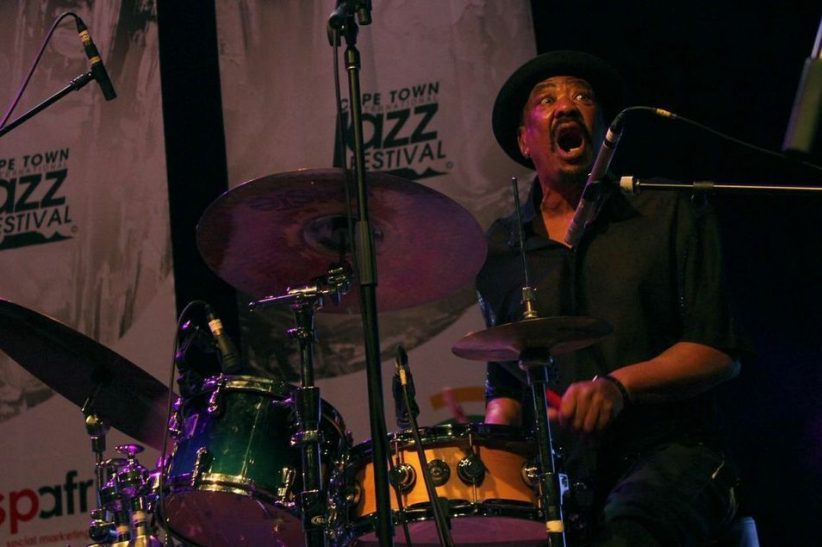 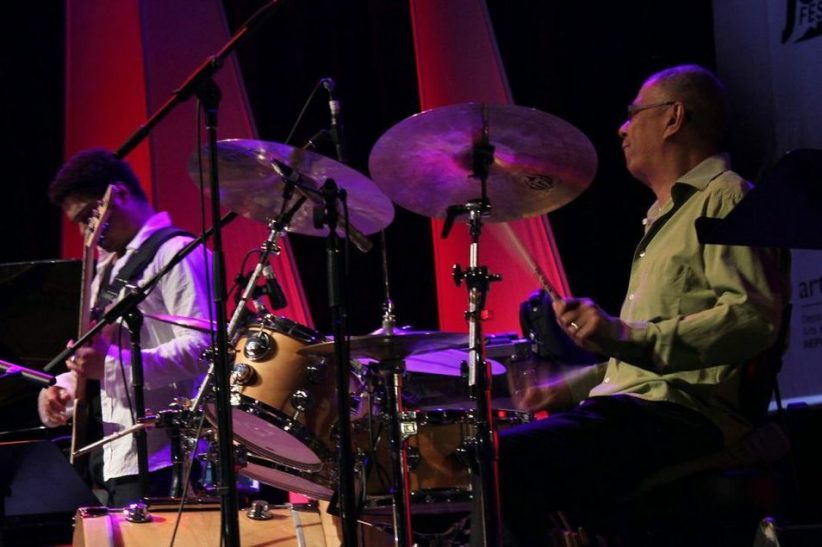 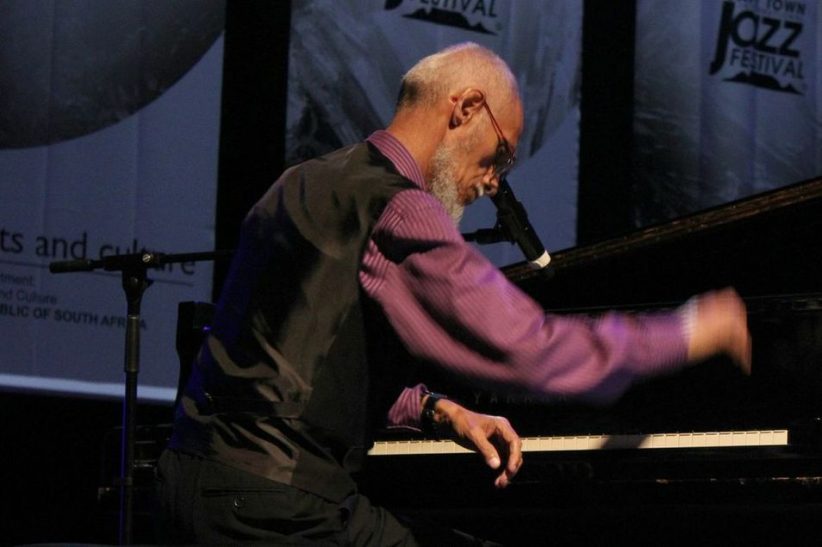 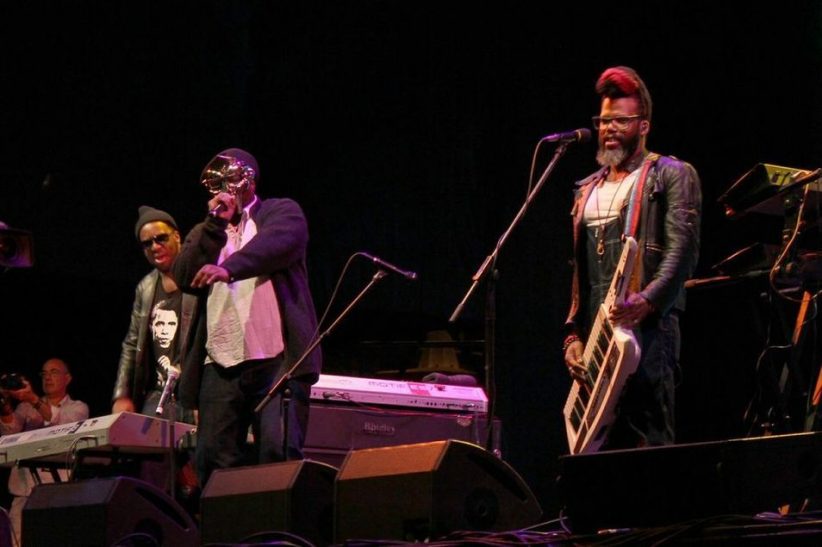 The South African drummer Louis Moholo spent his set at the Cape Town International Jazz Festival drawing thick, arching lines of sound and inviting the audience to read between them. He worked in multiple dimensions, drums rolling and spreading out, his quintet building dark mists of harmony that somehow felt devilishly optimistic-even when they made a minor chord, or no particular chord at all. The songs reached into various aspects of South African tradition, but the group’s treatments demanded vigilance, pushing past those traditions and renewing them.

Toward the end of the show, Moholo, 73 years old and a standard-bearer of South Africa’s long, fruitful flirtation with American jazz, got up as the band played and started stalking the stage. He doubled back on himself and hissed into his bandmates’ ears, treating listeners’ attention like a dog on a leash. All of a sudden he shouted, “No, no, baby, no!” and Fany Galada, the band’s vocalist, answered, “Yes, baby, yes, yes!” The audience puzzled, and laughed. The group fell to a simmer and Moholo dropped back onto his stool. He called out for “Yakhal’ Inkomo,” a cantering South African jazz standard, and almost before the band could collect itself he was igniting the drum kit with something between a rock beat and a swing rhythm. (It was a lot like the quivering glide that you’ll hear on classic Pharoah Sanders records.) Moholo sent shocks through his cymbals without striking them very hard.

When the set ended, people filed out of the auditorium, bound for one of the festival’s other four stages, and the room filled with a kind of ecstasy that’s sparked by surprise. That’s Moholo’s thing: He makes a complicated argument about what this music is for-mischief, insurgency, power reversals, upsetting what’s still. And in his own taciturn way, Moholo’s performance seemed to symbolize the mood of the entire festival.

The 14th annual Cape Town International Jazz Festival hosted upwards of 30,000 people over the evenings of April 5 and 6; it is sub-Saharan Africa’s biggest musical happening. South Africa has a special relationship with American jazz, which came to symbolize an assertion of freedom during apartheid, and was often banned as a result. In the 1960s, the region developed its own genre, Cape jazz, blending American improvisation with grooving South African rhythms and revolving vamps. The idiom works as a metaphor for South Africa’s idea of what jazz might mean-something broader, an ethic of joyful exchange more than a set of boundaries-and it has entered the country’s mainstream more than any jazz has entered America’s over the past 50 years.

Moholo isn’t a Cape-jazz musician; he plays acerbic avant-garde jazz, and spent most of his career away from South Africa, waiting out apartheid and playing with musicians like Cecil Taylor and Evan Parker. But the festival’s openness to ambiguity, and the wonder that sometimes came with it, made Louis Moholo feel like its perfect representative-even if the few hundred listeners at his set, in the festival’s theater venue, paled next to the thousands who flocked to the main stages for performances by Jill Scott, the American R&B singer, and Thandiswa Mazwai, the neo-traditional South African pop star. (With five stages hosting more than 40 acts over two nights, you were guaranteed to miss out on something you would have liked-a good sacrifice to be making.)

Another eminent drummer whose set pulsed with a commitment to opening up possibilities was Jack DeJohnette. He performed with the electric bassist and effects pedal whiz Matthew Garrison, and the saxophonist Joe Lovano. The trio’s set started with a grainy flow of thick, electric harmony coming through a laptop, and DeJohnette played with a calculated reticence, leaving lots of space and then invading it with snare-drum rolls and cymbal explosions. Lovano’s opening cadenza on his own “Mystic,” the second tune, was liquid and beautiful, tracing a curve that refused to reveal itself; Garrison, entering, conjured blurry effects and sometimes played his five-string bass like a guitar, plucking chords high on the neck. The set let the varied songs keep their shapes-sometimes angular, sometimes sprawling-but always dug into their nooks, then found secret passageways out.

The same bewildered joy I sensed after Moholo’s set took hold around DeJohnette. You could feel Capetonians thrilling at the rare chance to sample new developments in American jazz. In a city where wealth remains disproportionately concentrated in the hands of whites and tourism is a predominant industry, most things with a considerable entry price skew Caucasian; not so with the Cape Town festival, which cost about $50 per night or about $70 for both, and boasted a strong majority of black listeners.

On the flipside, the festival lets visiting foreigners-of whom I found a small but energized few-explore a swath of what’s new in the motherland of jazz improvising. About half of the acts here were South African and many went past the pale of jazz. Ben Sharpa is an invigorating young emcee who rapped over ominous, dubstep-like beats, his lyrics challenging the inequity that plagues any capitalist country, apartheid or not. And Jimmy Dludlu, a guitarist with an enormous and well-earned following, offered a South African alternative to George Benson, singing in unison with his guitar as his band cranked out spiked, sunny grooves.

And there were plenty of South African musicians capable of satisfying the straight-ahead jazz doctrinaire, too. Afrika Mkhize is a young, broad-shouldered pianist with a barreling right hand that’s constantly asking questions, and seems partly descended from McCoy Tyner. He led a septet through a set of original tunes, moving from a postbop arabesque-horn harmonies spiraling over an aggressive, straight-eighth-note feel-to a ballad that transfigured into an earthy, heavy-footed prowl. At unpredictable moments listeners jumped up, clamoring and shouting and clapping.

Then you had Ibrahim Khalil Shihab, a jazz pianist of an older generation who’s careful not to let his elegance override a sense of pathos, and who deserves international acclaim. Early on in the festival’s first night, he performed in the same theater that Moholo and DeJohnette would later occupy. Shihab began his set alone, sitting at the lower end of the piano and playing two-note harmonies in each hand that alternated and fed off each other; they made a sort of resonant energy, and called up the rippling, clarion touch of Philip Glass’ piano on Glassworks. Shihab moved gracefully up the keyboard, working through tinkling free-jazz flights that linked Cecil Taylor with Debussy. Eventually he worked his way around to the melody of “Guess I’ll Hang My Tears Out to Dry,” stating it in two-handed chords that landed like paper on pavement, then wafted up, suspended. (For an example of Shihab’s work, find his excellent Solo Piano: The Tempest Live Series. It’s available on Spotify, but is credited to “Ebrahim Kalil Shihab.”)

Since this was one of the festival’s first performances, there was no way to know that contradiction was going to be a motif. But it sure was confounding when Shihab called his quintet onstage and proceeded to play a set of tunes that declared their melodies simply, and kept a constant level throughout all the solos: placid, plastic, unencroaching.

There were other moments when the festival’s prevailing sense of uncertainty wasn’t productive. Outside the convention center where the event was held, hordes of people were turned away on the first night after they apparently bought counterfeit tickets from street vendors. And onstage, some of the musicians seemed to be groping for logic as they went along. In certain cases it might have been the jetlag: Members of the Steve Turre Quintet had had their 15-hour flights severely delayed, and arrived the day of the show. The band’s mix of casual swing and we-can-all-enjoy-this samba grooves didn’t live up to the all-star lineup (Turre on trombone and conch shells, Billy Harper on saxophone, Larry Willis on piano and Dion Parson on drums). The Spanish piano star Chano Domínguez also suffered from travel complications: He had to perform without Francisco Mela when the drummer’s flight got canceled, and the set never took off as a result.

In the case of the Robert Glasper Experiment, performing on the festival’s second night in what might have been a thrilling collaboration with the underground hip-hop emcee MF DOOM, the problem was inborn: The band’s investment didn’t match its ambition. Working with a replacement rhythm section, the group looked decidedly dapper but sounded either disoriented or disengaged. Sometimes the quartet waded for five minutes in a groove laid down by Burniss Travis, its substitute bassist, without ever getting more than knee-deep. Other times, Casey Benjamin’s alto saxophone-doused in fuzzy, harmonizing effects-circled itself for long stretches but didn’t invite the band to join the chase.

When DOOM came on for what ended up being about 20 minutes, his presentation proved as reclusive as his personality (he hardly ever plays live, and wears a silver mask when he does). His flow is effective partly because it’s desultory; he mumbles out mordant lines that are astoundingly rich in wordplay, but always seems unimpressed-either by his own thoughts or by your ability to get them. It could have worked as well as it does on record, if only the band had offered a countervailing force: generosity, passion, something laid on the line.

Thankfully, those things were all in full stock when Thandiswa Mazwai played that night at the Kippies Stage, the festival’s main concert hall. One of South Africa’s biggest stars, she began her career in the 1990s with a popular house band called Bongo Maffin (house music, with its relentless focus on dance rhythm, is an idée fixe in South Africa). Since her solo debut in 2004, Mazwai has held onto some of that band’s charged energy but has circled back to incorporate Afropop, jazz and traditional Xhosa music.

Early in her set, she offered up a tender ballad as “a tribute to all the mamas-people like Miriam Makeba,” then dove into a buoyant tune that started with light, speckled guitar and found its way to a three-beat rhythm driven by clopping percussion. The song was “Ndilinde,” Xhosa for “wait for me,” and her voice shot across the enormous audience like a beam-high and sharp but not nasal. When the liquid melody of the song’s hook came around, the room sent that voice surging back to her on the strength of 1,000 vocal cords. It was a call, a response, a vast and personal interaction, an investment in transcendence. It wasn’t jazz, but jazz could learn something from it.

Among the many physical, spiritual, and institutional losses related to the still-ongoing pandemic is that of Los Angeles’ renowned Playboy Jazz Festival (PJF) at the … END_OF_DOCUMENT_TOKEN_TO_BE_REPLACED

It’s difficult to imagine what the stage and the audience would have looked like at Gaillard Center in Charleston, South Carolina, if Rhiannon Giddens’ new … END_OF_DOCUMENT_TOKEN_TO_BE_REPLACED

“It’s time to imagine a place where we can come together,” Danilo Pérez said from the hallowed stage of Washington, D.C.’s historic Sixth & I … END_OF_DOCUMENT_TOKEN_TO_BE_REPLACED

At the Zeiders American Dream Theater in Virginia Beach, Va., between April 8 and 10, the Vocal Jazz Summit convened in person for the first … END_OF_DOCUMENT_TOKEN_TO_BE_REPLACED