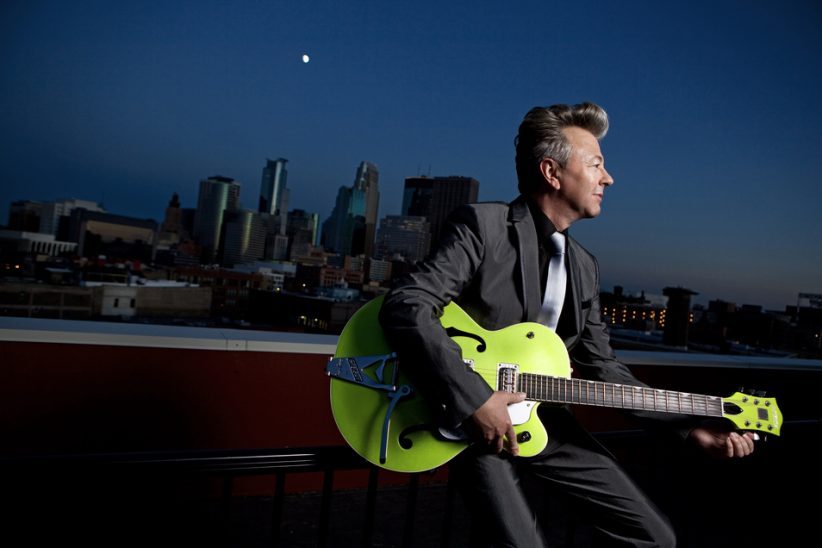 With the exception of certain ghost and repertory ensembles, many of the jazz big bands making a go of it in 2009 can safely be termed postmodern: They relish dissonance, free playing and through composition; incorporate the sonics and textures of experimental rock; evoke the cinema, sometimes turning concerts into multimedia exhibitions. The influence of Björk often seems to supersede that of Count Basie. There’s a desire to sidestep the kitsch and nostalgia associated with the swing era—to embrace the architecture but reinvent the attitude and pull from all aesthetic corners.

The Brian Setzer Orchestra, which is currently touring the states with its Christmas program, revels in kitsch, and will hopefully continue to do so. Its concert at the Sovereign Performing Arts Center in Reading, Pa., was more than 90 minutes of perfectly conceived big-brass pizzazz, jump-blues boogie and some of the best rockabilly currently being performed. Serious-minded jazz fans might call it a guilty pleasure or dismiss it outright, but they’d be missing the point. For what it was, Setzer’s show was state of the art.

Singer and guitarist Setzer first rose to prominence in the early 1980s as the frontman for rockabilly revivalists the Stray Cats. After the Stray Cats disbanded, he formed the swing-reviving Brian Setzer Orchestra in the early ’90s, and the group made its recorded debut in 1994. Setzer became an unlikely commercial force again toward the dawn of the millennium, when the strange, directionless pop and rock climate of the late 1990s allowed for a brief but spirited retro-swing revival. The fad had more to do with bowling shirts than chops, and did little to expand jazz’s hardcore audience, but Setzer’s band gained some momentum that would help it remain economically viable through the 2000s.

At Reading, there was calculation and fine-tuning across the board: in the stage setup, which featured a changing backdrop and book-ended Setzer’s 17-piece band with Christmas trees and nutcrackers; in the stage-wear, which included leopard-print smoking jackets for the band and modest Mrs. Claus outfits for two female back-up singers; in the choreography, with cutesy synchronization in the horn section and rockabilly-bred acrobatics from upright bassist John Hatton; and in the repertory, which balanced super-charged arrangements of Christmas standards with Stray Cats hits and recent album cuts (like the ballad “Lonely Avenue”). The strong sense of showmanship, split among the swing and jump eras, early rock and roll and Las Vegas, entertained without becoming cloying. The same could be said for the sound, which was enormous but carefully balanced and not overly loud.

But despite the craftsmanship in the program—which felt determinedly old-school—there was innovation in the format. The crack horn sections played straightforward, stout arrangements full of crisp unison lines that served to punctuate and underscore the thrust created by Setzer, Hatton and drummer Tony Pia, whose playing took the Rich/Krupa/Bellson school in a more rock-oriented direction. Setzer crooned and soloed on his Gretsch hollow-body guitars at length, but his technique offered a feeling of modesty, even after multiple choruses: He alternated his blues and rockabilly licks with jazz phrasing that wove through the changes and Chet Atkins-style chordal improvisation.

When the bandleader turned the spotlight toward his horn players—and he did graciously, announcing their names to elicit ovations—their solos were resolute and unerringly in the pocket. There was terrific, plunged, high-note playing from trumpeter Steve Reid on “Boogie Woogie Santa Claus” and brawny, big-toned phrases by musical director/tenor saxophonist Tim Missina throughout.

A trio set with Hatton and Pia pointed up how, no matter how precocious he seemed in the ’80s, Setzer by no means arrived fully formed. In this spare setting, his singing and guitar playing sounded fleshed out and overwhelmingly assured. After more holiday material (“Run Run Rudolph,” “Jingle Bell Rock,” “Blue Christmas”) the threesome turned to rockabilly, including the Stray Cats’ “Rock This Town,” which began in its original trio configuration and expanded midway through to include the orchestra. The evening began closing in with Frank Comstock’s nimble arrangement of “The Nutcracker Suite,” which, along with “Angels We Have Heard on High,” highlighted Setzer’s penchant for swinging-the-classics novelty.

The concert’s penultimate tune was “Jump, Jive an’ Wail,” and it managed to call forth more than one bygone era. With Setzer’s terse, legato solo—maybe the retro-swing revival’s most indelible musical phrase—it recalled the late ’90s, Setzer’s second period of pop stardom; it also, by default, looked back to Louis Prima’s 1957 original.

But there was something else happening, and it had more to do with the scene than the music. By show’s end, concertgoers had moved from their seats and danced to “Jingle Bells” in front of the stage while fake snow fell from the rafters. Here, at an age-old, 1,700-capacity theater in a pretty remote Pennsylvania city, a sold-out crowd of general music fans became enthralled with a touring swing orchestra. In 2009, the Brian Setzer Orchestra felt like some prewar territory band reincarnate.

“It’s time to imagine a place where we can come together,” Danilo Pérez said from the hallowed stage of Washington, D.C.’s historic Sixth & I … END_OF_DOCUMENT_TOKEN_TO_BE_REPLACED

At the Zeiders American Dream Theater in Virginia Beach, Va., between April 8 and 10, the Vocal Jazz Summit convened in person for the first … END_OF_DOCUMENT_TOKEN_TO_BE_REPLACED

The Big Ears Festival returned to Knoxville in a big way in late March, drawing an estimated 30,000 music enthusiasts from across the U.S. and … END_OF_DOCUMENT_TOKEN_TO_BE_REPLACED

Let’s get this out of the way: The Savannah Music Festival is not a jazz festival. Held over the course of 17 days in late … END_OF_DOCUMENT_TOKEN_TO_BE_REPLACED