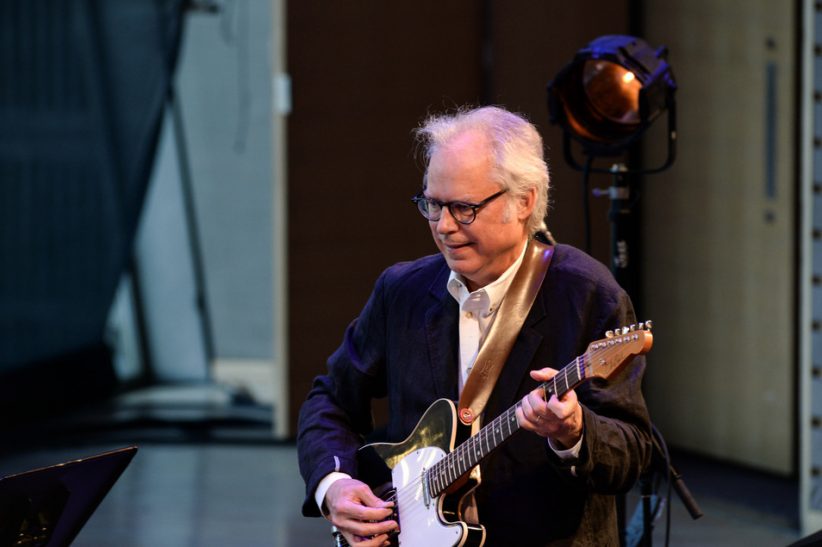 Bill Frisell performs his "Guitar in the Space Age" program at Jazz at Lincoln Center; June 2014 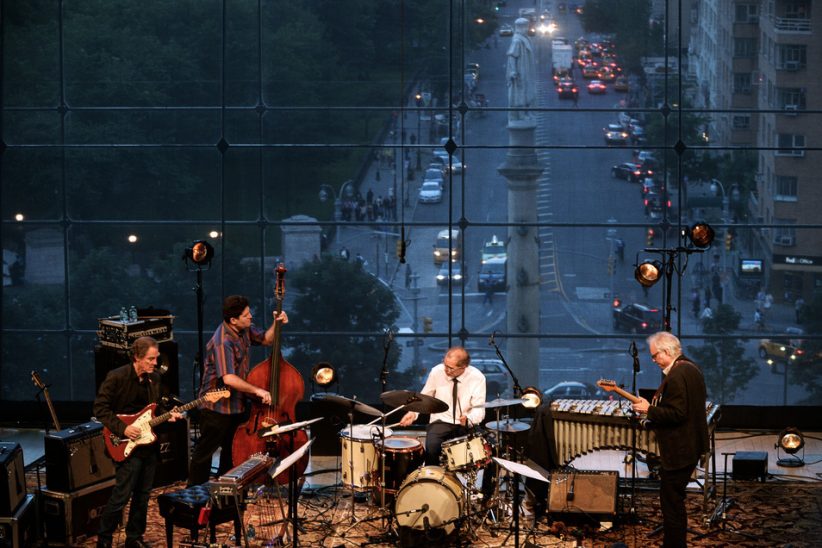 “Does it help to let you know I was born in 1951?” asked Bill Frisell last Friday at Jazz at Lincoln Center’s Appel Room, before easing into the second show of “Guitar in the Space Age,” a program of the postwar country, blues and rock ‘n’ roll that inspired him as a boy. Accompanying Frisell were Greg Leisz on pedal steel and guitar, Tony Scherr on upright and electric basses and Kenny Wollesen on drums and vibraphone-longtime collaborators with an especially developed understanding of the leader’s style-melding, chamber-like take on American music.

To know that Frisell is a baby-boomer was important, yes. The music he played, by the Beach Boys, Duane Eddy, the Chantays, Link Wray and others, is the stuff of childhood innocence for the Vietnam generation-the beach-party calm before the storm of cultural explosions that would transform America in the second half of the ’60s. But other résumé bullets would have been equally beneficial in making sense of the following 90 minutes: that Frisell performed in one of jazz’s most deeply interactive trios, with Paul Motian and Joe Lovano, for three decades; or that he helped to redefine the jazz guitar as a textural instrument while a go-to player for ECM Records. To put it more directly, this was a rock ‘n’ roll gig executed with the temperament and group dynamic of postbop.

Because the repertoire was so familiar, you couldn’t help but think of the original arrangements, and then of how Frisell and company were artfully remaking them: turning streamlined melodies into polyphony on the frontline, reinventing standard backbeats with swing and groove and space. Even the action onstage dipped in the direction of a communicative jazz band, with Frisell facing and lurching toward his rhythm section. (It’s a kind of anti-showmanship that works better in the Village Vanguard than in a concert hall, and Frisell owned up to that fact with a joke: “I hope you don’t mind looking at my rear end.”)

Frisell is a melodist first and foremost, and a lot about this set was strikingly beautiful. Pete Seeger’s “Turn! Turn! Turn!” skewed harder toward Nashville than the Byrds did; the Beach Boys’ “In My Room” made you wonder why the Lennon-McCartney book has become standard jazz source material but Brian Wilson’s songs have not; and Frisell’s “Shortest Day” offered the sort of bittersweet earworm motif you want to hear again as soon as it ends.

This program and its related album, to be released in October, made plainer than usual the idea that Frisell is a guitar fanatic but doesn’t subscribe to the many tropes that plague the instrument. He clearly relishes the electric guitar as a marvel of American technology. He used his trusted combination of Fender Telecaster-style ax, Fender tube combo amp and delay and looping effects to achieve his melancholy, art-house version of surf and vintage Nashville tone. But his take on this chopsy repertoire-Jimmy Bryant and Speedy West; surf instrumentals, with their emphasis on rapid-fire picking-was expectedly genteel. He focused on sonics, the liquid give-and-take between himself and Leisz, and his savvy negotiation of harmonic and rhythmic contours. (You could say the same for his jazz playing, but jazz guitar has more forebears who placed elegance above technical flash.)

You could easily accuse Frisell of being too precious with this material. Why let Junior Wells’ “Messin’ With the Kid” simmer and not burn? But there are so many other places to go for that. And to his credit, Leisz picked up the slack for conventional guitar heroism, countering Frisell’s inclination to, as Ron Carter would put it, “play clouds.”

Another real achievement here had to do with the handling of instrumental surf music, a midcentury phenomenon that deflated with the arrival of the Beatles. Its influence on popular music is incalculable-it expanded pop’s sonic language toward psychedelia and set new standards for virtuosity in rock ‘n’ roll-but its legacy is one of kitsch and cult devotion. (Most of the great surf revival acts of the past 30 years have relied on a very good visual gimmick.) Frisell made surf music a plainclothes proposition, taking on genre standards like “Pipeline” in a way that restored their seriousness; these were and are compositions full of shadowy feeling and immaculate tunefulness. Wollesen’s secondary work on vibraphone, which he employed during atmospheric rubato introductions, further captured the intelligence and noir cool of first-generation surf, lounge and exotica.

The 2022 Newport Jazz Festival’s three days of sunshine were bracketed, more or less, by a pair of all-star ensemble jams that included Christian McBride. … END_OF_DOCUMENT_TOKEN_TO_BE_REPLACED

In its first full edition since the onset of the pandemic, and with a new director of programming, the Festival International de Jazz de Montréal … END_OF_DOCUMENT_TOKEN_TO_BE_REPLACED

Among the many physical, spiritual, and institutional losses related to the still-ongoing pandemic is that of Los Angeles’ renowned Playboy Jazz Festival (PJF) at the … END_OF_DOCUMENT_TOKEN_TO_BE_REPLACED

It’s difficult to imagine what the stage and the audience would have looked like at Gaillard Center in Charleston, South Carolina, if Rhiannon Giddens’ new … END_OF_DOCUMENT_TOKEN_TO_BE_REPLACED