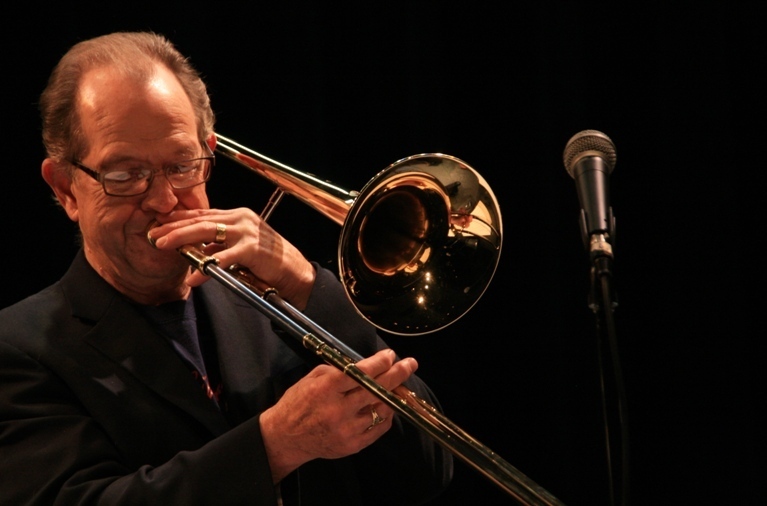 Every once in a while, it is good to revisit the first four decades of jazz to get refreshed at the well from which all of today’s jazz music (with its many permutations) has flowed. Trombonist Bill Allred’s Orlando-based band provides a great look back at the earliest days of jazz, from ragtime up through the big band era, adding a bit of modernist soloing to keep things fresh.

The band devoted nearly half of its time to New Orleans and Louis Armstrong because of Pops’ sheer impact on popular music from his roots in the Crescent City and his travels to Chicago to join King Oliver en route to becoming an international star. “Dippermouth Blues,” “When The Saints Go Marching In,” “West End Blues,” “Struttin’ With Some Barbecue” and “What a Wonderful World” provided strong features for the octet’s five-man horn line.

The band features Allred and Herb Bruce on trombone, Bobby Pickwood and Don Johnson on trumpet, Terry Myers on tenor sax and clarinet, Jay Mueller on bass, Randy Morris on piano and Eddie Metz Jr. on drums. Clever arrangements made this little big band, at times, sound like a unit nearly double its size. Pickwood had several fine vocal features, including “…Wonderful World” and the Rosemary Clooney hit “Still On the Road.” Myers was featured right out of the gate on clarinet on a Matty Matlock arrangement of “Saints.”

The brand made brief musical stops on its route up the Mississippi River from New Orleans with pianist Morris (a ragtime marvel) featured on W.C. Handy’s “Memphis Blues” while Bruce and Allred were spotlighted in a two-trombone roll through “St. Louis Blues.”

The big band segment featured chestnuts from that era, including Lionel Hampton’s “Flyin’ Home,” Duke Ellington’s “The Mooche,” Charlie Barnet’s “Skyliner” and Lester Young’s spirited but oddly named “Tickle Toe.” Some interesting medleys and pairings brought together early jazz and more modern works that stretched the concert well beyond a Dixieland feel that could have dominated such a “classic jazz” event.

One was an exuberant pairing of Dick Contino’s 1947 arrangement of “Lady of Spain” with melodic segments from Chick Corea’s 1971 modern jazz composition, “Spain.”

Allred also featured Nelson Riddle’s Grammy-nominated “Theme From Route 66” before the band tackled the classic Bob Haggart-Ray Bauduc composition “Big Noise from Winnetka,” which was first recorded in 1938 when its creators were members of Bob Crosby’s Bobcats. (The pairing was appropriate given that Winnetka, Ill., is 16 miles from historic Route 66’s easternmost point in downtown Chicago.) In this version, Pickwood took on the melody’s whistling intro. Mueller played bass with his left hand in a collaborative, stirring solo on which Metz drummed on the hollow body and then the strings of the upright bass.

The CJB closed out the evening by going full circle: back to New Orleans via the Second Line tune “Joe Avery Blues.”

Some credit for the creation of Allred’s band could go to Walt Disney. Allred moved to Orlando 40 years ago from his native Illinois to join a sizable group of fine musicians who joined the Disney family as members of its entertainment corps, where the work ranged from lounges to uniformed marching bands. For Allred, that gig lasted five years. He says Disney downsized its full-time musicians when it realized the numbers were uneconomical. He and some others then moved to Rosie O’Grady’s, a downtown Orlando dance hall that had a full-time complement of dancers and singers that ran strong in the 1980s and 1990s. For Allred, that phase lasted about 15 years. The venue went out of business not long after Walt Disney World and Universal Studios added their own on-premises nightclubs.

Allred’s band, formed 22 years ago, includes former, current and substitute musicians from Walt Disney World. Some also have Rosie O’Grady’s roots. They now play festivals, jazz parties, theaters and cruises in the U.S. and abroad. They’ve even been featured on the riverboat Mississippi Queen, taking the music up and down the river that was America’s early musical pipeline.

“It’s time to imagine a place where we can come together,” Danilo Pérez said from the hallowed stage of Washington, D.C.’s historic Sixth & I … END_OF_DOCUMENT_TOKEN_TO_BE_REPLACED

At the Zeiders American Dream Theater in Virginia Beach, Va., between April 8 and 10, the Vocal Jazz Summit convened in person for the first … END_OF_DOCUMENT_TOKEN_TO_BE_REPLACED

The Big Ears Festival returned to Knoxville in a big way in late March, drawing an estimated 30,000 music enthusiasts from across the U.S. and … END_OF_DOCUMENT_TOKEN_TO_BE_REPLACED

Let’s get this out of the way: The Savannah Music Festival is not a jazz festival. Held over the course of 17 days in late … END_OF_DOCUMENT_TOKEN_TO_BE_REPLACED