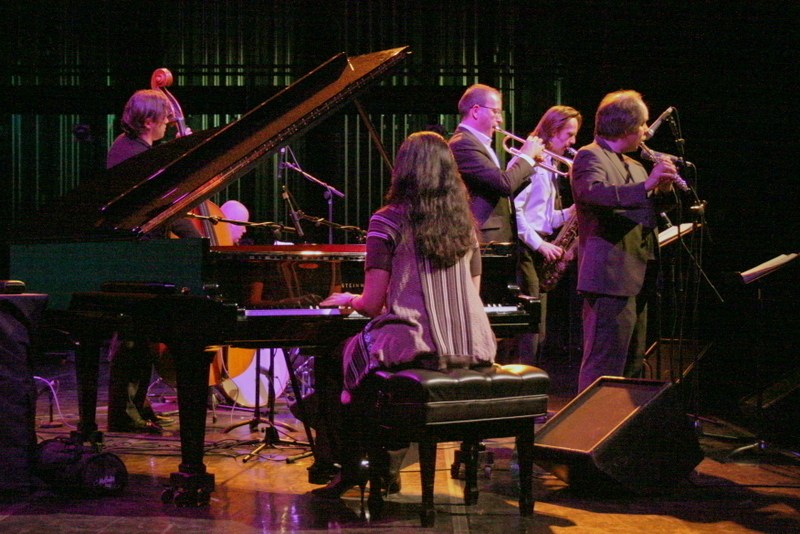 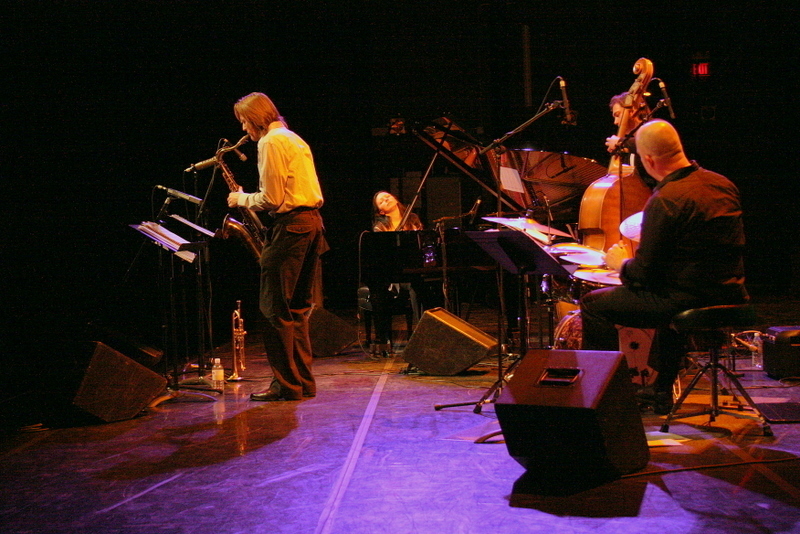 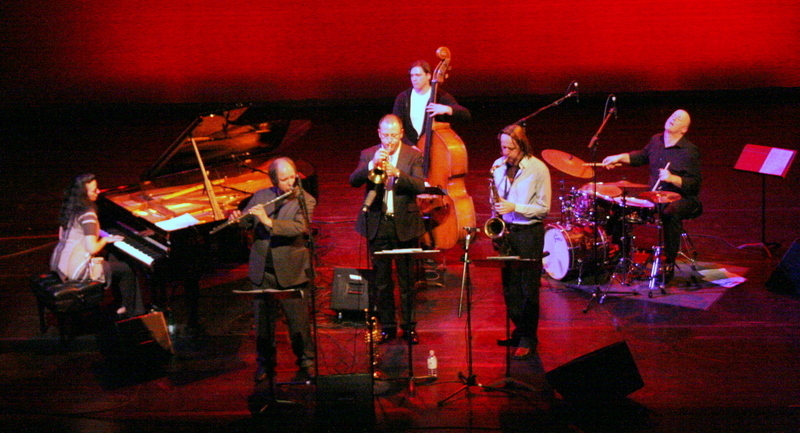 The Bible Belt isn’t exactly a hotbed of jazz performance, so down here in the South Carolina Upstate (Greenville/Spartanburg area) we don’t mind a little travel time to catch a good concert. And although top acts like the Lincoln Center Jazz Orchestra, John Pizzarelli and Regina Carter have played at Greenville’s or Clemson’s theaters over the last year, the most consistent jazz concert programs are “up the mountain” (as they say here) in Asheville, North Carolina. One of Asheville’s leading jazz presenters – others are the local Jazz Composers Forum and NCU-Asheville – is the WNC (Western North Carolina) Jazz Society, presided over by Bo Farson, which began its 8th season at the Diana Wortham Theatre the first Sunday in March with an adventurous and challenging program from the Amina Figarova Sextet.

Figarova, an Azerbaijani now living in the Netherlands, creates a distinctive, highly orchestral ensemble sound with her Dutch and Belgian Sextet, consisting of her husband, Bart Platteau, flutes; Ernie Hammes, trumpet and flugelhorn; Marc Mommaas, tenor sax; Jeroen Vierdag, bass, and Chris “Buckshot” Strik, drums. The two-set concert presented music from Figarova’s recent Above the Clouds CD (Munch Records) plus pieces being developed for a new recording, all of them written and arranged by the pianist/leader.

The compositions were complex in their structure, often episodic and extended in form, employing metric patterns and changing tempos and dynamics as well as closely harmonized and/or polyphonic passages. As impressive as the tight blend the horns achieved was the distinctly individual voices of the soloists. Hammes was slashingly crisp and heraldic on trumpet, tenderly mellow on flugelhorn; Mommaas (who is already known around here for his work in the quartet Cotangent he co-leads with Asheville pianist Bill Gerhardt) soloed fervently in the post-Coltrane tradition, often in striking altisimo register; Platteau’s flute provided a calm center of lyricism, and Figarova’s piano solos expanded on themes, especially when her left hand provided a lively counterpoint to her right. Vierdag’s bass was employed in patterns and harmonic contrast as much as rhytmically, and Strik was often a whirlwind of polyrhythms and cross-currents, while always pushing the beat.

Each composition was memorable and unlike any other, Figarova accenting their uniqueness by treating the sextet like a big band, featuring different soloists and solo orders and settings rather than letting everyone solo on each tune. Among the highlights were “Bedtime Story” and “Chicago Split” from the current CD; the first a colorfully impressionistic piece beginning slowly with evocative tom-tom beats erupting into a drum solo and piano and tenor sax solos before retarding the tempo to a coda with polyphonic, tandem improvising from the horns. But most impressive were two new compositions: “Back to New Orleans” channeled dirge-like horns over deep heavy bass in a line with pregnant pauses to conjure the pain and tragedy of Katrina, fleshed out in poignant tenor sax and bass solos. “Flight Number” (a working title) was an infectiously hard swinger (inspired by rushing to catch an airplane in the frozen Canadian Northwest) propelled by Strik’s updating of Gene Krupa’s “Sing Sing Sing” rhythm and Hammes’ soaring trumpet.

Before the concert began, the local duo of guitarist Mark Guest and bass guitarist Tony Black played in the theatre lobby, where food and drink were available. Guest, who lost his home in Katrina and relocated to Asheville, is a resourceful jazz guitarist who calls his music “Bop/Pop,” a label exemplified by his clever juxtaposition of “Scrapple from the Apple” and “Boy from New York City” as well as his jazzy takes on songs like the Beatles’ “Can’t Buy Me Love.” Pre-concert lobby music is a feature of WNC Jazz Society events.

And for updates on concerts by the Asheville Jazz Composers Forum, as well as other jazz events in the Bible Belt, visit their web site.

Among the many physical, spiritual, and institutional losses related to the still-ongoing pandemic is that of Los Angeles’ renowned Playboy Jazz Festival (PJF) at the … END_OF_DOCUMENT_TOKEN_TO_BE_REPLACED

It’s difficult to imagine what the stage and the audience would have looked like at Gaillard Center in Charleston, South Carolina, if Rhiannon Giddens’ new … END_OF_DOCUMENT_TOKEN_TO_BE_REPLACED

“It’s time to imagine a place where we can come together,” Danilo Pérez said from the hallowed stage of Washington, D.C.’s historic Sixth & I … END_OF_DOCUMENT_TOKEN_TO_BE_REPLACED

At the Zeiders American Dream Theater in Virginia Beach, Va., between April 8 and 10, the Vocal Jazz Summit convened in person for the first … END_OF_DOCUMENT_TOKEN_TO_BE_REPLACED