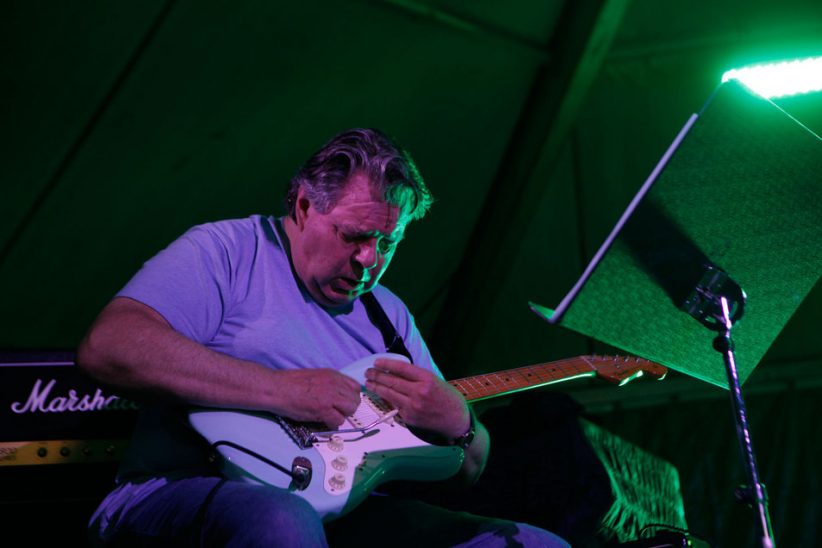 Of all the venerable, major European jazz festivals, the Berlin Jazz Festival, which celebrated its 36th edition earlier this month, boasts a host city that has seen the greatest metamorphoses since its event’s inception. Launched in the wave of cultural assertions in West Berlin in 1964, working through the process of German reunification in 1989 and the wholesale building boom around Berlin after the fall of the wall, the Berlin Jazz Festival has served as a steady force through the waves of change all around it.

In programming, the Berlin festival is invitingly-and proudly-off the grid, occurring deep in the autumn rather than in the heat of the summer festival circuit, when many of the American jazz acts are making the rounds. Geographically and artistically, Berlin’s fest also takes advantage of its position in the relative center of Europe, ushering in sounds from all sides of the German capitol. The 2010 model was especially Eurocentric, following the theme of “made in Europe, mostly.” Whether that focus was a deliberate cultural survey or a cost-saving gesture, or both, the concentrated variety of Euro-jazz made for a rewarding cavalcade of trans-Atlantic variations.

Considering some of the high points of the five-day festival program, the continental map was well-accounted for. This listener’s favorite sets came from Brit-in-Copenhagen Django Bates (with trio, in his madcap but heartfelt Charlie Parker tribute), the lustrous Finnish pianist-harpist Iro Haarla, and seasoned German piano master Joachim Kühn (with the hr Big Band, mixing rugged modal pyrotechnics and Arabic airs in a project called “Out of the Desert”).

Other thrilling performances included the Sunday afternoon art-circus-y splendor of Macedonia’s Kočani orkestar with Municipale Balcanica & Roberto Ottaviano, capped off by a finale reminiscent of the bittersweet end of Fellini’s 8 1/2. (Actually, this Gypsy-Balkan project was a rare representation in the festival of the Eastern European scene, and not directly linked to a jazz muse.)

Adventurous big-band projects have long been intrinsic in this festival’s overview, and the trend was even more in focus this year. The big-band roster kicked off on Thursday night, with Jazz Bigband Graz’s “Urban Folktales … And a Rose,” a multi-genre outing spiced up with the atypical jazz timbres of the Hurdy-Gurdy and the Theremin mastery of Barbara Buchholz.

From France, the Orchestre National de Jazz, featuring vocalist Daniel Yvinec, paid tribute to Billie Holiday with its “Broadway in Satin” program, with mixed results for Lady Day fans. Subtlety and vulnerability-Holiday hallmarks-weren’t always in check. Some of its urbane, archival Weimar Republic-esque treatments, for example, seemed well placed in Berlin, but not when dealing with the painful lynching saga of “Strange Fruit.”

To these ears, one of the more exciting large-ensemble adventures occurred when veteran guitarist Terje Rypdal and Danish trumpeter Palle Mikkelborg met the German new music ensemble zeitkratzer (“time crasher”), which has worked mostly on the outskirts of jazz. Mikkelborg and Rypdal were the upfront protagonists on the recent jazz-rock-ambient project Crime Scene, recorded for ECM with the Bergen Big Band.

Similar ideas, blending the soloists’ unique, sinewy atmospheric sounds with a big-band mesh, were in effect here, but in different ways-less jazz-centric and more in line with the sonic strategies of “new music.” Mikkelborg, for example, would dictate various densities and intensities of group sonics, from ethereal washes to sternum-rattling walls of sound: blissful noise moments rarely heard in the central Haus der Berliner Festspiele. At one point, a plangent wall of ensemble sound reached a fever pitch, and Rypdal upped the amplitude further, delivering a cathartic wallop we’d expect more from an avant-garde festival than Berlin’s fest. (Then again, the Berlin festival has always found subtle, sly opportunities to sneak avant-elements into the package.)

In the late-night “Seitenbühne” series, in a smaller black-box theater in the main Festspiele complex, several of the acts were led by young women musicians with fresh concepts in tow. The Swedish group Paavo, a sextet led by pianist Cecilia Persson and distinctive vocalist Sofia Jernberg, deftly mixed up intricate “chamber” scoring and improvisational freeplay elements. Little Red Suitcase, the creatively elastic duo of Spanish vocalist-violinist Elena Setién and Berlin-born pianist Johanna Borchert, wisely disseminated its various jazz, pop, and faux-folk content, making spaces and contrasts count. Borchert is an intriguing young pianist worth keeping tabs on: She can veer “inside” and “outside,” although she doesn’t seem to get a lot of stretching-out ops in this more conceptual project.

Outta’ New Jersey came trombonist Ray Anderson, a repeat visitor to this festival over the years (particularly now that fellow trombonist Nils Landgren is artistic director). Anderson showed up one night at the club Quasimodo in a great band led by fine Dutch alto saxophonist Paul van Kemenade and witty Dutchman Han Bennink on drums … well, a single snare, to be precise, played colorfully with brushes, sticks and the occasional shoe.

Sunday’s program was the finale, and the climax of the long weekend’s musical happenings. After concertgoers’ spirits were invigorated by the Kočani orkestar/Municipale Balcanica spectacular, Haarla and her sextet eased the audience down into the introspective yet also energetic folds of her Scandinavian eloquence. That night, Bates returned to Berlin in a very different mode than when he last appeared here, when his fiery, crazed and virtuosic StoRMChaser stole the show.

This year, the focus was on Bates’ own powers as a pianist, in the lean, exposed setting of a piano trio (with wonderful Danish musicians, Petter Eldh on bass and Peter Bruun on drums, sharply in synch with the leader’s sounds and artistic attitude). Bates was also on display as one of jazz’s intriguing rethinkers, presenting his deconstructionist homage to Bird, bringing “Billie’s Bounce,” “Scrapple From the Apple” and “Confirmation” to life in a fresh, inventive way.

In this blessed hour onstage, Bates enacted an ideal Euro-American symbiosis, filtering Bird songs through a sensibility at once irreverent and reverential, soaring wildly along the British-Danish-NYC axis. Here and elsewhere in Berlin, jazz went European and ultimately global, with freely criss-crossing energies not easily fixed to a time and place. Globalism is not entirely a dirty word, after all.

“It’s time to imagine a place where we can come together,” Danilo Pérez said from the hallowed stage of Washington, D.C.’s historic Sixth & I … END_OF_DOCUMENT_TOKEN_TO_BE_REPLACED

At the Zeiders American Dream Theater in Virginia Beach, Va., between April 8 and 10, the Vocal Jazz Summit convened in person for the first … END_OF_DOCUMENT_TOKEN_TO_BE_REPLACED

The Big Ears Festival returned to Knoxville in a big way in late March, drawing an estimated 30,000 music enthusiasts from across the U.S. and … END_OF_DOCUMENT_TOKEN_TO_BE_REPLACED

Let’s get this out of the way: The Savannah Music Festival is not a jazz festival. Held over the course of 17 days in late … END_OF_DOCUMENT_TOKEN_TO_BE_REPLACED