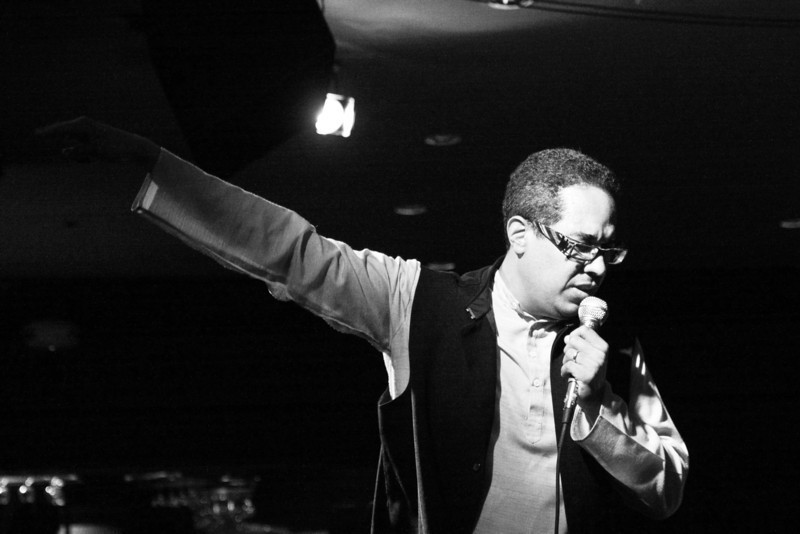 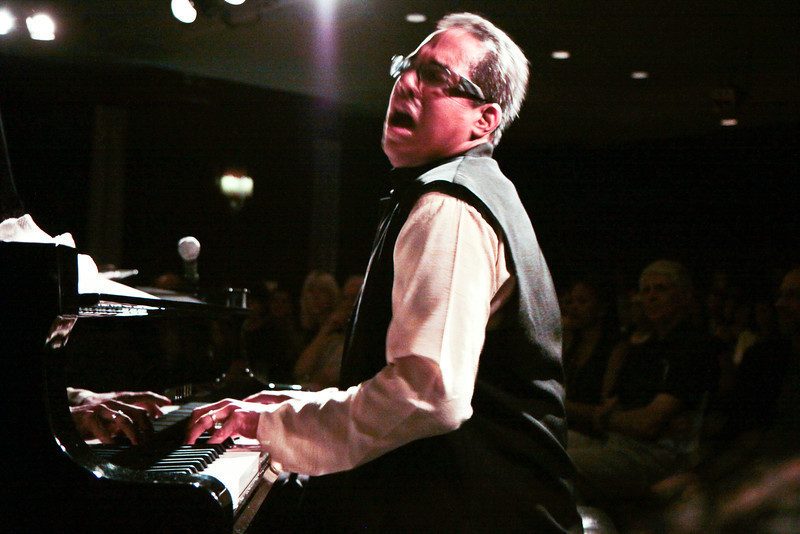 The festival had actually kicked off officially that Tuesday, with Berklee professor and BeanTown artistic director Terri Lyne Carrington hosting a free meet-and-greet concert at the college’s 939 Club. Drummer Carrington led a group including trumpeter Ingrid Jensen, saxophonist Tia Fuller, pianist Helen Sung and bassist Tamir Shmerling through material from her new album, The Mosaic Project, a tune-up for two nights of album-promoting performances she was booked for the next week at New York’s Jazz Standard.

But BeanTown is primarily a weekend festival, and the weekend got underway at the Berklee Performance Center on Friday evening with the all-star collaborative quartet James Farm: Joshua Redman, tenor sax; Aaron Parks, piano; Matt Penman, bass; Eric Harland, drums. Counting the audience-demanded encore, the set managed to accommodate stretched-out versions of nine of the 10 tunes on the band’s namesake debut album. (The exception was Redman’s “Star Crossed.”)

James Farm, despite the band’s relative newness, already has its detractors, who allege its music to be overly song- and groove-oriented in a bid for festival friendliness. Not surprisingly, a couple of critics admitted to leaving the BeanTown concert early and unimpressed. But theirs was a minority opinion. The music may have been more easily approachable, even pop-oriented, than the band members’ work elsewhere. But the musicians were obviously both pushing and full-on enjoying themselves. The drill usually involved opening with an arresting theme, with Redman following close behind with a solo that he would build slowly toward a rollicking climax that concluded with him exiting the stage, still blowing his horn, to thunderous applause. Parks would calm things down with a solo well-wrought and soulful, and Penman and Harland would keep the rhythm dancing energetically beneath everything throughout. An exception to that general pattern was Parks’ lovely waltz-time ballad “Bijou,” whose free-floating bluesy vibe called to mind Keith Jarrett’s stellar 1970s quartet with Dewey Redman (Joshua’s father) on tenor. Another was Harland’s “I-10,” which he introduced with a bravura drum solo. None of what got played would be mistaken for straight-ahead jazz, but the level of musicianship and improvisation was high and there were no serious grounds for grousing.

The straight-ahead stuff came on Saturday afternoon, albeit confined mostly to one of the three outdoor stages along the festival’s several-block stretch of Columbus Avenue. At one end of the event, just around the corner from the venerable jazz club Wally’s Café, was the Berklee Stage, where the music generally had links to the college and wasn’t always exactly jazz. Bona fide jazz alto-sax up-and-comer (and Berklee undergrad) Grace Kelly, for instance, sat in with Berklee prof Bill Banfield’s group the Jazz Urbane for a set dominated by seriously funky R&B grooves. Dave Samuels and the Caribbean Jazz Project and the Pablo Ablanedo Octet were Berklee Stage acts whose music came closer to fitting more traditional definitions of jazz, but this stage drew a respectably sized, appreciative crowd through the day nonetheless.

The Natixis Global Asset Management Stage generally stretched the definition past its breaking point, but generally drew the largest crowds, in part owing to the children’s activities close by. The acts here-among them Bernie Worrell and SociaLybrium, the Berklee P-Funk Ensemble and Oleta Adams-also tended to be louder than anything else at the festival, which sometimes proved problematic given their proximity to the Subaru of New England Stage, where the actual jazz was concentrated. Pity especially the duo of cellist Eugene Friesen and pianist Tim Ray, whose refined chamber-jazz project had to contend with both Worrell’s group and, more egregiously, Marcus Santos & Bloco AfroBrazil, who marched their drums within a couple-hundred feet of the Subaru stage and then planted themselves there for most of a Friesen-Ray arrangement. It’s a safe bet said arrangement hadn’t meant to include a marching-drum ensemble.

Still, there was strong, recognizable jazz to be heard at that third stage. The Berklee Global Jazz Institute was up first, followed by the Louis Hayes Cannonball Legacy Band. Veteran drummer Hayes led a quartet featuring saxophonist Vincent Herring through material from Cannon’s canon that included brother Nat Adderley’s well-known “Work Song.” And the afternoon concluded here later on with a well-attended set of hard-driving straight-ahead jazz from the Neal Smith Quintet, whose stellar lineup included Andrew Beals on alto sax, Steve Nelson on vibraphone, Eric Reed on piano and David Williams on bass. The discovery of the afternoon, though, was the young Montreal-based trio of Cuban pianist Rafael Zaldívar. The trio, with Rémi-Jean LeBlanc on bass and Philippe Melanson on drums, spent the bulk of its set playing free-leaning interpretations of familiar material, among it “Monk’s Mood” and a reconstituted “What Is This Thing Called Love?” that Zaldívar announced as “What Is Against Our Love?” Zaldívar, who has an album in the works featuring Greg Osby on three tracks, concluded the set unaccompanied with a riveting improvisation on part one of the Ernesto Lecuona classic “La Comparsa.”

The Zaldívar trio also watched that night’s festival headliner, Danilo Pérez, from the bar at Scullers Jazz Club. Pérez was there leading a superb trio that included its regular drummer Adam Cruz and had John Patitucci filling in for Ben Street on bass. Pérez and Patitucci are no strangers, having played together in Wayne Shorter’s quartet for years. But the new blood seemed to energize the trio for the night. Pérez emphasized new material early in the set, including a piece he’d been working on earlier that day and named for his young daughter “Danila” and her quick changes in mood. The trio also took a spin through Monk’s “Ask Me Now.” Pérez’s trio has always been much influenced by his work with Shorter-the music full of freedom and its incumbent risks, without being off-putting to ordinary listeners. Pérez, in fact, makes a point of engaging his audience, via guest artists, sing-alongs and what he chooses to talk about from the stage. This night he was focused on getting Washington to work better, bringing out flutist Matt Marvuglio to join the trio on a black plastic flute constructed from recyclable materials-Jorge Pérez-Albela would join them on cajón later in the set-and suggesting that politicians ought to be able to achieve such collaboration if musicians can.

The festival concluded the next night with the New Gary Burton Quartet at the Berklee Performance Center. Burton retired a few years ago from Berklee after a long career there as an educator and administrator, and he retained a professorial air when pausing to announce the titles of tunes. But he could also be funny, such as when he expressed pity for guitarist Julian Lage’s students, who were obliged to wrestle with “Etude,” a Lage composition that Burton himself said he found difficult to get through error-free. His four-mallet vibraphone work, though, was as dazzlingly vibrant and precise as ever. Bassist Scott Colley and drummer Antonio Sánchez have worked together quite a bit before-they’d been through Scullers a few months prior in a group led by pianist Kenny Werner, for instance-and it showed in their exceptional rapport. Lage, a veteran Burton sideman and leader still in his early 20s, had no trouble keeping pace with his phenomenal elders; his extended solo introduction to “My Funny Valentine” was arguably the most memorable of the set’s many highlights. The quartet added covers of “Afro-Blue,” “I Hear a Rhapsody” and Monk’s “Light Blue” to material drawn primarily from their new album, Common Ground, ending the concert-and the festival-with an encore of Sánchez’s bluesy “Did You Get It?”

“It’s time to imagine a place where we can come together,” Danilo Pérez said from the hallowed stage of Washington, D.C.’s historic Sixth & I … END_OF_DOCUMENT_TOKEN_TO_BE_REPLACED

At the Zeiders American Dream Theater in Virginia Beach, Va., between April 8 and 10, the Vocal Jazz Summit convened in person for the first … END_OF_DOCUMENT_TOKEN_TO_BE_REPLACED

The Big Ears Festival returned to Knoxville in a big way in late March, drawing an estimated 30,000 music enthusiasts from across the U.S. and … END_OF_DOCUMENT_TOKEN_TO_BE_REPLACED

Let’s get this out of the way: The Savannah Music Festival is not a jazz festival. Held over the course of 17 days in late … END_OF_DOCUMENT_TOKEN_TO_BE_REPLACED