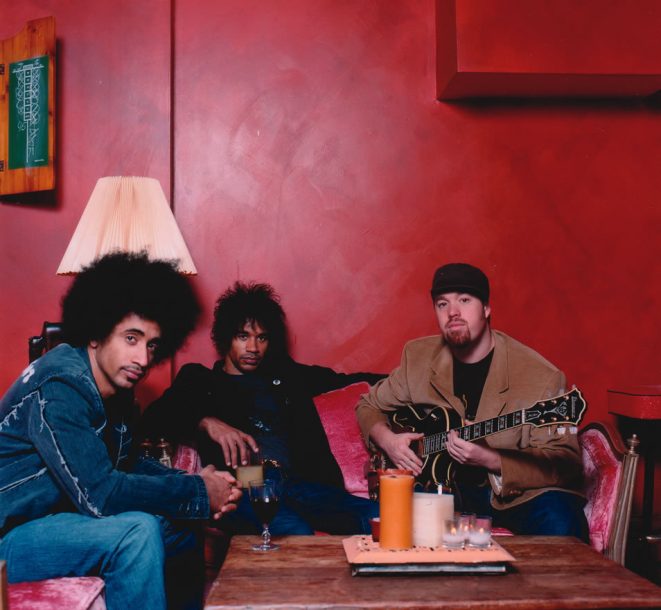 Anyone who woke up at the fourth annual Bear Creek Music Festival could’ve been excused for thinking that they were in the middle of a dream about Woodstock.

Tie-dye, hula hoops and frisbees were everywhere, even as the evening temperatures dipped well into the 30s from November 10-14 at the Spirit of the Suwannee Music Park in Live Oak, Florida. With its six stages (three outdoors; three indoors), the beautiful northern Florida facility played host to a five-day musical time warp.

The 600-acre campground presents music throughout the year, including the popular, rootsy events Springfest and Magnolia Fest, which was held just two weeks before. But Bear Creek featured mostly funk and jam bands, with ample horns and percussion and even traces of jazz — which were consistently identifiable by minimal accompanying crowds.

Wednesday and Thursday proved to be appetizers for the weekend, as a dozen acts played indoors. Audiences enjoyed the creative jamming of South Florida band The Heavy Pets in the SOS Music Hall on Wednesday, just after the electronic, Mississippi-based Zoogma played across the room on the Full Sail Stage. On Thursday, percussive Asheville act Toubab Krewe and New Orleans’ own authentic Rebirth Brass Band played in the large Purple Hat Tent.

Friday opened the main course on the fan-favored outdoor stages, and one of the most populated was consistently at the Big IV Ampitheater. Trombonist Sam Williams (formerly with the Dirty Dozen Brass Band) led the New Orleans-based crowd favorites Big Sam’s Funky Nation there, while Central Florida group Diocious brought the funk to a smaller but spirited throng at the Campground Stage.

Meanwhile, at the Purple Hat Tent, ever-inventive quartet Garaj Mahal was putting on a clinic in Frank Zappa-style odd-timed rhythms. New drummer Sean Rickman had been introduced through the band’s 2010 release #More Mr. Nice Guy#, where his additional vocals seemed to signal an attempted sell-out by the instrumental band. Yet the live renditions of vocal tracks like “Today” and “What My Friends Say” included much more fire and improvisation than the recorded versions. The drummer also soloed creatively over vamps by all-world bassist Kai Eckhardt, guitarist Fareed Haque and keyboardist Eric Levy.

Garaj Mahal showed new-found chemistry, especially between Haque and Levy. The guitarist’s use of MIDI technology added to his keyboard-like phrasing during several creative solos, and Levy echoed Herbie Hancock and John Medeski while switching between synthesizer, Fender Rhodes and Hammond organ.

“This one’s in 5/4 time,” said Eckhardt to introduce “Semos,” before asking Haque, “Why don’t you play it in five and I’ll play it in four?” Which they proceeded to do, adding time signatures of 6/8 and 7/8 by the time they concluded with a Mahavishnu Orchestra-worthy reading of “Jamie’s Jam” (Eckhardt has, after all, recorded with guitarist/guru John McLaughlin).

By that time, the once three-quarter-capacity tent had been reduced to half-full. Most of the teenagers and 20-somethings gave up dancing and twirling hula hoops to such intricate music and went to the neighboring outdoor Uncle Charlie’s Porch Stage. That’s where Boston-based octet John Brown’s Body was offering mid-tempo reggae, the new audio acid for the youthful masses. And it was telling that a group with twice as many members as Garaj Mahal attracted a much larger audience while making music that wasn’t half as interesting.

Elsewhere, on the Campground Stage, trippy acts like Jacksonville’s Greenhouse Lounge and South Carolina quartet The Malah induced hordes of young women to twirl and dance wildly as accompanying young men rocked in place. On the Full Sail Stage, California octet Orgone did likewise by veering near disco (Bear Creek does, in fact, describe itself as a “dance festival”). Athens band Perpetual Groove’s Phish-like sound also drew hundreds of dancers to the Big IV Ampitheater.

In the Purple Hat Tent, saxophonist Sam Kininger, a sometime member of the funky organ trio Soulive, led one of the early evening’s best funk acts (thanks in part to Soulive guitarist Eric Krasno’s fretwork).

One of the surprises wasn’t particularly pleasant to all. Soulive was scheduled to play at 11:20 p.m. in the Purple Hat Tent, yet popular Chicago jam band Umphrey’s McGee came on in their place with no announcement. Not that anyone under 30 years old noticed — the festival seemed, after all, more social than music event — but those expecting organ trio funk got rote jamming in its place. Soulive went on at midnight at the Big IV Ampitheater in place of Umphrey’s McGee after an bitter opening statement by Krasno.

“They say ‘It’s all good’ in show business,” the disgruntled guitarist said, “but it’s not always all good.” His trio with keyboardist Neal Evans and his brother, drummer Alan Evans, then literally tried to warm up with a few funky fan favorites before playing material from their latest release, the Beatles tribute CD #Rubber Soulive#.

Krasno’s volcanic solo highlighted “Come Together,” and the Evans brothers breathed funk into “Something” and “I Want You (She’s So Heavy).” All of which led to the SOS Music Hall wee-hours funk of Bernie Worrell & Socialybrium, led by the veteran keyboardist from both Parliament/Funkadelic and the Talking Heads, who played from 1-2:30 a.m. but seemed like he could’ve played all night.

The Big IV Ampitheater fired up at noon on Saturday with the horn-heavy Brooklyn octet Rubblebucket, who kept the stage warm enough for fiery New Orleans bassist George Porter & the Runnin’ Pardners. The Funky Meters’ bassist brought out saxophonist Ellis and trombonist Wesley for the second-line feels of “Iko Iko” and “Hey Pocky Way,” and guitarist Brint Anderson’s slide work echoed the late Duane Allman on a cover of Robert Palmer’s “Sneakin’ Sally Through the Alley.”

Inside the Purple Hat Tent, the Dead Kenny G’s were taking no prisoners. Consisting of Skerik on sax and keyboards, drummer/percussionist Mike Dillon and bassist/baritone saxophonist Brad Houser, the trio wore Kenny G-style ringlet curl wigs and epitomized the promise Jaco Pastorius made through the title of his composition “Punk Jazz.” The wigs made the trio of fusion veterans look 10 years younger, but it was the attitude that made its members sound like the Dead Kennedys as a jazz band.

“Jazz!” yelled Dillon. “If you’re 18 to 28, you hate it!” As the band played a swing feel, a third of the crowd left as if on cue, even while the drummer recited a variety of Beastie Boys lyrics. Yet the slamming sing-along “Black Death” proved to be a crowd favorite, and Derek Trucks Band drummer Yonrico Scott sat in as the tempos shifted between 6/8 and 11/8.

“Here’s one for all you Tea Partiers out there,” Dillon said to introduce “Sarah Palin Death Panels.” He then played vibraphone while Scott played drums, Skerik keyboards and Houser a mounted baritone sax on a composition that resembled a John Cage experiment between John Coltrane and Led Zeppelin. Love them or hate them — and there was little room in-between — the Dead Kenny G’s deserved high marks for the fact that they were impossible to ignore.

Skerik and Dillon both shed their wigs in time to join guitarist Will Bernard and his self-titled band on Uncle Charlie’s Porch Stage an hour later. As a member of New Orleans drummer Stanton Moore’s trio, Bernard knows how to create a deep funk pocket. His inside-out grooves (aided by the sax section of Skerik and Ellis) drew only a moderate crowd — at the same time that Athens quintet Dubconscious filled the Purple Hat Tent with its repetitive trance music.

Saxophonist Maceo Parker’s self-titled band featured yet another former James Brown horn great at the Big IV Ampitheater, and his stellar funk set led to after-dark jams there by moe and Ivan Neville’s Dumpstajam (who played until after 2 a.m.).

Sunday was the dessert portion of the fest, as the Brian Stoltz Band (led by the Funky Meters guitarist) brought the Big Easy to an afternoon crowd at Uncle Charlie’s Porch Stage. And New York City collective Lettuce, featuring Kininger, Krasno and Neal Evans, closed the Big IV Ampitheater with the historic additional horn section of Parker, Ellis and Wesley.

“It’s time to imagine a place where we can come together,” Danilo Pérez said from the hallowed stage of Washington, D.C.’s historic Sixth & I … END_OF_DOCUMENT_TOKEN_TO_BE_REPLACED

At the Zeiders American Dream Theater in Virginia Beach, Va., between April 8 and 10, the Vocal Jazz Summit convened in person for the first … END_OF_DOCUMENT_TOKEN_TO_BE_REPLACED

The Big Ears Festival returned to Knoxville in a big way in late March, drawing an estimated 30,000 music enthusiasts from across the U.S. and … END_OF_DOCUMENT_TOKEN_TO_BE_REPLACED

Let’s get this out of the way: The Savannah Music Festival is not a jazz festival. Held over the course of 17 days in late … END_OF_DOCUMENT_TOKEN_TO_BE_REPLACED