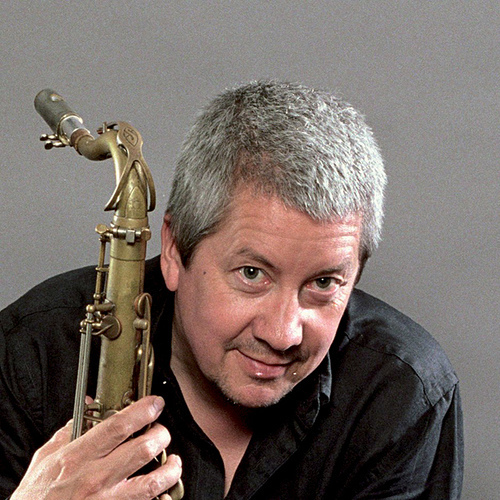 British sax maestro Andy Sheppard kicked off the UK’s world-class Cheltenham Jazz Festival weekend with the first airing of his new outfit, Trio Libero. This special collaboration featuring drummer Sebastian Rochford and French bassist Michel Benita was a triumphant premiere, setting the bar high for the festival’s ensuing acts. Beneath the soaring marble pillars and stately private boxes of the Regency-era town hall, backed by a huge multicoloured swirling projection of psychedelic proportions, the visionary sax player delivered what was arguably the best performance of the entire festival.

A good-humoured rapport between the players was palpable from the outset, despite being a relatively new venture. Sheppard’s whispering sax ascents and Benita’s fabulously rubbery tone were underpinned by the extraordinary percussion of Sebastian Rochford, the young, pokerfaced prodigy of Polar Bear fame. The drummer, complete with a staggering afro, was in characteristically deadpan form but exhibited an exquisite touch on the cymbals, breaking out a seemingly limitless supply of imaginative rhythms and exotic beats.

Sheppard is one of the few British jazz musicians to have impacted majorly on the international jazz scene. He is a serial collaborator, having worked with three of modern jazz’s key composers-Carla Bley, George Russell and Gil Evans. The saxophonist hails from the culturally-rich hub of Bristol, UK, a city whose musical heritage is famously built upon reggae, dubstep, jazz, Afrobeat and trip-hop. Sheppard draws on a whole range of styles, making compelling use of African, Indian and South American rhythms, and is perhaps most distinctive for his evocative melodic touch.

The concert began in conversational mode with Trio Libero’s own composition, “Liberino.” Sheppard on tenor articulated the theme before passing over to Benita for the first in a series of highly dexterous, sophisticated bass solos. Whilst far from being a household name, the infectiously jovial French bassist proved the perfect low-frequency foil to Sheppard’s soaring sax solos. Next up was “Land of Nod,” during which Sheppard switched to soprano to play a charming, almost folkish, melody. The dialogue between Sheppard’s soprano and Benita’s bass was captivating, propelled forward by Rochford’s scintillatingly delicate hand-drumming. The tune’s spry melody contrasted strongly against the cosmic soundscape of the next tune, “Space Walk”. This twenty minute long astral voyage saw Benita successfully looping an arco phrase on his bass, interspersed with a solo pizzicato line. Sheppard indulged in some live looping too, drenched with substantial delay and reverb, very much in the vein of Jan Garberek. It was a stunning, meditative interlude.

The boppish and sprightly “Rubbernecking” pulled the audience back from deep space, with a lithe tenor melody rippling above Rochford’s choppy, playful beats. Both the older bassist and saxophonist would at times look almost dotingly on their young drummer, granting him a scattering of drum solos during which he could unleash his latent, raw power. The show ended with the luscious ballad, “When We Live On The Stars”, furnished with several pithy bass solos from Benita. The trio, however, retuned with an encore in the form of the jaunty “Be Skippy Be”, described merely by the laconic Sheppard as “a happy tune”. A joyous tenor danced above skipping bass lines and drum grooves before the audience gave the trio a deservedly rapturous applause.

The group’s gentle grooves and insinuating, simple themes may have been easy on the ear but the level of musical sophistication was obvious. Solos refrained from showing off; the tumbling lines of demi-semis would come when needed and Sheppard seemed just as at ease blowing air barely audibly into his sax, producing sound only by snapping various keys down, as he did in one brilliantly understated ending. His lightness of touch and easy grace also emerged during his brief and wry introductions to the audience, where he proved himself to be engaging, albeit totally eccentric, interlocutor. But during the music, Sheppard would turn inwards and presided benignly over his group, often with his eyes closed; he rarely faced the audience, instead keeping his unassuming face locked in quiet contemplative focus in the direction his fellow band members.

Keep a lookout for the trio’s (as yet unnamed) debut album on the ECM label later this month. If their memorable and mesmeric performance in Cheltenham is anything to go by, the record promises to be an essential purchase for 2011.

[Editor’s Note: A review by Losh of a performance by Pharoah Sanders at the same festival is here.]

Among the many physical, spiritual, and institutional losses related to the still-ongoing pandemic is that of Los Angeles’ renowned Playboy Jazz Festival (PJF) at the … END_OF_DOCUMENT_TOKEN_TO_BE_REPLACED

It’s difficult to imagine what the stage and the audience would have looked like at Gaillard Center in Charleston, South Carolina, if Rhiannon Giddens’ new … END_OF_DOCUMENT_TOKEN_TO_BE_REPLACED

“It’s time to imagine a place where we can come together,” Danilo Pérez said from the hallowed stage of Washington, D.C.’s historic Sixth & I … END_OF_DOCUMENT_TOKEN_TO_BE_REPLACED

At the Zeiders American Dream Theater in Virginia Beach, Va., between April 8 and 10, the Vocal Jazz Summit convened in person for the first … END_OF_DOCUMENT_TOKEN_TO_BE_REPLACED