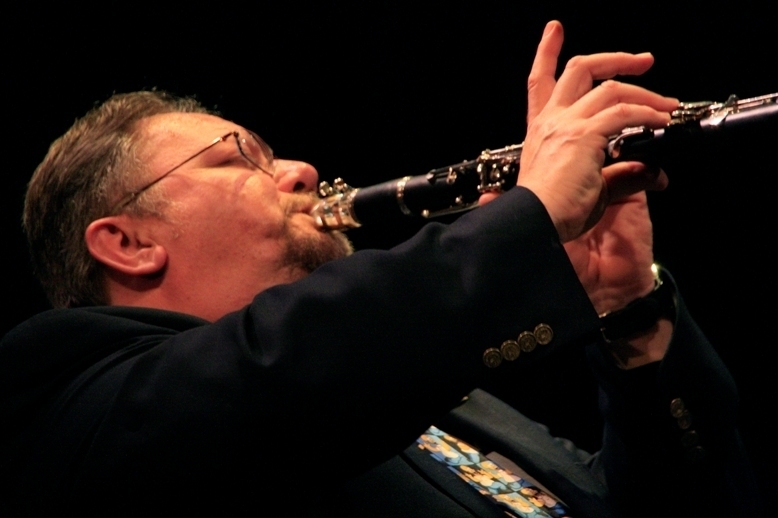 Clarinetist Allan Vaché may be best known for his 17-year stint (1975-1992) with the Jim Cullum Jazz Band, a San Antonio-based classic jazz/early jazz outfit that received heavy exposure on NPR’s “Riverwalk” weekly broadcast. That experience must seem like ancient history, since Vaché set out on his own as a solo artist 16 years ago. He’s based in Orlando FL, travels extensively for festivals and concerts, and has made a dozen recordings for the Arbors Jazz label.

The evening’s two sets included some updates on early Swing jazz, with Vaché also blending other styles. There was a bit of bop (“Bernie’s Tune”), obscure standards, chestnuts from the American Songbook, the Duke Ellington songbook, Nat King Cole (complete with Vaché’s vocal take on the clever lyrics to “Straighten Up and Fly Right”) and Antonio Carlos Jobim’s beautiful boss nova “Look to the Sky.” The evening wound down with a blistering take on “Caravan” featuring Metz – with Phillips adding a twist with his clavé comping.

Vaché’s clarinet playing is marvelous, particularly as he digs in and shares the passion he finds within a tune. In that regard, he seemed at times to be channeling the emotional style of his clarinet hero, the late Kenny Davern. It was most evident on “Bernie’s Tune,” “After You’ve Gone,” the Jobim bossa nova and “Do Nothin’ Till You Hear from Me.”

There likely will be a lot more such sibling humor on March 9 when the Vaché Brothers Swinging Quintet, featuring Allan on clarinet and Warren on cornet, performs up the road at the Sarasota Jazz Festival. It will feature the same rhythm section.

In its first full edition since the onset of the pandemic, and with a new director of programming, the Festival International de Jazz de Montréal … END_OF_DOCUMENT_TOKEN_TO_BE_REPLACED

Among the many physical, spiritual, and institutional losses related to the still-ongoing pandemic is that of Los Angeles’ renowned Playboy Jazz Festival (PJF) at the … END_OF_DOCUMENT_TOKEN_TO_BE_REPLACED

It’s difficult to imagine what the stage and the audience would have looked like at Gaillard Center in Charleston, South Carolina, if Rhiannon Giddens’ new … END_OF_DOCUMENT_TOKEN_TO_BE_REPLACED

“It’s time to imagine a place where we can come together,” Danilo Pérez said from the hallowed stage of Washington, D.C.’s historic Sixth & I … END_OF_DOCUMENT_TOKEN_TO_BE_REPLACED