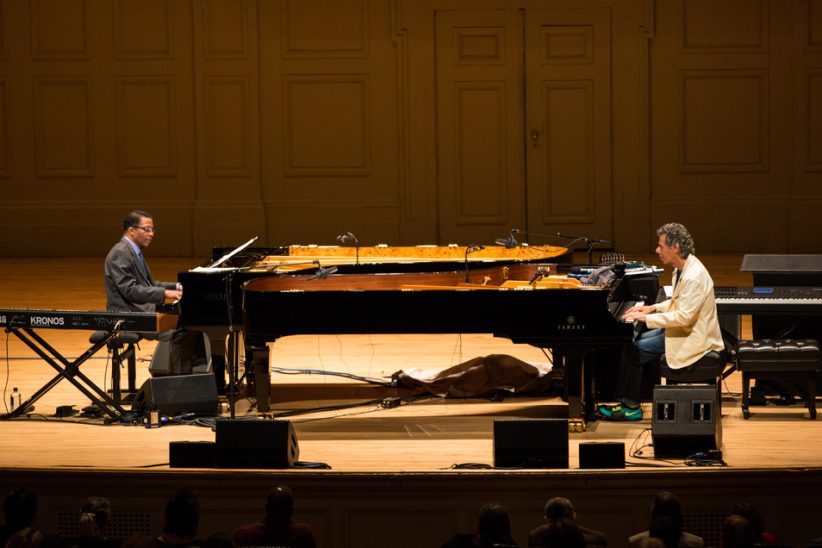 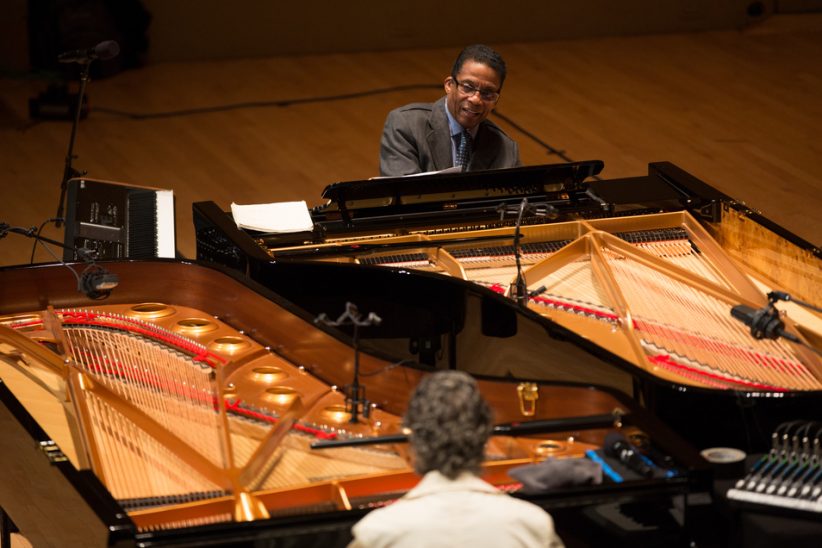 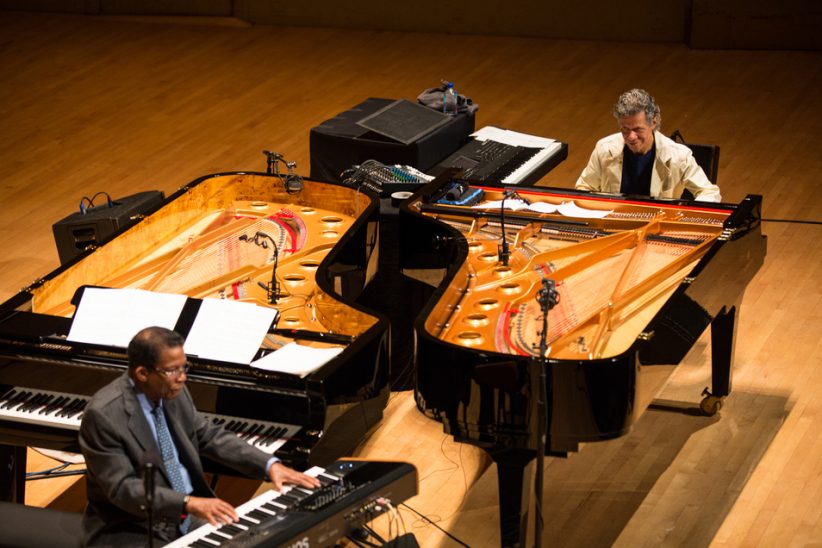 This is part two of a two-part column covering a weekend of high-profile jazz programming in Boston. For part one, click here.

Two living legends shared the stage for the Celebrity Series concert at Symphony Hall in Boston on April 12. Chick Corea and Herbie Hancock walked onstage together-Hancock in a gray sport coat, blue tie and gray slacks; Corea in casually sporty white jacket, blue t-shirt and jeans and fluorescent sneakers) and provided their own introductions. “I’d like to officially welcome back one of Boston’s own, Chick Corea,” began Hancock, which led to Corea asking whether there were any fellow 1959 graduates of Chelsea High School in the audience. Corea then reciprocated the introduction by saying, “I’m thrilled to have one of the great inspirations of my musical life, my buddy Herbie Hancock.”

“This was a pretty heavy jazz drumming town,” Corea informed his partner, “starting with Roy Haynes.” Tony Williams and a few other names followed, an audience member chipping in that of Alan Dawson. “Pretty good schools here, too,” added Hancock, who last spring had delivered the prestigious Norton Lectures at Harvard (his series’ title: “The Ethics of Jazz”). And then the two of them sat down at facing grand pianos and went to work.

Or maybe “play” is the better word. They professed to have no idea what they were going to do, and the first two pieces indeed seemed entirely improvised. Hancock led off the first one and Corea the second. The men fed off of each other brilliantly, shooting glances back and forth across the piano tops, Corea often mouthing his piano lines as he conjured them. There was obviously no coasting at this level of musicianship, and the two provoked blizzards of notes from each other while retaining their distinctive voices: rich, deep harmonies from Hancock; Corea’s sprightlier melodies on top (Corea also reached into his Yamaha grand-Hancock’s was a Fazioli-to pluck a rhythm on a piano string during the first improvisation).

Hancock and Corea were early adapters of electronic keyboards in the fusion era, and-though their previous tours together as a duo had been entirely acoustic-they each had one with them at Symphony Hall. “It’s helped us extend the insanity,” Hancock told the audience in introducing the night’s electronic number. “Add this to the 88 of the acoustic piano,” he added, nodding toward his Korg Kronos keyboard. Hancock did the heavy lifting on the synthesized piece, laying out funky patterns to which Corea mostly added acoustic frills. Another acoustic piece followed, after which Corea paused to direct the audience in singing “Happy Birthday” to Hancock, who turned 75 that day, though that milestone number wasn’t mentioned and Hancock doesn’t look it. (Corea will turn 74 in June and doesn’t look his age, either.)

Other recognizable tunes followed, starting with two Hancock classics. Corea played the opening chords of what turned out be a take on “Cantaloupe Island” that, like the rest of the night’s lush improvisations, will never be repeated. The two embraced and mugged for the audience afterward, and then Corea stood sipping water while Hancock essayed a pretty, abstract intro to what gradually emerged as “Maiden Voyage,” to which Corea contributed a series of subtle variations to the iconic melody (this modern jazz standard, Hancock’s recent memoir reminds us, had its genesis as a cologne-ad jingle).

The show at this point appeared to have ended after having barely begun, but there was an encore. As in New York earlier in the week, and as he has been known to do at concerts of his own, Corea led the audience in a sing-along. He divided it into five sections-two male, three female-and used their voices to create a chord to accompany portions of Joaquín Rodrigo’s “Concierto de Aranjuez,” which the pianists’ early employer Miles Davis had introduced to jazz on his landmark Sketches of Spain album the same year Corea graduated high school. That piece flowed directly into Corea’s own “Spain,” on which he coaxed the audience to echo his simple melodic variations-and teasingly tripped them up on with one tricky flurry of notes, to appreciative laughter.

The principals did some more hugging as they got their standing ovation, and they walked along the front of the stage shaking hands with fans before strolling back offstage together. But not before Hancock had announced, “Of all the audiences we’ve had, you take the cake.”

Take that, New York! Speaking of which, the Red Sox clobbered the Washington Nationals 9-4 at their Fenway Park home opener the next day, moving them 2 1/2 games ahead of the hated Yankees a mere seven games into the season. Yeah, spring has definitely arrived in Boston.

The 2022 Newport Jazz Festival’s three days of sunshine were bracketed, more or less, by a pair of all-star ensemble jams that included Christian McBride. … END_OF_DOCUMENT_TOKEN_TO_BE_REPLACED

In its first full edition since the onset of the pandemic, and with a new director of programming, the Festival International de Jazz de Montréal … END_OF_DOCUMENT_TOKEN_TO_BE_REPLACED

Among the many physical, spiritual, and institutional losses related to the still-ongoing pandemic is that of Los Angeles’ renowned Playboy Jazz Festival (PJF) at the … END_OF_DOCUMENT_TOKEN_TO_BE_REPLACED

It’s difficult to imagine what the stage and the audience would have looked like at Gaillard Center in Charleston, South Carolina, if Rhiannon Giddens’ new … END_OF_DOCUMENT_TOKEN_TO_BE_REPLACED