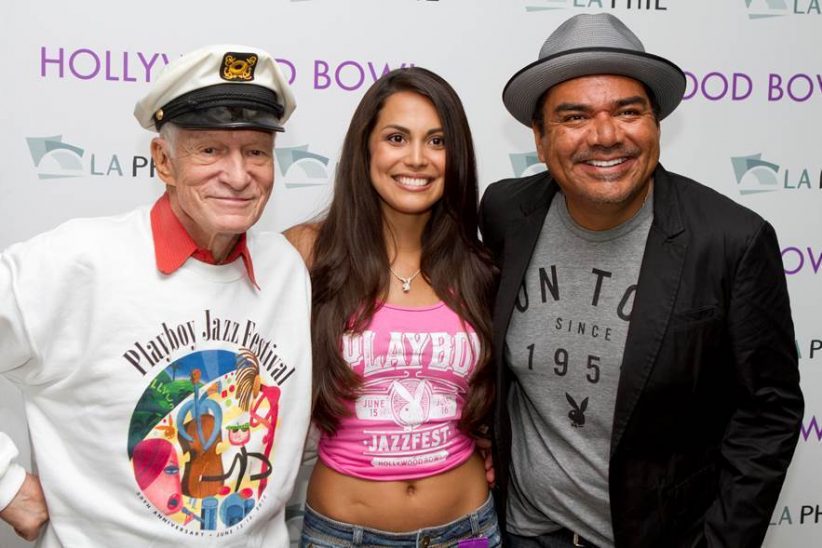 Hugh Hefner, 2013 Playmate of the Year Raquel Pomplun and Master of Ceremonies George Lopez at the 2013 Playboy Jazz Festival 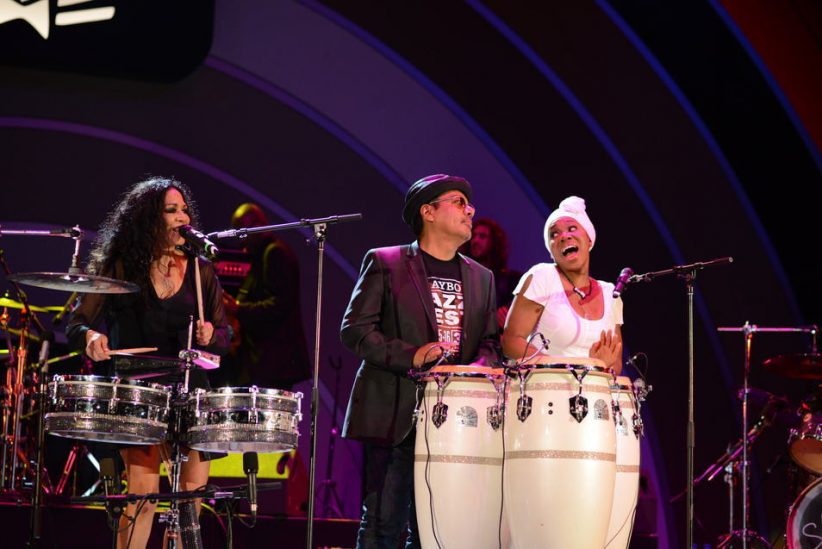 Sheila E., George Lopez and India.Arie (from left) at the 2013 Playboy Jazz Festival 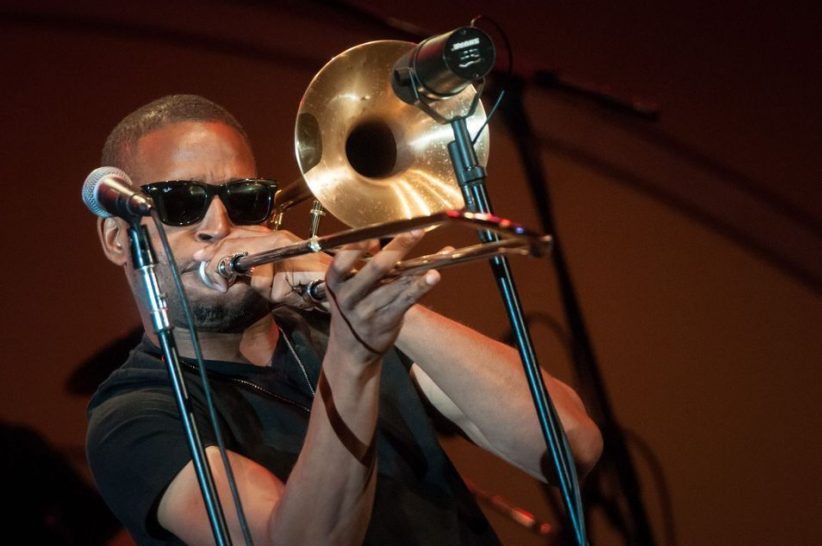 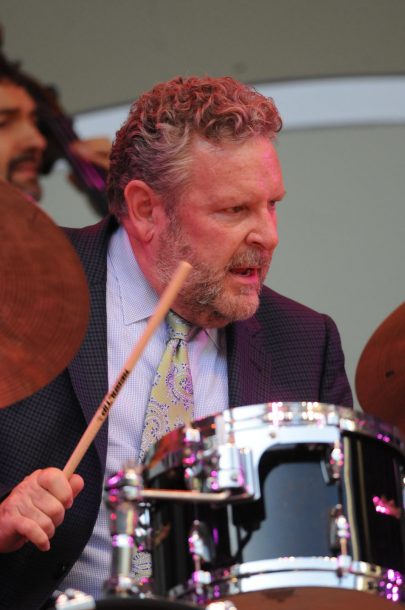 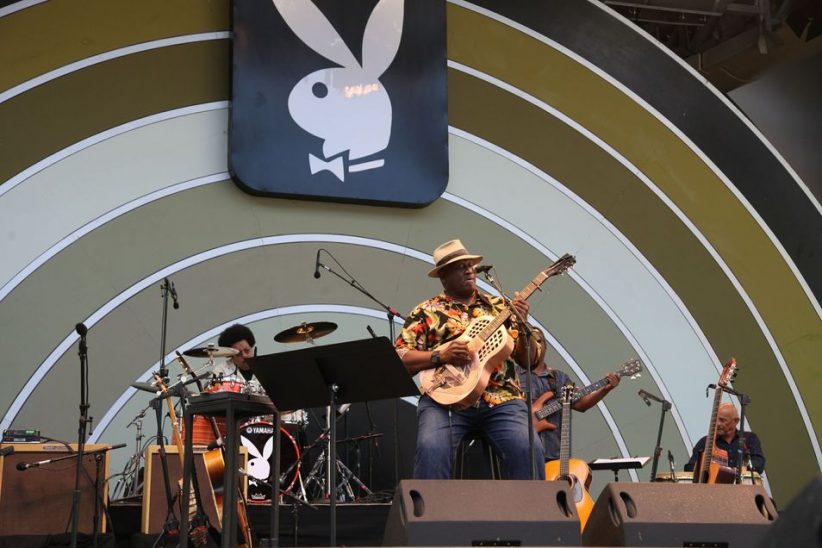 Los Angeles’ Playboy Jazz Festival celebrated 35 years at the Hollywood Bowl with a new emcee, comedian/entertainer George Lopez. For 31 years Bill Cosby was synonymous with the festival, even having his own ensemble, the Cos of Good Music. He tapped Lopez to preside over the festival’s customary mix of mainstream, Latin, big band, world, blues, funk and even pop.

Making a PJF debut was saxophonist/singer Grace Kelly, the youngest artist for 2013. Leading a quintet, she played with her mentor and friend, alto saxophone icon Phil Woods. Kelly gained favor with the wine-drinking/cheese-nibbling crowd by singing a samba version of “You Are My Sunshine,” playing the Woods-inspired original “Man With Hat,” and swinging coolly through “How High the Moon” and the bebop classic “Webb City.”

The emerging, critically acclaimed singer Gregory Porter was also new to the festival and captured the audience’s interest through appealing jazz, soul and gospel songs. His deep-toned, velvet intonations soared during a percolating “On My Way to Harlem” and the gospel-saturated new song “Liquid Spirit,” along with the signature expressive ballads “Our Love” and “Be Good (Lion’s Song).”

Notably, another Southern California jazz orchestra was on the roster, Gordon Goodwin’s Big Phat Band, with a special guest, guitarist Lee Ritenour. Goodwin, a pianist, arranger and composer, mostly showcased his own high-flying pieces and arrangements. Standouts included his Grammy-winning version of “Rhapsody in Blue,” with Ritenour, Jobim’s “Stone Flower,” and “LP for Les Paul,” along with the dramatic “Thunder,” sung by Judith Hill, formerly a contestant on TV’s The Voice.

Somewhat of a surprise to PJF partakers were Bob James and David Sanborn, who first recorded together on Double Vision in 1986. They worked with drummer Steve Gadd and bassist James Genus, and many assumed the segment would fall toward the smooth camp. Instead, the quartet alternated mainstream and smooth from their initial CD and the recently released Quartette Humaine, an homage to Brubeck. “Montezuma” was assaulting and challenging, while Marcus Miller’s “Maputo” was funky. Closing out the balanced set was the Brubeck-influenced “Follow Me,” which somewhat resembled “Blue Rondo à la Turk.”

Latin music and jazz were both represented this year. Conguero Poncho Sanchez ambitiously featured saxophonist James Carter with his Latin Jazz Band for a tribute to the John Coltrane album Olé Coltrane from 1962. In lieu of selections from the album, a Latin-styled “Giant Steps,” “The Feeling of Jazz” (composed by Ellington and Coltrane) and Herbie Hancock’s “Watermelon Man” were performed, bolstered by Carter and Sanchez’s stirring solos. Sheila E. closed out the festival and enlisted the USC Drum Corps for her intro before shifting to “A Love Bizarre,” a funk jam co-written with Prince. Her father, Pete Escovedo, also lent support with fiery timbale exchanges on Tito Puente’s classic “Oye Como Va.”

All the while, Lopez danced with the bandleader and onstage. After several other Prince-flavored tunes and a new one, “Mona Lisa,” E. wrapped up her set, but the crowd and Lopez demanded an encore. In response she brought India.Arie to help on percussion for “The Glamorous Life,” with her parents onstage dancing. On the opposite end of the festival’s timeline, the Pedrito Martinez Group, featuring keyboardist Ariance Trujillo, got things going with heady Cuban grooves. Their rendition of Michael Jackson’s “I’ll Be There,” with soulful singing and scorching keyboards, was a standout, along with the percussionist-leader’s vocal performance of “Que Palo.”

Trombone Shorty and Orleans Avenue preceded E. and made the strongest impact at the PJF. Trombone Shorty (Troy Andrews) delivered hard-hitting playing and soulful singing that spanned jazz, New Orleans brass band music, R&B and hip-hop. He was blazing on trombone and trumpet, wowing the audience with a long circular-breathing solo. He rocked the Bowl with a rendition of Ray Charles’ “I Got a Woman” that included choruses from George Clinton’s “Atomic Dog.” Closing things out was the New Orleans staple “Mardi Gras Mambo.” The reaction was so strong that PJF management delayed spinning the two-sided stage for E.’s group. For a closer, Andrews’ group all jammed on the drum kit as the band’s drummer flailed away. Afterwards, Lopez affectionately picked Andrews up to display approval.

For pop, keyboardist/singer/producer George Duke shelved his jazz credentials to perform with singer Jeffrey Osborne during his first PJF appearance. Their collaborative hits, such as the sweeping “On the Wings of Love” and the soulful “You Should Be Mine (The Woo Woo Song)” enthralled listeners. Additionally, Osborne sang LTD’s “Back in Love” and Louis Armstrong’s “What a Wonderful World.” Duke also injected his ballad “Sweet Baby” with the funk romps “Me and the Boys” and “Dukey Stick.” A cappella sensations Naturally 7 returned to PJF with a crowd-pleasing spectrum of genres and shined with Seals and Crofts’ “Summer Breeze” and Sting’s “Englishman in New York.” Furthermore, Herbie Hancock donned his Ax-Synth to play his tunes “Butterfly,” “Chameleon” and “Rock-It,” garnering one of the few standing ovations of the festival.

Also debuting at PJF was veteran bluesman Taj Mahal and the Real Thing Tuba Band, which nonchalantly skirted between blues and jazz. The easy-shuffling “Big Kneed Gal” abounded with brass power. The traditional blues number “You’re Gonna Need Somebody” and his classic “She Caught the Katy (And Left Me a Mule to Ride)” showcased Mahal’s raspy vocals, acoustic guitar and expert brass chorus.

The four-time Grammy-winning singer, guitarist and activist India.Arie, also new to PJF, was in a category by herself, representing acoustic modern soul. Songs such as “Video,” “Brown Skin” and the ballad “I Am Ready for Love,” which included her flute solo plus her mother singing along, were compelling. Rounding out the festival was the Robert Glasper Experiment playing selections from the keyboardist’s Black Radio album. Glasper’s quartet, featuring Casey Benjamin on saxophone and vocoder, produced textures akin to a meld of Radiohead and keyboardist Lonnie Liston Smith. Glasper coolly held his own, and his set was elevated by a guest spot from singer Dianne Reeves.

Even without Cosby, PJF lives on and its uniting of artists and genres seems likely to endure for another 35 years.

Among the many physical, spiritual, and institutional losses related to the still-ongoing pandemic is that of Los Angeles’ renowned Playboy Jazz Festival (PJF) at the … END_OF_DOCUMENT_TOKEN_TO_BE_REPLACED

It’s difficult to imagine what the stage and the audience would have looked like at Gaillard Center in Charleston, South Carolina, if Rhiannon Giddens’ new … END_OF_DOCUMENT_TOKEN_TO_BE_REPLACED

“It’s time to imagine a place where we can come together,” Danilo Pérez said from the hallowed stage of Washington, D.C.’s historic Sixth & I … END_OF_DOCUMENT_TOKEN_TO_BE_REPLACED

At the Zeiders American Dream Theater in Virginia Beach, Va., between April 8 and 10, the Vocal Jazz Summit convened in person for the first … END_OF_DOCUMENT_TOKEN_TO_BE_REPLACED