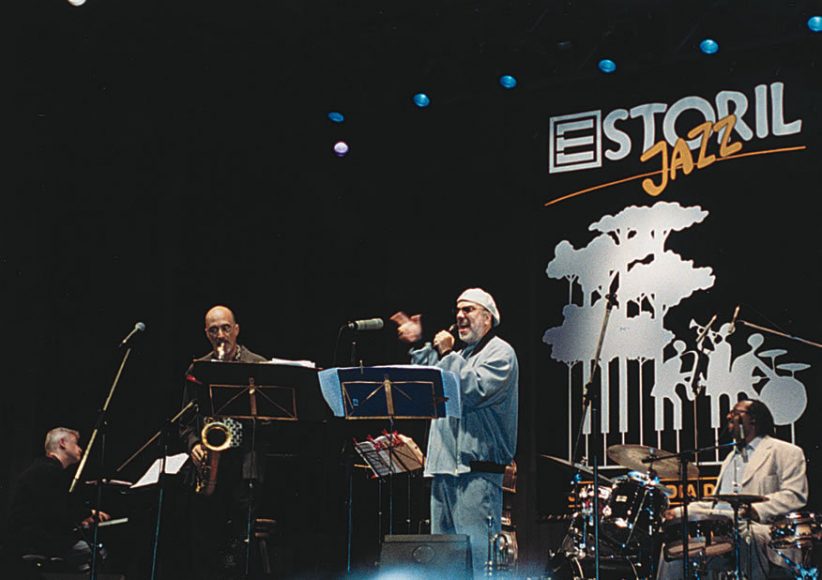 Michael and Randy Brecker at the 2001 Estoril Jazz Festival

The Estoril Jazz Festival closely reflects the personal tastes of its charismatic founder, Duarte Mendonça, whose lifelong passion for no-nonsense, straightahead jazz dates back to 1948 and is equaled only by his love of vintage racing cars. Mendonça has been bringing quality jazz to this idyllic seaside slice of Portugal since 1974 with relatively few concessions to the commercial side of things. And this year’s lineup was no exception to that hard and fast rule.

Unlike some of the higher profile European festivals that inundate listeners with an unending flow of music, forcing festival goers to hustle between multiple stages for several consecutive days, the Estoril Jazz Festival is a far more laid-back affair. Music is presented only on weekends, and only one band is showcased each night. That means that there is plenty of downtime for festival goers to luxuriate on the beaches of Estoril and Cascais, hop on a train to the culturally rich capital of Lisbon just 40 minutes away or otherwise hang out and consume massive quantities of grilled sardines while sampling the regional Portos, vinhos and muscatels before eventually getting around to checking out the bands. It’s hard to top for a relaxing getaway, but the pay-off is ultimately the music.

The first weekend of the 20th Estoril Jazz Festival featured performances by Chris Potter and Charles Lloyd fronting their respective bands. While Potter’s hip young aggregation may have been on the fringe of Mendonça’s personal radar, Lloyd was a much-welcomed return visitor to the festival. With Geri Allen on piano, Marc Johnson on bass and Billy Hart on drums, Lloyd and crew packed the intimate 700-seat outdoor Parque Palmela auditorium.

The second weekend featured an inspired set by the Frank Wess Quartet with trumpeter Terell Stafford and a special acoustic edition of The Brecker Brothers. The Hal Galper Quintet featuring tenor saxophonist Walt Weiskopf, trumpeter Jack Walrath, drummer Steve Ellington and bassist Jeff Johnson also participated in clinics and master classes during the week while performing separate concerts at the Parque Palmela auditorium and the Casino Estoril. Their savvy brand of post-hard bop revealed Galper to be at the top of his game both as a composer and improviser. His originals were consistently challenging, stimulating and swinging while he, Weiskopf and Walrath enlivened the material with crackling solos. Galper may make noises about retiring from the game, but a talent as profound as his should not be stifled.

Back in the late ’70s, Randy and Michael Brecker played in Hal Galper’s aggressively swinging, boppish quintet with drummer Bob Moses and bassist Wayne Dockery. They reprised that smoking vibe in their set at Estoril, which caught them in the middle of a rare acoustic tour of Europe. With Carl Allen on drums, Peter Washington on bass and Dave Kikoski on piano, the Brecker Brothers burned through original material that segued from urgent ride cymbal sizzle to slamming backbeats. Randy, who formerly played his trumpet through various effects devices in the electric incarnation of The Brecker Brothers, was hitting on his Booker Little/Clifford Brown roots in this swinging acoustic context. He summoned up hard-bop bravura on his Eddie Harris-styled soul-jazz number “Shanghigh” and on his Lee Morgan-ish groover “Freefall.” Switching gears, he took the mic and transformed himself into the swaggering, streetwise Randroid for a funky “Hangin’ in the City.” The Estoril crowd seemed thrilled to receive this rapping postcard from the streets of New York City, and Randy played the tour guide role to the hilt.

Throughout their crackling set, brother Michael demonstrated his awesome command of the tenor saxophone. The remarkable overblowing, the nonchalant double-timing, the daring intervallic leaps and radical note-bending are by now so organically integrated into his instantly recognizable signature that it’s what we’ve come to expect from him, though it still continues to amaze. Michael’s playing was particularly pyrotechnic on Randy’s hard bop anthem “Tokyo Freddie” and on his own “Dr. Slate.” For a change of pace, he got rhapsodic on the poignant Claudio Ventarini ballad “Nacente” from his recent Nearness of You: The Ballad Book.

A surprise of the Breckers’ set (at least to this Estoril crowd) was the fiery playing of pianist Kikoski, who combines blazing right-hand technique and classical discipline like a bebop Chopin. A longtime member of the Roy Haynes Quintet, Kikoski is one of the few pianists (Joey Calderazzo is another) who can actually follow a Michael Brecker solo and still light up the crowd. The Breckers encored with a real blast from the past, Randy’s chops-busting funk-fusion anthem from the early ’70s, “Some Skunk Funk.”

Former Basieite Frank Wess, still going strong at age 79, delighted the crowd with his lively brand of soulful, swinging blues and ballads. With a loose-tight rhythm section of Danny Mixon on piano, Larry Gray on bass and Brian Brice on drums, Wess formed a powerfully swinging frontline with the younger, fiery trumpeter Terell Stafford (replacing Wess’ longtime partner and fellow Basieite from the ’50s, Frank Foster, who had suffered a stroke earlier this year and has since been recuperating).

On their opener, Foster’s “All Such Stuff as That,” Wess dug deep on tenor, summoning up a kind of gusto that belies his age. On “Ménage à Blue,” a slow blues in 3/4 time, he blew fluently over the changes on tenor while Mixon comped exuberantly behind Stafford’s spirited plunger solo. Wess was also in rare form on Cedar Walton’s “Some Roots” and a rocking blues, “You Made a Good Move,” seemingly spurred on by Stafford’s energetic stage presence and aggressive attack. Bruno Martino’s “Estate,” set to a bossa-nova beat, was a gorgeous ballad vehicle for Wess’ underrated flute work. Frank showcased another side of his flute playing alongside Stafford’s muted trumpet work on Joe Newman’s “The Midgets,” an uptempo cooker that goes back to Wess’ Basie days.

Throughout their set, the ebullient pianist Mixon played a kind of musical guessing game by dropping in quotes from familiar tunes during his solos. On Cedar Walton’s “Some Roots” alone he dropped in snippets of “Blue Moon,” “Old Man River,” “On Green Dolphin Street.” On a lively version of Benny Golson’s “Stablemates” he nimbly worked in a passage from Bobby Timmon’s “Moanin’.” He even managed to work Archie Bunker’s theme, “Those Were the Days,” into the fabric of one solo. Another highlight of the set was the intimate duo between Mixon and bassist Gray, who bowed the melody with finesse and lyricism.

Wess’ classy straightahead set must’ve been closest to promoter Mendonça’s heart. But it was the Breckers who provided the most fireworks at this year’s Estoril Jazz Festival.

“It’s time to imagine a place where we can come together,” Danilo Pérez said from the hallowed stage of Washington, D.C.’s historic Sixth & I … END_OF_DOCUMENT_TOKEN_TO_BE_REPLACED

At the Zeiders American Dream Theater in Virginia Beach, Va., between April 8 and 10, the Vocal Jazz Summit convened in person for the first … END_OF_DOCUMENT_TOKEN_TO_BE_REPLACED

The Big Ears Festival returned to Knoxville in a big way in late March, drawing an estimated 30,000 music enthusiasts from across the U.S. and … END_OF_DOCUMENT_TOKEN_TO_BE_REPLACED

Let’s get this out of the way: The Savannah Music Festival is not a jazz festival. Held over the course of 17 days in late … END_OF_DOCUMENT_TOKEN_TO_BE_REPLACED