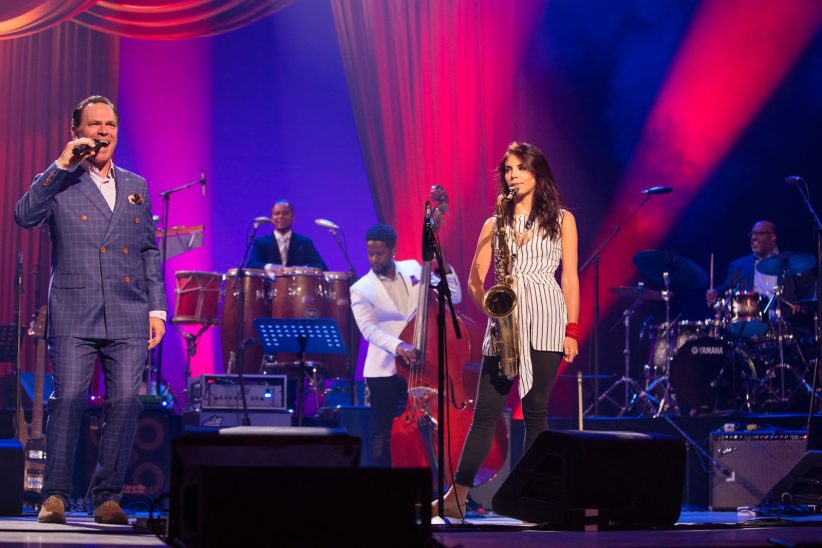 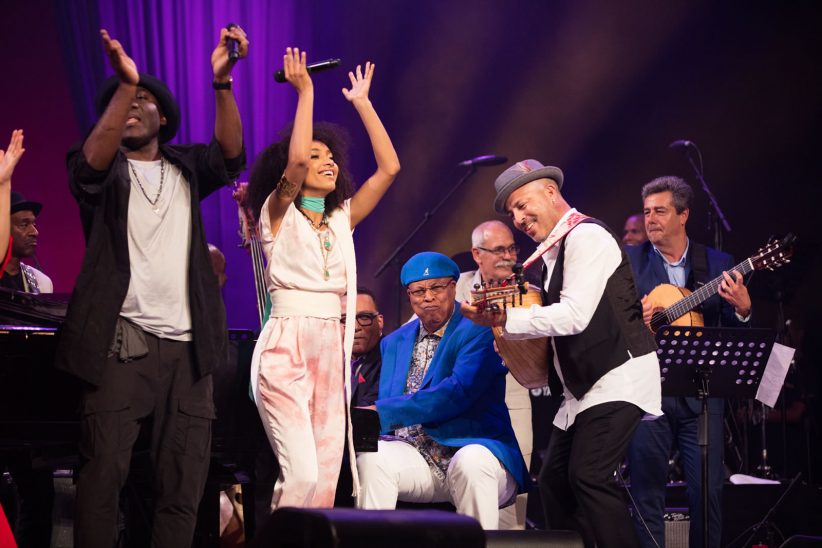 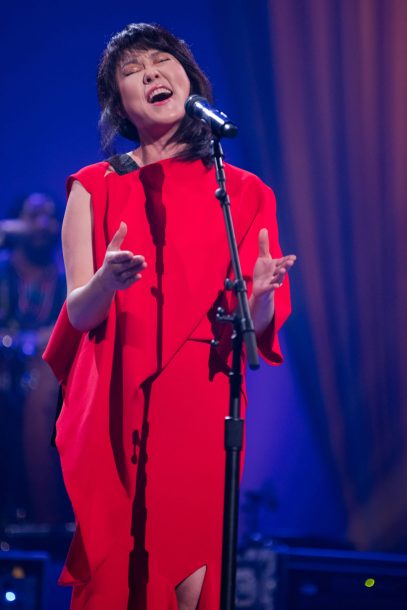 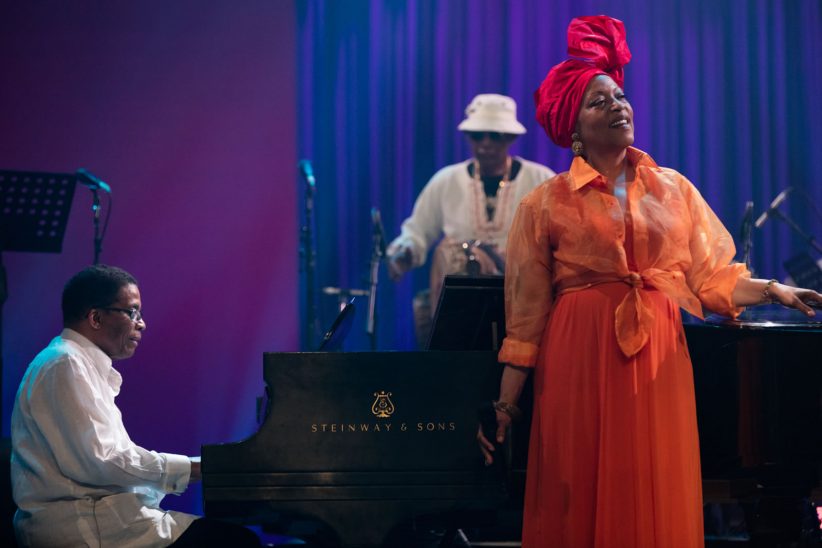 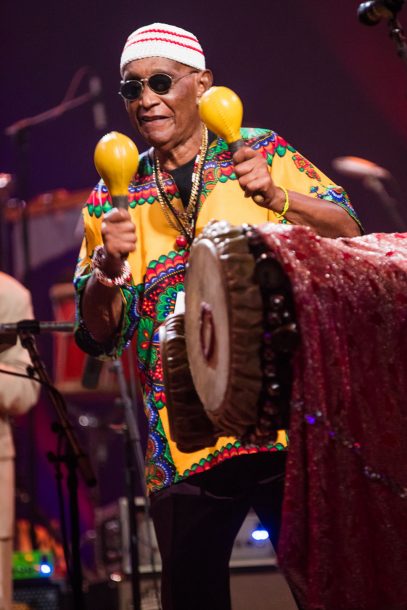 Oscar Valdés (photo by Steve Mundinger)
Despite taking place in Havana, Cuba, one of the most inspiring but politically complex nations on the planet, this year’s International Jazz Day Global Concert, … END_OF_DOCUMENT_TOKEN_TO_BE_REPLACED

Despite taking place in Havana, Cuba, one of the most inspiring but politically complex nations on the planet, this year’s International Jazz Day Global Concert, which streamed live from the Gran Teatro de la Habana Alicia Alonso on Sunday, didn’t dig into specifics regarding any of the world’s governments or regimes. The two-and-a-half-hour all-star concert, presented in English and Spanish and hosted by Will Smith, with show-stealing assistance from bassist-vocalist Esperanza Spalding, stayed on message, again and again: International Jazz Day promotes the music as a language, a facilitator for meaningful, joyful democratic interaction between disparate peoples.

Irina Bokova, the Director-General of UNESCO, which organizes the event alongside the Thelonious Monk Institute, spoke briefly and broadly but with spiritual pertinence. She reminded the house that jazz has been “the soundtrack for struggles all over the world,” and praised the 2017 host nation as “a country that understands the importance of music, with a society that grasps so intimately the power of culture to change lives.”

“[We celebrate jazz] because culture and human rights go hand in hand, and those who seek to divide, fragment or weaken humanity will always target culture and seek to control diversity,” she continued. “This is why we must stand together, speak out together, listen together [and play jazz] together—to highlight and share the power of culture, knowledge, ideas…” These are of course political sentiments, but they’re also concepts of inclusion that should be inarguable: people, expression, hope for change and peace. Notice how names were evoked but not named.

Cuba seized the opportunity to showcase its talent, which gave this sixth annual program a stronger, more memorable aesthetic; not surprisingly, the more Afro-Cuban the evening became, the more sparks flew. At its best, Afro-Cuban music is inherently devotional, conjuring a trancelike atmosphere and piling on the intensity toward a grand moment of catharsis; even within the restraints of a broadcast, this concert delivered several of those enthralling rumba-descended moments. Singer-percussionist (and Irakere co-founder) Oscar Valdés centered an explosive opening take of “Manteca,” underscored by a trumpet showdown between Germany’s Till Brönner, Japan’s Takuya Kuroda and Cuba’s Julio Padrón. Francisco “Pancho” Amat, with fantastic help from singer and oud player Dhafer Youssef and violinist William Roblejo, gave a clinic in tres technique during a rousing exhibition of changüí, a traditional Cuban style rooted in Guantánamo.

Spalding and Bobby Carcassés formed a delightfully rhythmic and charismatic vocal frontline on her “I Adore You.” (Equally mighty was the hookup between Mexican-born drummer Antonio Sanchez and Cuban percussionist Yaroldy Abreu.) An all-star Cuban large ensemble performed matchless, solo-heavy Afro-Cuban jazz, with flutist Orlando “Maraca” Valle and singer Sixto “El Indio” Llorente bringing the pot from strong simmer to boil through son spirit. The traditional IJD concert finale, a full-cast arrangement of John Lennon’s “Imagine,” picked up Afro-Cuban steam midway through and morphed into a crowd-fueled singalong of “Guantanamera.”

Korean singer Youn Sun Nah, a multilingual, tradition-spanning stylist who seems tailor-made for the IJD ethos, interpreted “Bésame Mucho” in a way that pointed up the totality of her abilities: the crystalline timbre and intonation of her instrument; her absolute precision in phrasing; a palpable sense of melancholy, bolstered here by the brilliant violinist Regina Carter. Cameroonian bassist and vocalist Richard Bona, another globally formed mega-talent who personifies the event’s message, sang the Cuban standard “Bilongo” in Duala, propelled by a band including pianist Robert Fonseca, percussionists Adel González and Abreu, and Barbarito Torres, the laúd player and Buena Vista Social Club alum. (The homegrown percussion sections were a not-so-secret weapon throughout the evening.)

Two of Cuba’s most widely renowned musicians, pianists Chucho Valdés and Gonzalo Rubalcaba, acknowledged Monk’s centennial through a “Blue Monk” that overflowed with barrelhouse feeling and soulful tweaks to the composer’s sly harmonic and melodic contours. Two-piano situations, and the conservatory-driven Cuban jazz-piano tradition in general, can easily become overstuffed. But this union was masterfully lyrical and empathetic, and gave more proof of jazz’s profound cross-cultural heritage. It held up IJD’s m.o., no teleprompter required.

It’s difficult to imagine what the stage and the audience would have looked like at Gaillard Center in Charleston, South Carolina, if Rhiannon Giddens’ new … END_OF_DOCUMENT_TOKEN_TO_BE_REPLACED

“It’s time to imagine a place where we can come together,” Danilo Pérez said from the hallowed stage of Washington, D.C.’s historic Sixth & I … END_OF_DOCUMENT_TOKEN_TO_BE_REPLACED

At the Zeiders American Dream Theater in Virginia Beach, Va., between April 8 and 10, the Vocal Jazz Summit convened in person for the first … END_OF_DOCUMENT_TOKEN_TO_BE_REPLACED

The Big Ears Festival returned to Knoxville in a big way in late March, drawing an estimated 30,000 music enthusiasts from across the U.S. and … END_OF_DOCUMENT_TOKEN_TO_BE_REPLACED