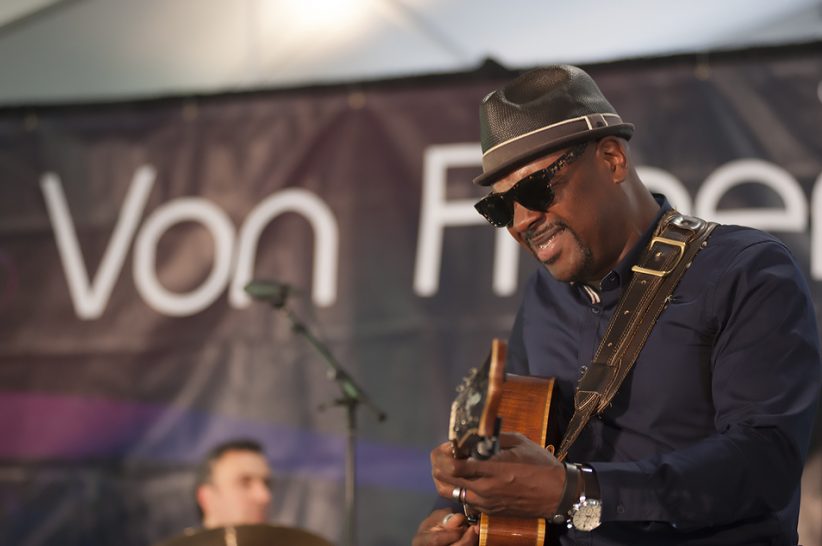 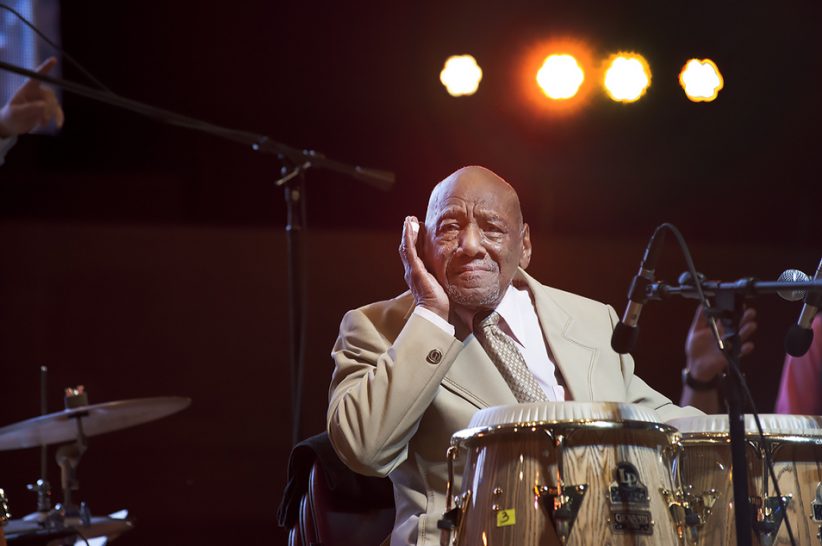 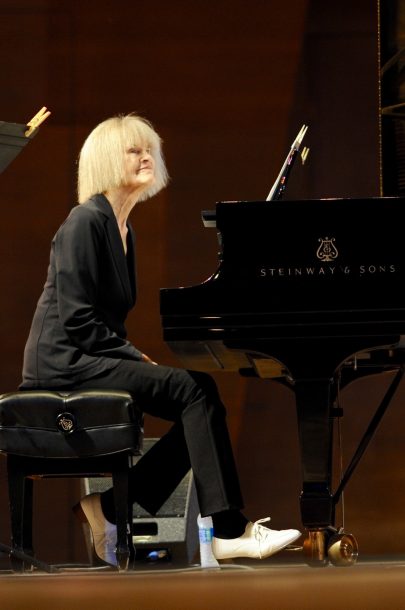 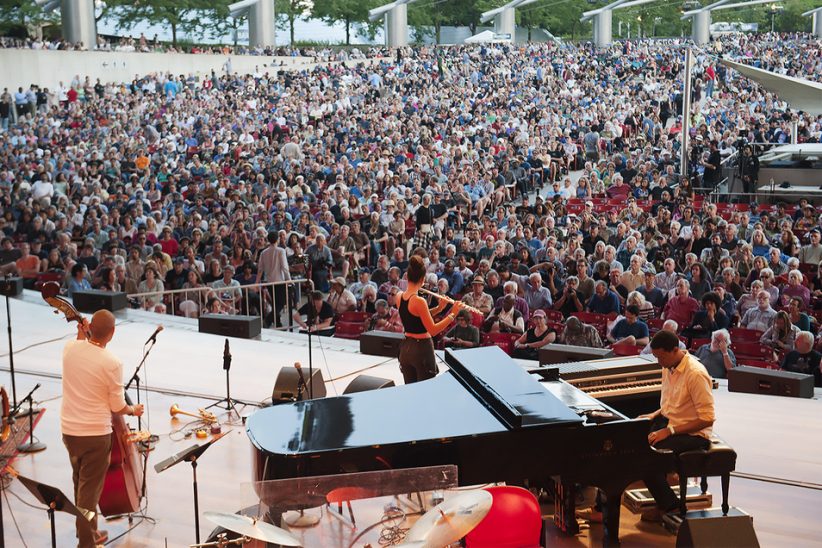 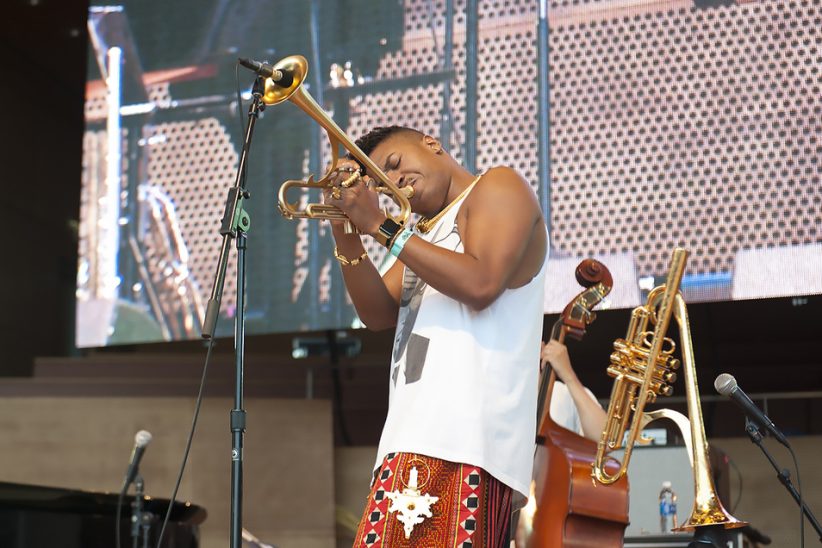 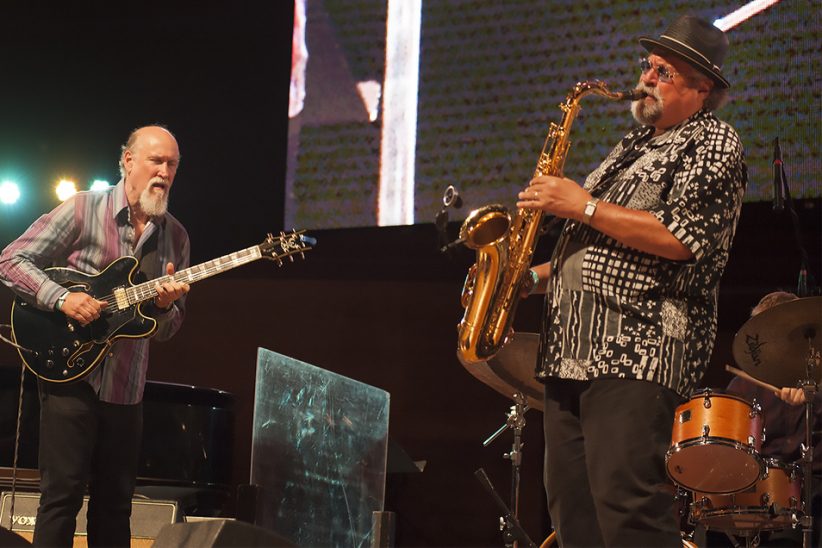 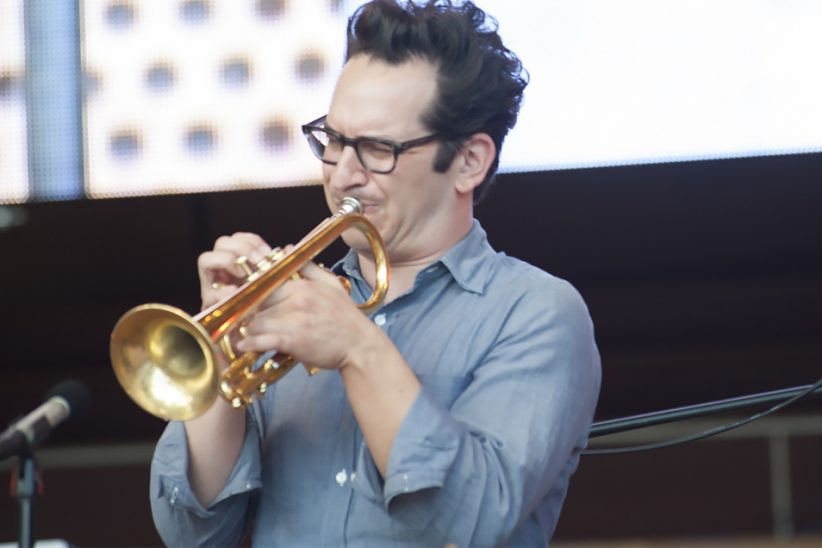 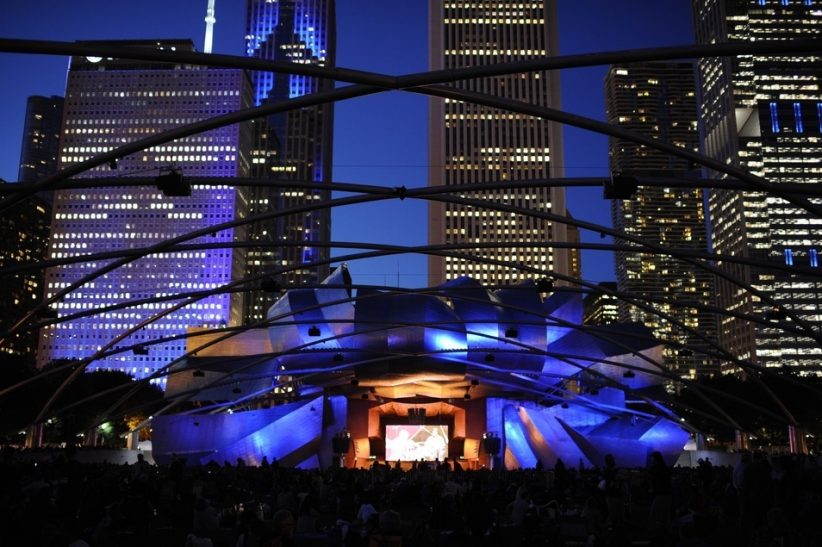 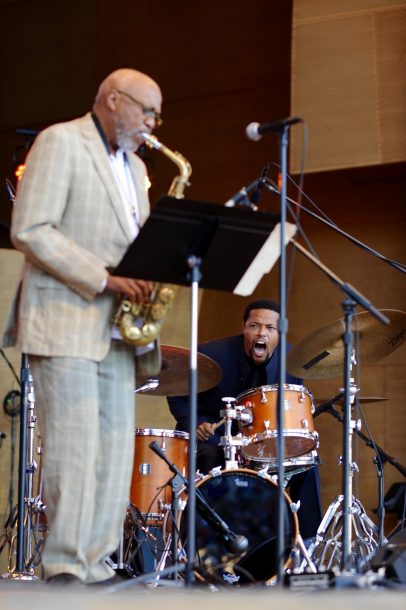 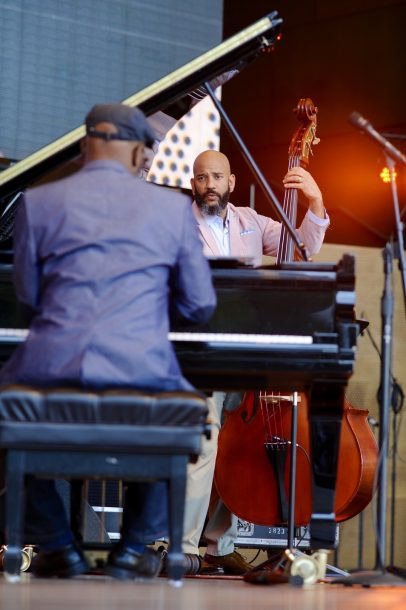 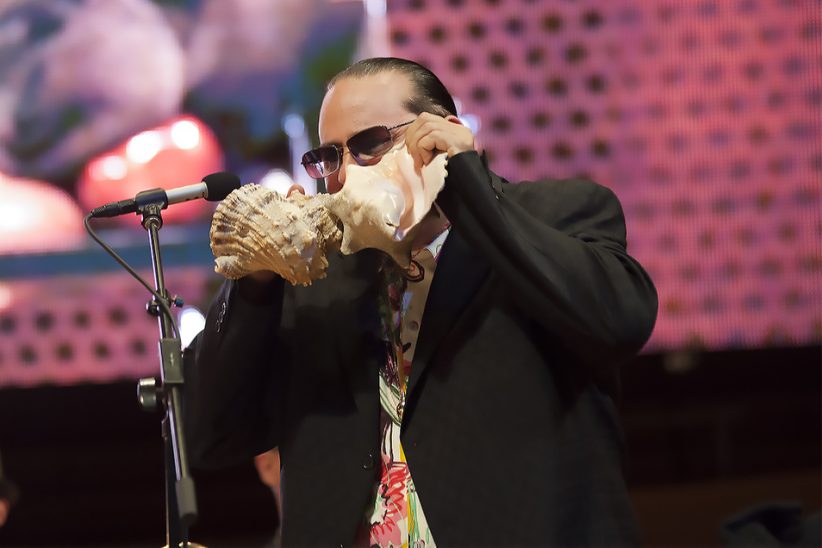 At any jazz festival with an international reputation, it’s a balancing act to maintain the global reach of prestige acts without compromising the local character of the host city. Not so at the 38th annual Chicago Jazz Festival, which took place over Labor Day Weekend, from Sept. 1-4, in Millennium Park. The festival confounds the tradition of center and periphery in the jazz world-a model that has artists developing their style in regional incubators before testing their mettle in New York-making a strong case that in today’s overcrowded market, the center cannot hold. And yet, perhaps it’s better that way.

Chicago’s architectural diversity-Louis Sullivan, Mies van der Rohe and Frank Gehry, who designed the sinuously chrome proscenium of the Jay Pritzker Pavilion, where the festival takes place-served as an apropos backdrop to the eclectic lineup. A wealth of Chicago natives, including trumpeter Orbert Davis, saxophonists Nate Lepine, Edwin Daugherty and Cameron Pfiffner; drummers George Fludas and Charles Rumback; and octogenarian piano legends Erwin Helfer and Norman Simmons, handily complemented veterans of the festival circuit: Benny Golson, the Bad Plus, Anat Cohen and a special all-star 95th birthday celebration for Candido Camero. Local up-and-comers were also showcased, among them pianist Alexis Lombre, vibraphonist Joel Ross and the Louder Than a Bomb Festival, an annual youth poetry competition, which presented young poets inspired by Chicago-based composer, drummer and impresario Mike Reed. Chicago may not command the cultural cache of its northeastern cousin, but the city’s history as a jazz hub remains as vital as ever.

Whether or not there is a definable Chicago sound or more of a Chicago continuum, with the avant-garde experimentation of the AACM on one end of the spectrum and the hard-bop architectonics of Gene Ammons and Johnny Griffin on the other, it seems the Chicago aesthetic has one overwhelming commonality: an environment of radical openness. In that spirit, a counter-festival continued in the clubs each night-Vincent Chancey at the Hungry Brain, Kidd Jordan at Constellation, Fareed Haque at the Green Mill or Ira Sullivan at the Jazz Showcase. Newer venues fit comfortably with storied clubs that once hosted cutting sessions with Sonny Rollins, Booker Little and Clifford Brown that were as cutthroat as they were welcoming, and never exclusionary.

At the festival, jazz emerged as a riposte to the charged political zeitgeist. August was reported as Chicago’s most violent month in nearly two decades, and amid growing racial tensions, the city has become a flash point of protests over police brutality. Yet the festival chose to focus on the city’s past as a haven for opportunity, celebrating the centennial of the Great Migration of African-Americans from the Jim Crow South to Chicago.

On Thursday, vocalists Maggie and Africa Brown honored the legacy of their father, the Chicago composer, lyricist and playwright Oscar Brown Jr., foregrounding the characters that populated Chicago’s Bronzeville neighborhood. Bronzeville was front and center in composer, trumpeter and Chicago Jazz Philharmonic founder Orbert Davis’ sprawling “Soul Migration,” a festival commission and world premiere that traced the lineage of African-Americans in Chicago, spanning the influence of former denizens Louis Armstrong and Curtis Mayfield.

On Friday, Tarbaby, the trio consisting of pianist Orrin Evans, bassist Eric Revis and drummer Nasheet Waits, were joined by multi-reedist Oliver Lake, providing a stark contrast to Benny Golson’s quartet. The Liberation Music Orchestra, led by the venerable pianist and composer Carla Bley in lieu of the late Charlie Haden, performed a set of free-jazz-infused Americana and spirituals from a forthcoming album.

On the main stage, bassist Tatsu Aoki, founder of the Chicago Asian-American Jazz Festival, presented his Miyumi project, pairing a free-improvisation ensemble featuring multi-reedists Mwata Bowden and Edward Wilkerson with members of the city’s Tsukasa Taiko percussion ensemble. Later, tenor saxophonist Eric Alexander and pianist Harold Mabern, both of whom cut their teeth in Chicago, had the audience clapping along to “Eddie Harris.” The evening culminated with the Bad Plus’ take on Ornette Coleman’s 1972 Science Fiction album, with Tim Berne, Sam Newsome and Ron Miles, as bassist Reid Anderson handled the work’s pastoral vocals.

Candido’s 95th Birthday Celebration did not disappoint. With a band including trombonist and conch shell specialist Steve Turre, pianist Elio Villafranca, percussionist Sammy Figueroa and vocalist Frankie Figueroa, the only lingering question was Candido himself. After the band performed two opening songs, the iconic percussionist was wheeled onstage. Immediately, Candido dispelled any doubts with an opening salvo on the congas, then stood up and took a bow. Soon, he was leading the audience in call-and-response vocals, playing “Manteca” on precisely tuned congas, but the crowd simply couldn’t follow the clave. At 95, he still has it.

The sound of surprise carried over to Joe Segal’s Jazz Showcase, where erstwhile Chicagoan and multi-instrumentalist Ira Sullivan held court for his annual post-festival jam session. His decades in Miami have taken him out of the spotlight that once saw him alongside Charlie Parker and Roy Eldridge, but at 85, Sullivan can still effortlessly switch between trumpet, flugelhorn and all the reeds. When Steve Turre and Joe Lovano walked in after 11 p.m., Sullivan was still firing on all cylinders, and invited them up. He counted off “What Is This Thing Called Love?” at a blistering tempo that would stifle anyone, but by the end of the vertiginous rush, it seemed this horn battle had gone to Sullivan. Only in Chicago.

Among the many physical, spiritual, and institutional losses related to the still-ongoing pandemic is that of Los Angeles’ renowned Playboy Jazz Festival (PJF) at the … END_OF_DOCUMENT_TOKEN_TO_BE_REPLACED

It’s difficult to imagine what the stage and the audience would have looked like at Gaillard Center in Charleston, South Carolina, if Rhiannon Giddens’ new … END_OF_DOCUMENT_TOKEN_TO_BE_REPLACED

“It’s time to imagine a place where we can come together,” Danilo Pérez said from the hallowed stage of Washington, D.C.’s historic Sixth & I … END_OF_DOCUMENT_TOKEN_TO_BE_REPLACED

At the Zeiders American Dream Theater in Virginia Beach, Va., between April 8 and 10, the Vocal Jazz Summit convened in person for the first … END_OF_DOCUMENT_TOKEN_TO_BE_REPLACED