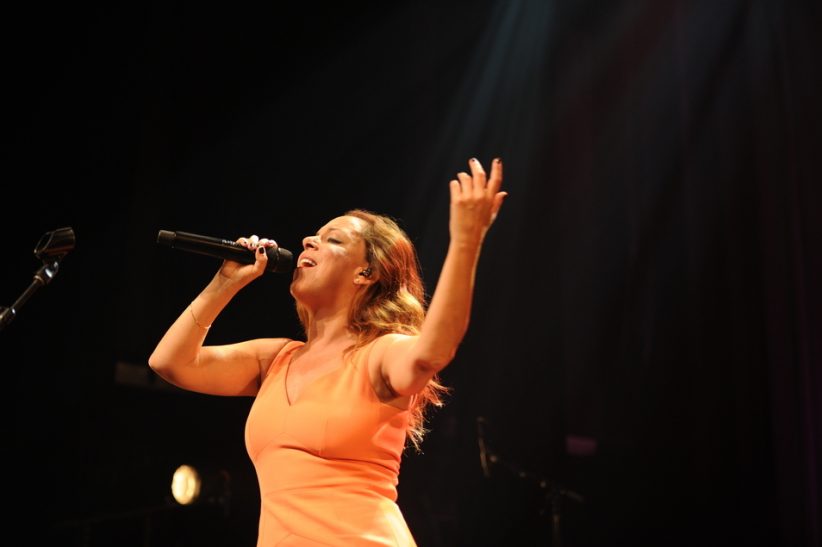 How can one write a postscript for a festival that’s still going on? The answer is I can’t stay for the whole 10, glorious days of the 36th edition of the Festival International de Jazz de Montreal. So I’ll give you some personal highlights from my five days here and ask you to go to the festival website at FIJM.com and get all the details of the astounding variety and depth of styles exhibited in the massive lineup of hundreds of artists and dozens of performances, indoor and outside, paid and free, that represent what has to be the greatest jazz festival in the world.

My activities began not long after landing in the city as Al Di Meola met the press with his acceptance of Miles Davis Award, bestowed upon an artist who has pushed the envelope in jazz, a la Miles, over the years. No one has taken more chances and presented the music in a more varied and inventive approach, from electric to acoustic and with everything from rock-jazz to Latin and Middle Eastern influences than has the man from New Jersey, guitar god Al Di Meola. Festival co-founder and director Andre Menard chatted with Al for a while, invited questions from the press then handed over the golden statue. Al was truly thrilled and touched and said so in conversation I enjoyed with him after the ceremony. We talked about his many Montreal Jazz Festival experiences over the years, his return to electric guitar with his current tour and latest album, Elysium. It was off to sound check for Al and off to the streets of Montreal for me.

After my usual trek to the top of Mount Royal to get the blood flowing and to take in the impressive view of the city below, I was off to hear my first live music. Inside the two-tier venue Club Soda a packed house waited to hear Bebel Gilberto, one of the reigning queens of Brazilian music and the daughter of João Gilberto and singer Miúcha. Her blending of traditional Brazilian style with a modern approach complete with a smattering of electronics to give things a 21st century twist made for a perfect complement to her charming voice and stage presence.

On my way to the beautiful Theatre Maisonneuve for Di Meola’s show the air was filled with the sights and sounds of the festival in the street with thousands gathered to hear free music on outdoor stages all over the downtown area surrounding the Place des Artes, the grand square that holds the many venues and outdoor plaza and the Montreal Modern Art Museum. Every city should have a physical center for culture, but few cities “get it” like this one does. I entered through one of the portals that leads underground to the entrance to the theatre and got ready for Al’s show. Since there are about seven months of pretty cold weather here the city has done a great job of keeping things comfortable with miles and miles of underground spaces. While the crowd soaked up the rare, warm night outside, another crowd, a packed house of mostly baby-boomers, filled the Theatre Maisonneve in anticipation of the start of what is billed as the “Electric Gypsy & More Electric Tour 2015.”

Al told me that the Canadian and Worldwide audiences, even more than the American audience, had been clamoring for him to put together an electric tour that would remind them of his more electric, fusion days as opposed to most of his recent efforts that had been more world music in nature with his legendary World Sinfonia band. Then there was his release All Your Life, his salute to the Beatles recorded at Abbey Road Studios, which was mostly acoustic with just a touch of electric element, pointing to his new electro-acoustic release Elysium and this new electric-dominated tour. Al and his compatriots, which included veteran keyboardist Philippe Saisse and percussionist Gumbi Ortiz, both longtime Di Meola friends and associates, took to the stage and lit a fire that never stopped. The crowd was hungry for some of those familiar classics with fusion-era energy and they were not disappointed. The set included music from Return To Forever as well as the albums Elegant Gypsy, CasinoSplendido Hotel.

To top things off, Di Meola sprung a surprise on the crowd that made this show unique in every way. He told the story of a young man who had attended their show in Toronto just the night before, a tall, strapping young dude from Detroit who had driven to see Al and the band and brought his violin with him. He asked to come backstage to meet the band afterwards, telling Al that he might be young but he knew his music very well and went about the business of showing him on the spot. He was so impressive that Al invited him to come to Montreal and play some tunes with them. He did just that and was absolutely astounding, playing right along with the band during two songs. He played as if he’d rehearsed with them for years and actually traded licks with Al’s fiery, improvised lines, matching him note for note and nuance for nuance. I can’t remember ever seeing or hearing anything quite like this and it left the crowd stunned and me wondering how I was going to top this for amazing performances as the festival progressed.

My next stop took me to hear young trumpeter Theo Croker in the close, friendly confines of the Club L’Astral on the ground floor of the building that houses the festival offices and archives, the Maison Du Festival. The intriguing story of Theo’s big break and debut album, Afro Physicist, is that he was in the horn section backing up Dee Dee Bridgewater in China and she was so impressed with him that she offered to produce his album. On stage with him in Montreal were three more young guys who looked to be a group of college kids but played masterfully, blending modern beats and sensibilities with acoustic instrumentation with inviting results. Theo’s set was another example of the fact that the future of jazz is here; it’s found new rhythms and is in the good hands of inventive, young musicians.

My first day was topped off with a set that frankly surprised me. I didn’t quite know what to expect from the trio of veteran all-stars that bill themselves as NeTTwork. They are bassist Charnett Moffett, drummer Jeff “Tain” Watts and guitarist, and on this evening pianist too, Stanley Jordan. The surprises came in the form of seeing Mr. Jordan playing his familiar tapping style on the guitar while simultaneously playing piano, hearing Mr. Watts playing drums in a completely groove and free style with almost no swing rhythm throughout the set, and hearing the mastery and versatility of Charnett Moffett that was astounding. Mr. Moffett led the way playing two basses through various devices. At once playing in a powerful free style, then in a funky groove mode, followed by an ethereal, flowing style on another bass that he programmed to sound like a sitar. East meets West meets South meets Mars.

Day two brought a return trip to the beautiful Theatre Maisonneuve for another sold-out house filled with more of those fusion-loving baby boomers who packed the place to hear the newest edition of the Stanley Clarke Band. This time Stanley unleashed the incredible keyboard talent that is the Georgia-born (Tiblisi…not Atlanta) Beka Gochiashvili, who is only a teenager but plays like a seasoned master. He was joined by fellow youngsters, 20-somethings Mike Mitchell and Cameron Graves. They blended their talents with the master to bring the crowd to their feet several times. Stanley’s Grammy-nominated latest release UP was not the focus of the set as he began with a Return To Forever classic and followed that with a salute to the recent passing of his old friend and musical collaborator George Duke. “Brazilian Love Affair” was brilliant and uplifting and the set only progressed from there to what I’m sure became one of the great peaks of this fabulous festival.

The 2022 Newport Jazz Festival’s three days of sunshine were bracketed, more or less, by a pair of all-star ensemble jams that included Christian McBride. … END_OF_DOCUMENT_TOKEN_TO_BE_REPLACED

In its first full edition since the onset of the pandemic, and with a new director of programming, the Festival International de Jazz de Montréal … END_OF_DOCUMENT_TOKEN_TO_BE_REPLACED

Among the many physical, spiritual, and institutional losses related to the still-ongoing pandemic is that of Los Angeles’ renowned Playboy Jazz Festival (PJF) at the … END_OF_DOCUMENT_TOKEN_TO_BE_REPLACED

It’s difficult to imagine what the stage and the audience would have looked like at Gaillard Center in Charleston, South Carolina, if Rhiannon Giddens’ new … END_OF_DOCUMENT_TOKEN_TO_BE_REPLACED