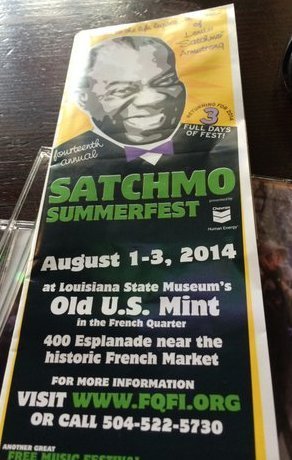 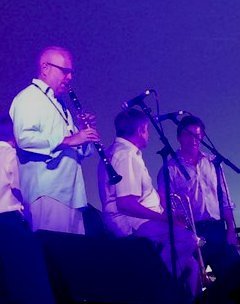 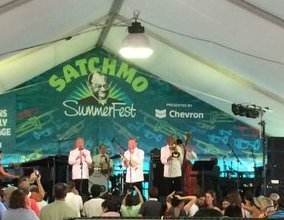 The festival kicked off on Thursday, July 31, with a reception on the top floor of the fabled Monteleone Hotel on rue Royal in the French Quarter. Mosaic Records’ Scott Wenzel and omnipresent “Popsologist” Ricky Riccardi spoke about the genesis and creation of Mosaic’s latest box set, which they co-produced: Columbia and RCA Victor Recordings of Louis Armstrong and the All Stars, 1947-1958. It was an auspicious beginning to an incredible festival.

However, there were two people missing from this year’s festival. Beloved producer George Avakian, 95, could not make it and was sorely missed. If one ate a spoonful of gumbo every time Mr. Avakian’s name was mentioned, one would have a weight problem. Also, trumpeter/legend Lionel Ferbos passed away on July 19, just two days after celebrating his 103rd birthday. To say that Mr. Ferbos was loved in New Orleans would be a vast understatement.

Friday morning was as steamy as New Orleans in August as a youth brass band led a parade from Jackson Square to the grounds of the Old U.S. Mint, where the festival is held. There are two tent-covered stages, one on each side of the massive Mint, so the music is continuous. Representatives from many of New Orleans’ finest restaurants are everywhere, selling some of the finest food on planet Earth. Oh, and there are liquid libations as well. The crowd, which this year topped 57,000, is respectful, mellow and happy—perhaps following the example of Louis Armstrong himself.

French Quarter Festivals Executive Director Marci Schramm and her energetic team deserve plaudits for this incredibly well-organized festival, which is still never lacking in heart. (After the parade but before the first band, the crowd sang “Happy Birthday” to Pops while cake was served!) While folks groove and dance to the music outdoors, others can go inside the air-conditioned Mint to hear a series of Pops-related lectures, hosted by Jon Pult and produced by New Orleans radio host (and Edward R. Murrow Award-winning journalist) Fred Kasten. In the rare moments when a band is not wailing, Pops’ music is wafting overhead. For the Armstrong fan—and who isn’t?—the festival is sheer bliss.

Naturally, I couldn’t hear every act, but here are the ones I did catch:

*Cornet legend Connie Jones and clarinet master Tim Laughlin played a set of passionate, heartfelt New Orleans jazz that brought tears to some folks’ eyes, especially when Connie sang “New Orleans and a Rusty Old Horn.” Laughlin’s latest CD, The Trio Collection, Vol. I (with David Boeddinghaus on piano and Hal Smith on drums), is one of the finest jazz releases of the year.

*Singer John Boutte rocked the stage with his soulful, yearning instrument. Listening to Boutte, one feels in the presence of Sam Cooke’s true heir. A few nights later, in the club dba on Frenchmen Street, he was just as dynamic. Buy several John Boutte CDs today.

*Wycliffe Gordon, one of the world’s greatest trombonists, showed that he is also a fiery trumpet player and powerful singer during his Friday night set. Wycliffe also gave a heartfelt talk entitled “Hello, Pops” on the top floor of the Mint on Sunday afternoon. The jazz world is fortunate to have Wycliffe Gordon.

*The Dirty Dozen Brass Band had the sweaty, dancing audience in the palm of its funky hand. These dudes come to play.

*Leroy Jones and New Orleans’ Finest certainly lived up to its name. After hearing Mr. Jones at last year’s festival, I’ve become a fan for life. This classy musician brings soul by the bucket. Pops would’ve loved him.

*Yoshio Toyama and the Dixie Saints played a beautiful Saturday set with powerhouse Preservation Hall trombonist Lucien Barbarin on board. Mr. Toyama, dubbed “Japan’s Satchmo,” plays an incredible trumpet and sings exactly like Pops. With his wife Keiko on piano and banjo, this band has captured the essence of New Orleans jazz: heartfelt, swinging, respectful of tradition but not bound by it. Also beloved humanitarians, the Toyamas raised money in Japan to bring many musical instruments to New Orleans school kids in the wake of Hurricane Katrina.

*Kermit Ruffins and his Barbecue Swingers wrapped up the festival on Sunday night with their gumbo-drenched swing, playing one Armstrong hit after another. Kermit knows how to keep an ecstatic crowd ecstatic.

In the cool of the Mint, the festival even had a second floor devoted to children, with many activities, including children making their own umbrellas for their own Second Line Parade. As I said, Marci Schramm and her crew don’t miss a trick. (Oh, and across from the kids’ section, encased in glass, is the cornet Louis Armstrong played in the Waifs Home in 1913-14. You can even see where “Little Louie” carved notches in the mouthpiece!)

On the Mint’s third floor, smoothly guided by Jon Pult and Fred Kasten, were the series of Satchmo Summerfest seminars. Again, I couldn’t attend them all, but the ones I heard were fascinating.

*I have to admit that I gave a presentation on my friendships with photographer Jack Bradley, who was Pops’ “white son,” and the ultra-gifted cornetist Ruby Braff. I managed to catch that talk!

*I was also lucky enough to catch the Seminar All Stars—David Ostwald, Dan Morgenstern, Ricky Riccardi, Bruce Raeburn, Yoshio Toyama and Wycliffe Gordon—play a rollicking, quite often affecting (“West End Blues”) set. That rising boy singer, Dan Morgenstern, swung the gumbo out of “I’ll Be Glad When You’re Dead, You Rascal You.”

Sunday was extra special, with a jazz mass held at Saint Augustine Church in Treme. With Mr. Toyoma on the altar, the mass swung with truly stirring singing and playing by the church’s choir. St. Augustine’s is also the church where Sidney Bechet was baptized and worshipped (when he wasn’t being kicked out of England!). Reverend Quentin E. Moody gave one of the warmest, most inspiring homilies I’ve ever heard, and the choir led the way out of the church into … a true New Orleans second line parade that jammed down Rampart Street, past Louis Armstrong Park, and back to the grounds of the Mint. Truly an unforgettable experience, with Indian chiefs in full costume, decorated folks on stilts, and at least four rocking brass bands. I found myself thinking of “Little Louis” Armstrong, in 1914 or so, strolling down the same streets, holding Papa Joe Oliver’s cornet.

This festival, with Chevron as the presenting sponsor, is an incredible, beautiful gem. Next year will be the 15th Satchmo Summerfest. Why not make your plans now? Hey, gumbo, crawfish pie, red beans and rice, po-boys, Abita amber, jazz, Louis Armstrong, parades, New Orleans. If you come, you will enjoy some of the most truly wonderful days of your life.

At SeixalJazz, across the graceful April 25th suspension bridge from Portugal’s capital city of Lisbon, the festival must go on. The last couple of pandemic … END_OF_DOCUMENT_TOKEN_TO_BE_REPLACED

Three jam-packed, sold-out, and high-spirited days of great music marked the 36th Red Sea Jazz Festival, which returned to its home in the Israeli port … END_OF_DOCUMENT_TOKEN_TO_BE_REPLACED

It was the warmest October on record in Seattle. Usually, when the Earshot Jazz Festival comes to town, it provides an escape from the autumn … END_OF_DOCUMENT_TOKEN_TO_BE_REPLACED

It was bracing to stroll into a brand-new creation for a story about destruction. Sixty years after its opening and 45 years after its last … END_OF_DOCUMENT_TOKEN_TO_BE_REPLACED