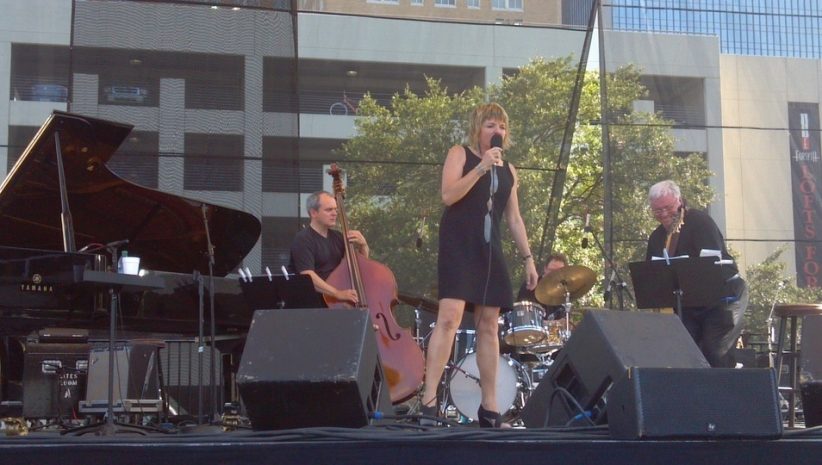 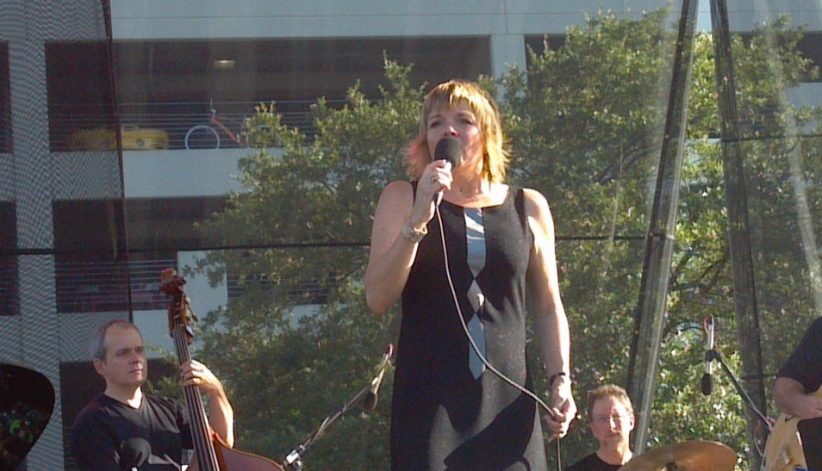 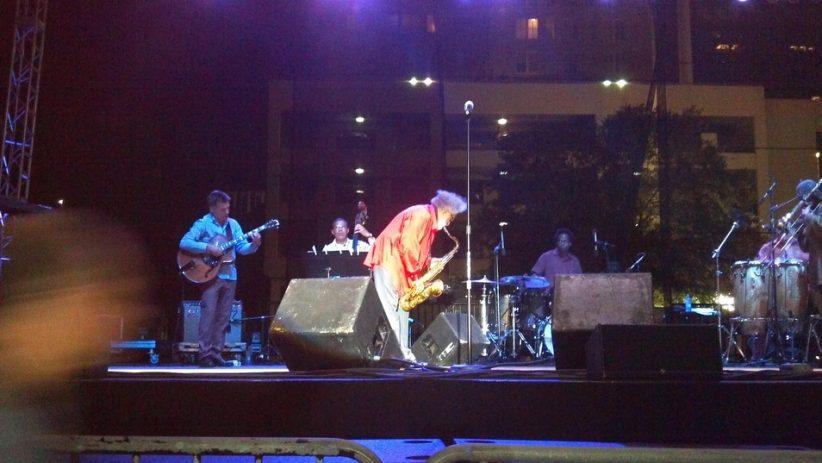 The City of Jacksonville outdid themselves with this year’s lineup, which included a grandeur of stars from headliners, Sonny Rollins, Patti Austin, Bela Fleck, Trombone Shorty, Raul Midon, Jazz Crusaders, Karrin Allyson, Brian Culbertson, and a host of others graced three stages late last month to kick off the annual event held in the center of downtown Jacksonville. Performances were held simultaneously at three stages throughout the area: Swingin’ Stage, Breezin’ Stage and Groovin’ Stage.

Jazz legends Chick Corea, Stanley Clarke and Lenny White of Return to Forever and also the great trumpeter, Terence Blanchard, along with many others were scheduled for the third and final day of the festival. Unfortunately, all performances were cancelled due to Sub-Tropical Storm Beryl, which according to the National Weather Service was due to hit Jacksonville early that Sunday afternoon.

I always look forward to this particular festival every year with great anticipation, partly due to the fact that it is so close to where I live; but most importantly, I am most assured that it will prove to be quite satisfying indeed.

The first night was ingeniously programmed with the legendary saxophonist, Sonny Rollins as the first headliner, who closed out the night with a bang. People young and old filled the streets and stands at the Swingin’ Stage to see or at least hear him again and for some the very first time.

As he walked onto the stage dressed in a chic, red silk shirt, grey slacks and hip black sunglasses while sporting his cool, white afro the crowd stood up in applause while his band laid into tunes from his latest release, Road Shows Vol. 2. I was admittedly mind-blown as I watched Mr. Rollins play with vigor, precision and intention. The audience sat with mouths open as he demonstrated his prodigious talents. His signature song “St. Thomas” turned the street into a massive dance floor as people celebrated this jazz master in the warm, balmy, moonlit night. This performance is one that will stay with me for the rest of my days!

Since the performances take place on three different stages simultaneously, one can only imagine the exhilarating, yet frustrating decisions an attendee must make concerning picking which artist to see. This jazz festival is so well stocked with superior talent that a sacrifice must be made.

On Saturday afternoon, it was pure joy to experience the reunion of Joe Sample, Wayne Henderson and Wilton Felder of the Jazz Crusaders. Sample with his crisp, distinctive sound on piano, Henderson, known for his rich, colorful sounds on trombone and Felder richly pulling it together on tenor sax recreated the trademark sound we have known as the early 1960s. Sample’s son, bassist, Nicklas Sample held the band tightly together as they cruised through memorable songs such as “Sunset,” “The Thing,” “Night Theme” and their widely popular original song “Street Life.” At that point the entire crowd shouted and rocked in unison as they sang the part of Randy Crawford’s vocals, “I play the street life. Because there’s no place I can go. Street life, it’s the only life I know……”

While the Jazz Crusaders were still on stage, I was forced to make the choice to skip over to the Groovin’ Stage a few blocks down to catch the final hour of vocalist and guitar virtuoso Raul Midon. The entire park and street were packed to every corner as people watched in amazement this one-man music machine. If you have not heard his music or had the opportunity to experience his talent you will be in for a treat as you listen to his innovative ability to transform his voice into several instruments while playing his guitar. It was pure music at its best!

Just at 5 p.m. back at the Swingin’ Stage, enter The Rippingtons featuring Russ Freeman celebrating 25 years together. The audience lit up with joy as the band brought them through their most popular songs throughout the years. Freeman took the show to another level when he veered off into Jimi Hendrix’s “Foxy Lady” and “Purple Haze,” as the band followed suit creating an uproar among fans. I thoroughly enjoyed the sudden change and to my surprise found myself dancing. A standing ovation was guaranteed.

In all of the years that I have been in radio, I have found myself particularly fascinated with the vocal talents of Patti Austin. I have even seen her before at the 2003 Clearwater Jazz Holiday. However, nothing prepared me for what I heard that evening.

This night Austin performed her recreation of Ella Fitzgerald’s Gershwin Songbook. Her stage presence commanded attention and adoration from fans of many years. Austin took the audience by storm and surprise with her storytelling of each song with a dash of witty and irreverent humor; tipping the scales with her interpretations of “A Tisket, A Tasket”, “Satin Doll,” “Miss Otis Regrets,” “But Not For Me” and many others while accompanied by the Jacksonville Symphony Orchestra. The album is named simply For Ella.

As usual the City of Jacksonville staff, namely Tiffany Valla, Media Support Specialist, made this year’s festival a pleasure for me. I can always count on this festival to bring the crème dela crème each year for all to see, experience and enjoy. Don’t miss out on the 2013 Jacksonville Jazz Festival; you will have no regrets.

“It’s time to imagine a place where we can come together,” Danilo Pérez said from the hallowed stage of Washington, D.C.’s historic Sixth & I … END_OF_DOCUMENT_TOKEN_TO_BE_REPLACED

At the Zeiders American Dream Theater in Virginia Beach, Va., between April 8 and 10, the Vocal Jazz Summit convened in person for the first … END_OF_DOCUMENT_TOKEN_TO_BE_REPLACED

The Big Ears Festival returned to Knoxville in a big way in late March, drawing an estimated 30,000 music enthusiasts from across the U.S. and … END_OF_DOCUMENT_TOKEN_TO_BE_REPLACED

Let’s get this out of the way: The Savannah Music Festival is not a jazz festival. Held over the course of 17 days in late … END_OF_DOCUMENT_TOKEN_TO_BE_REPLACED