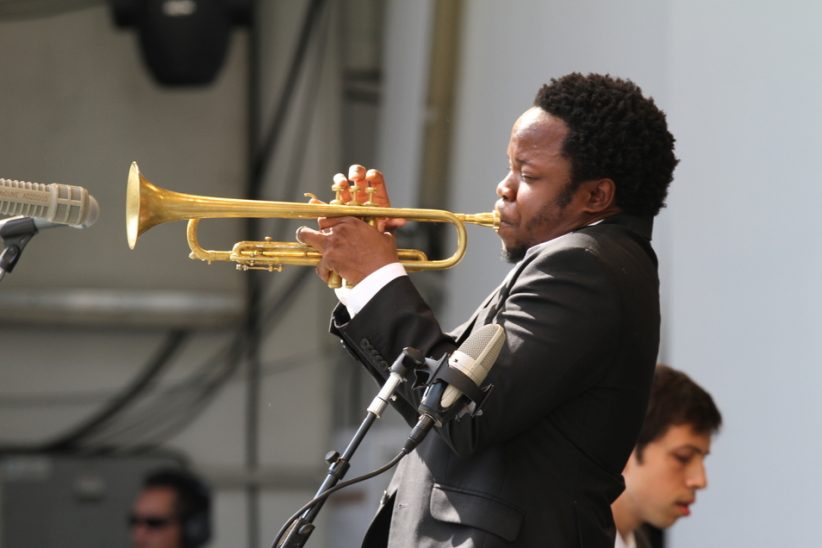 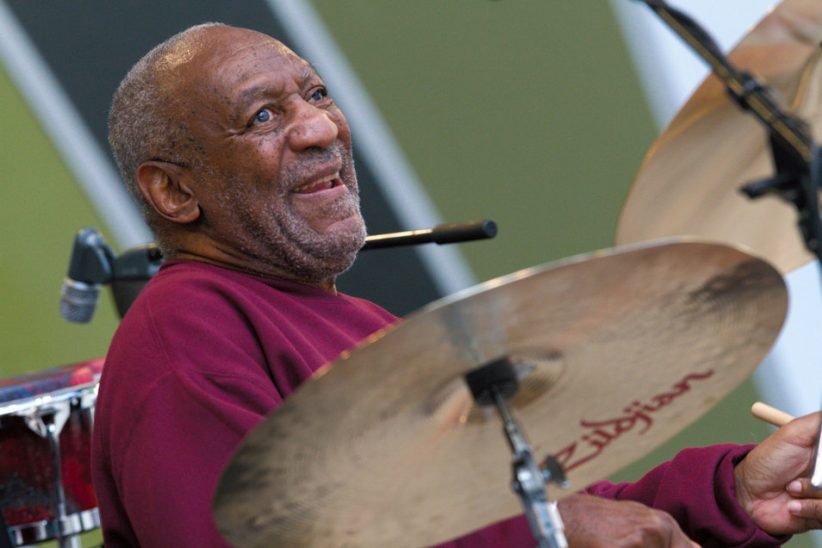 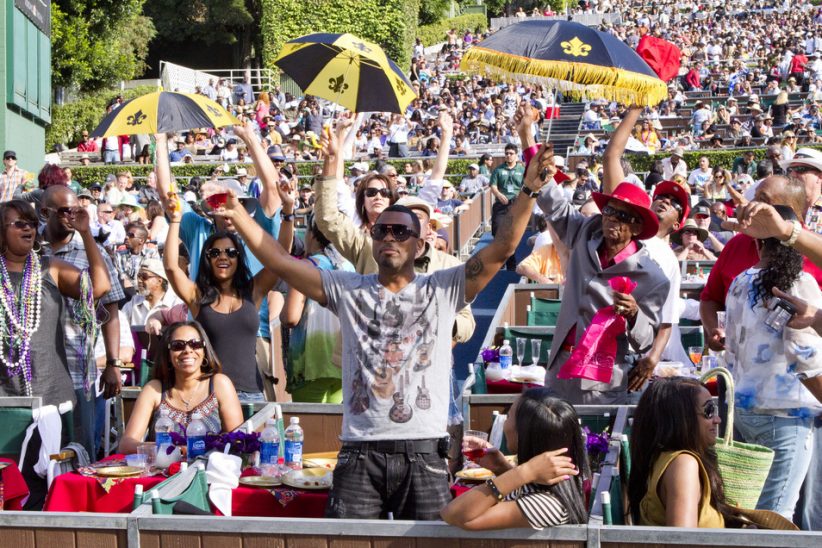 Crowd at the 2011 Playboy Jazz Festival 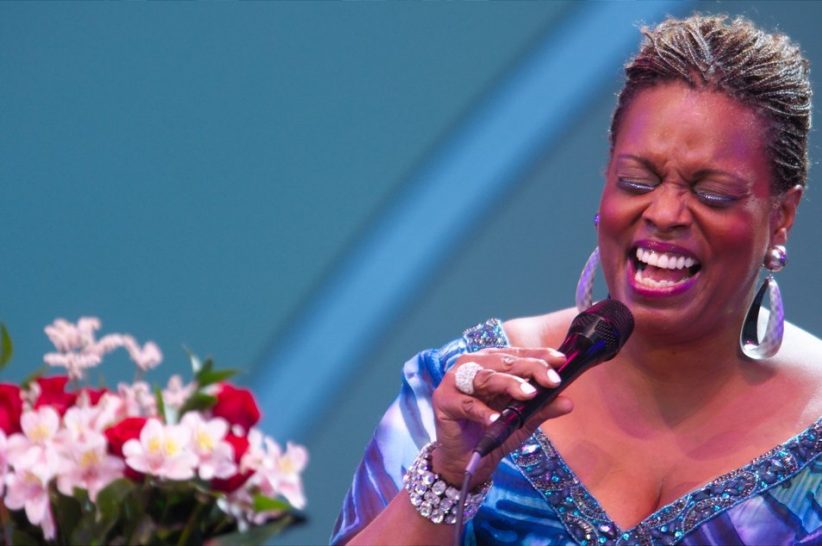 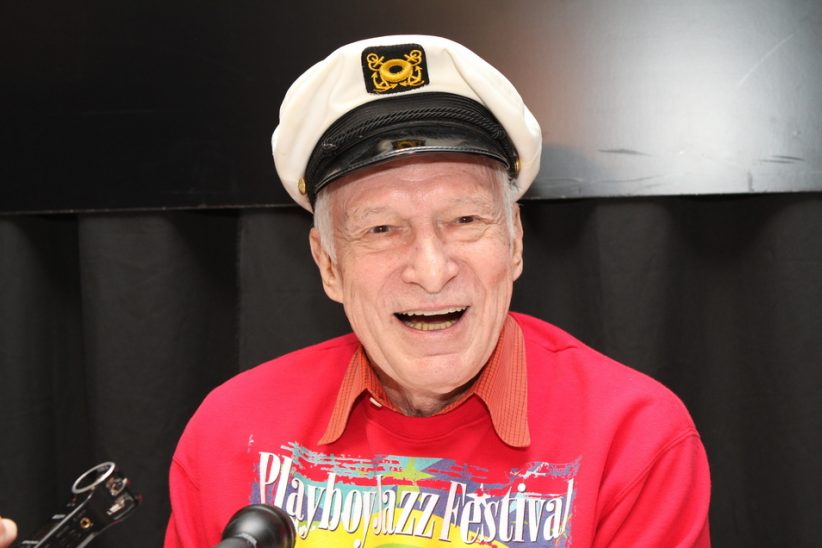 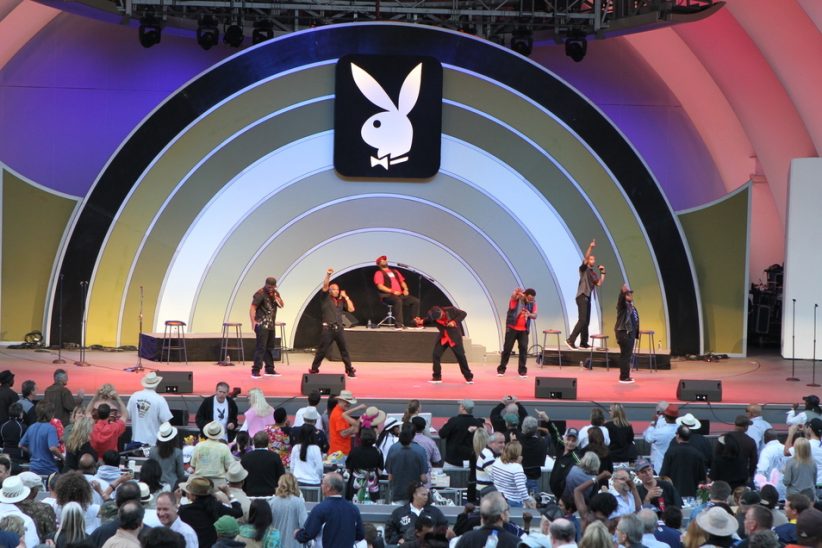 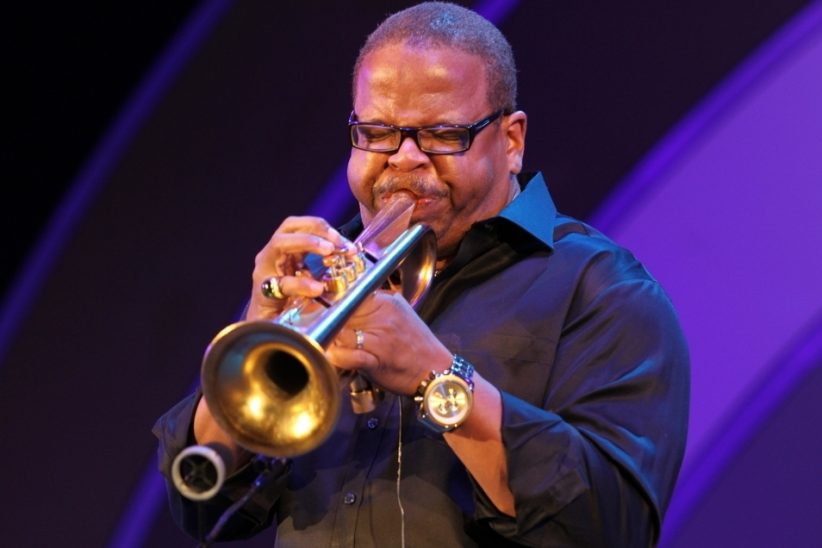 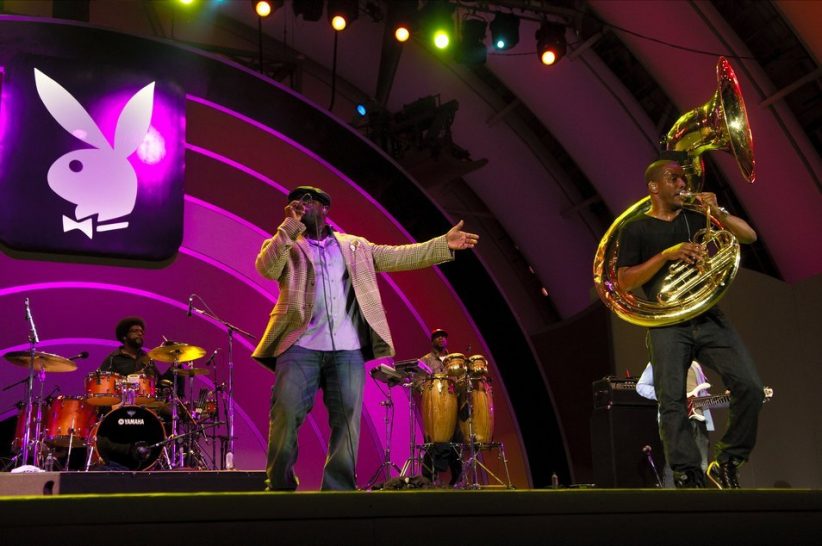 The Roots performing at the 2011 Playboy Jazz Festival

The two-day Playboy Jazz Festival at the Hollywood Bowl in Los Angeles typically never focuses solely on jazz or, for that matter, music. For its 33rd installment, there was much excitement and promotion related to the Playboy brand. Large banners spread around the 19,000 capacity amphitheater announced the debut of the Mad Men-evoking The Playboy Club, airing this fall on NBC.

Furthermore, there was plenty of excitement regarding Playboy‘s founder and CEO, Hugh Hefner, who always makes a grand entrance with at least a half-dozen playmates in his procession. Hefner, 85, would soon be marrying Crystal Harris, a 25-year-old Playmate, and in the festival’s program booklet they were prominently featured and congratulated. Still, festival attendees seemed somewhat oblivious to the Playboy magazine/company events and showed more interest in eating, conversing and partying.

Most of the featured artists are on the festival circuit and perform throughout the country and sometimes the world. However, unique to Playboy was a “Tribute to Oscar Peterson” featuring 2010 Grammy Winner Cunliffe and the Los Angeles-based Resonance Records Big Band. Pianist/arranger Cunliffe played keys while leading the fiery ensemble through “Willow Weep for Me,” “Down by the Riverside” and his award-winning “Westside Story Medley.” John Beasley (piano) played “Cakewalk” brilliantly and Marian Petrescu, who played piano for most of the set, impressed the audience with his solo stride performance. Additionally, bassist Casey Abrams lightened things up by singing “I’ve Got the World on a String.”

Also particular to Playboy was emcee Bill Cosby’s Cos of Good Music band that overflowed with superb talent. His players included Geri Allen (piano), George Bohannon (trombone), Dwayne Burno (bass), Ndugu Chancler (music director/drums), Anat Cohen (reeds), Alphonso Johnson (electric bass) and Babatunde Lea (percussion). Cohen shined brightly throughout the set with astounding playing and soaring solos, and was especially impressive during a rendition of “When We Were Young” and a rollicking “Still Searching.” That last tune also featured invigorating chops by Bohannon, along with pulsation from Allen and the other rhythm players. Cosby, who usually plays light percussion and comically leads the band, smartly was marginally involved and let the pros do their thing.

A sterling roster with the likes of Stefon Harris (vibes), Avishai Cohen (trumpet), Greg Osby (alto saxophone), David Sánchez (tenor saxophone), Robin Eubanks (trombone), Edward Simon (piano), Matt Penman (bass) and Eric Harland (drums) bolstered the SFJAZZ Collective. They put a very sophisticated spin on Stevie Wonder songs, and their renditions were not always easy for the audience to connect with. Tunes that were the most appreciated included a very driving and solo-laden “Superstition” and atmospheric “Creepin’.” Alternately, Dianne Reeves, a perennial crowd favorite and festival regular whom Cosby simply announced as “Dianne,” delivered a stimulating set. She went from the mid-range ballad “Throw It All Away” to funk and a riveting cover of the pop hit “Crazy.” If that wasn’t enough, the singer and quartet agilely mashed the song with “Afro Blue.”

Though not as regular a participant at Playboy, Eddie Palmieri and his Orchestra were electrifying, playing very accessible salsa numbers. Also shaking up the festival was Geri Allen and her Timeline Band. Working with Kassa Overall (drums), Kenny Davis (bass) and, most extraordinarily, Maurice Chestnut (tap dancer), she tastefully melded enchanting dance with postbop numbers and the ballad “Unconditional Love.” Blanchard was equally fiery during his fast-paced set, staying in a mostly hard-driving, postbop mode, even for “Footprints.” A soulful ballad was thrown in for good measure and, surprisingly, the bandleader didn’t inject any New Orleans touches as he customarily does during performances.

In the category of something completely different was the 3-year-old showcase “Still Black, Still Proud: An African Tribute to James Brown.” It united former Brown sidemen Pee Wee Ellis (tenor sax) and Fred Wesley (trombone) with African vocalists/guitarists Vusi Mahlasela and Cheikh Lo, along with American singer Fred Ross and a hard-hitting ensemble. Initially, the players sounded more like Tower of Power before shifting to rekindle Brown’s infectious sound for “I Got the Feeling,” ballad “Try Me,” a very dynamic “Cold Sweat” and the legendary “Say It Loud-I’m Black and I’m Proud.” Lo added diversity to the program with a folksong about the Malian River that related to Brown appearing in that region, and “Africa” combined the continent’s traditions with funky soul for a jubilant celebration.

Although the Playboy Jazz Festival has become more so a music festival rather than a per se jazz festival in recent years, it still offers memorable appearances by top-notch artists in the genre. Furthermore, it makes a point of spotlighting emerging players, such as Akinmusire and 12-year-old singer-guitarist Quinn Sullivan, who blazed away during Buddy Guy’s segment to the audience’s amazement. Overall, it isn’t too likely the roster mix will ever change, and it’s hard to argue with success. And, by the way, two days after the festival Harris called off the wedding with Hefner.

The 2022 Newport Jazz Festival’s three days of sunshine were bracketed, more or less, by a pair of all-star ensemble jams that included Christian McBride. … END_OF_DOCUMENT_TOKEN_TO_BE_REPLACED

In its first full edition since the onset of the pandemic, and with a new director of programming, the Festival International de Jazz de Montréal … END_OF_DOCUMENT_TOKEN_TO_BE_REPLACED

Among the many physical, spiritual, and institutional losses related to the still-ongoing pandemic is that of Los Angeles’ renowned Playboy Jazz Festival (PJF) at the … END_OF_DOCUMENT_TOKEN_TO_BE_REPLACED

It’s difficult to imagine what the stage and the audience would have looked like at Gaillard Center in Charleston, South Carolina, if Rhiannon Giddens’ new … END_OF_DOCUMENT_TOKEN_TO_BE_REPLACED