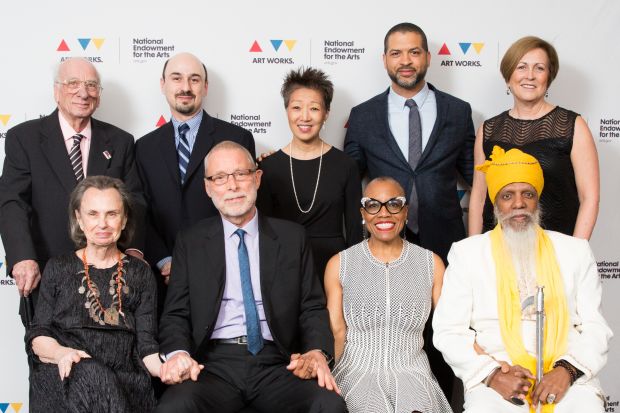 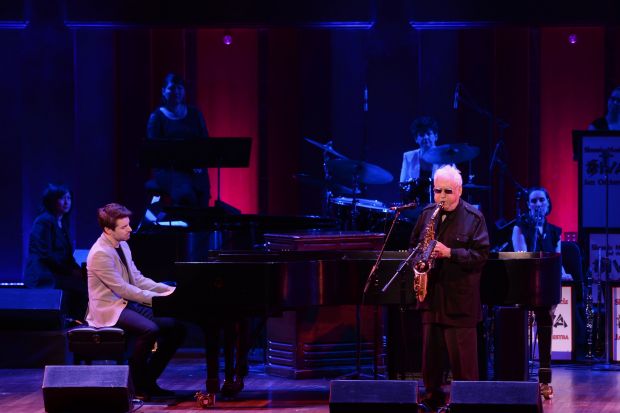 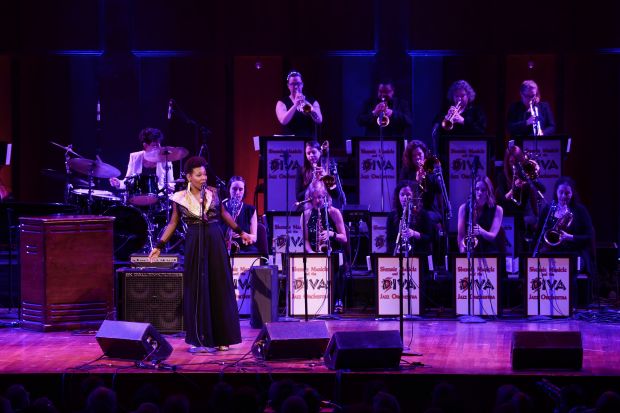 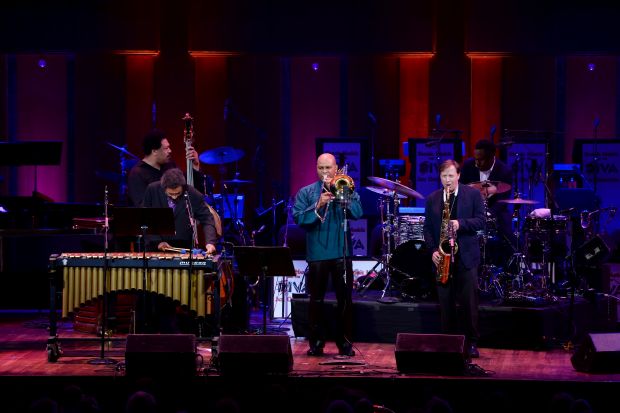 The interjection “Not to get political, but…” became a leitmotif in writer Gary Giddins’ speech honoring fellow critic Ira Gitler at the 2017 Jazz Masters tribute concert (held for a second year at the Kennedy Center in Washington, D.C.). Not getting political was a difficult undertaking at the 35th anniversary of the National Endowment for the Arts’ fellowship for jazz musicians, the highest honor that the U.S. government offers the music. The Trump Administration’s budget proposal for fiscal year 2018 calls for the elimination of the NEA, among other federal agencies.

Faced with its endangerment, this year’s recipients of the Jazz Masters fellowship used the ceremony as a rally for its preservation—in Giddins’ words, “that jazz advocacy of the hip, by the hip and for the hip shall not perish from the Earth.”

Organist Dr. Lonnie Smith accepted the honor by first thanking the NEA “for the oncoming contributions—oncoming and ongoing, it never stops.” Without mentioning the agency again, he described the importance of supporting the arts: “Constantly, every day of our life, we have to look for work,” Smith said. “We cannot buy a house. We do not have insurance. But we still do what we love.”

Bassist Dave Holland mixed his endorsement of arts advocacy with other timely politics. “I came to this country almost 50 years ago,” he said to great applause. “And I came as an immigrant.”

Unsurprisingly, however, it was vocalist Dee Dee Bridgewater who was the most outspoken on the subject. “The NEA has provided the opportunity for artists to dream and to share their dreams with people all around the globe. That’s something to protect,” Bridgewater said in her extemporaneous remarks. “I was proud to be a part of the National Public Radio family for the 13 years I hosted JazzSet; a lot of the funding we had came from the NEA. We must not allow this to go away.”

These pleas were not one-sided. The audience was loudly sympathetic: It applauded, cheered and sometimes outright whooped at the appropriate points in these statements. Indeed, during opening remarks by pianist Jason Moran (the Kennedy Center’s Artistic Director for jazz), his very mention of “National Endowment for the Arts” triggered an extended ovation.

Each artist’s speech—which apparently had no time limit, pushing the program more than an hour over its 90-minute billing—capped a tribute to that individual, in music as well as words. Gitler, the one honoree who was not present (he was recuperating from an illness; his son, Fitz, accepted on his behalf), was saluted with a performance by alto saxophonist Lee Konitz. He did a duet with pianist Dan Tepfer on “All the Things You Are,” though their improvisation was so elaborate that the written melody was barely present; Konitz did a vocal scat that was raw and moving, a highlight of the evening. He also was featured on “I Can’t Get Started” with Sherrie Maricle’s DIVA Orchestra, which served as the evening’s house band. Nonagenarian pianist Dick Hyman watched as two younger players, Bill Charlap and Aaron Diehl, performed a high-polish medley of his compositions on interlocked grand pianos. Holland also received the medley treatment: His tunes “Prime Directive” and “Make Believe” were arranged by Chris Potter and played by Holland’s reunited Prime Directive quintet (Potter, trombonist Robin Eubanks, vibraphonist Steve Nelson, drummer Nate Smith) with James Genus standing in on bass. Potter and Eubanks engaged in a joyful counterpoint dialogue, another of the concert’s peaks.

Smith was serenaded by Matthew Whitaker—a 15-year-old blind pianist and organist—who played “Mellow Mood,” a Jimmy Smith composition that’s one of Dr. Lonnie’s favorites; organ legend Booker T. Jones then took over the keys to perform a soulful rendition of the honoree’s “It’s Changed” with Genus, Nate Smith and guitarist Mike Moreno. Finally, Dianne Reeves sang “I Wish You Love” in tribute to Bridgewater (with special lyrics in the bridge: “All of your friends and I agree that you are jazz royalty”). Bridgewater’s daughter, R&B singer China Moses, concluded with “Undecided,” accompanied by DIVA.

Politics unquestionably loomed over the concert, with the understanding that it might be the last of its kind; still, the joy of the honorees, and of the music, did much to cancel out the specter. “There’s no room for arguments and fights,” Smith said in his speech, “because music is healing.”

It’s difficult to imagine what the stage and the audience would have looked like at Gaillard Center in Charleston, South Carolina, if Rhiannon Giddens’ new … END_OF_DOCUMENT_TOKEN_TO_BE_REPLACED

“It’s time to imagine a place where we can come together,” Danilo Pérez said from the hallowed stage of Washington, D.C.’s historic Sixth & I … END_OF_DOCUMENT_TOKEN_TO_BE_REPLACED

At the Zeiders American Dream Theater in Virginia Beach, Va., between April 8 and 10, the Vocal Jazz Summit convened in person for the first … END_OF_DOCUMENT_TOKEN_TO_BE_REPLACED

The Big Ears Festival returned to Knoxville in a big way in late March, drawing an estimated 30,000 music enthusiasts from across the U.S. and … END_OF_DOCUMENT_TOKEN_TO_BE_REPLACED