The Count Basie Orchestra performs at "100: The Apollo Celebrates Ella!" 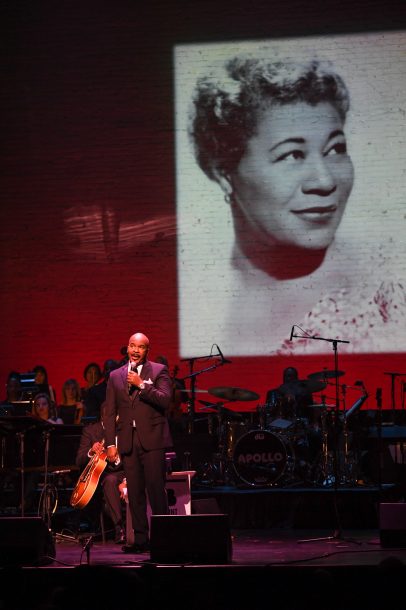 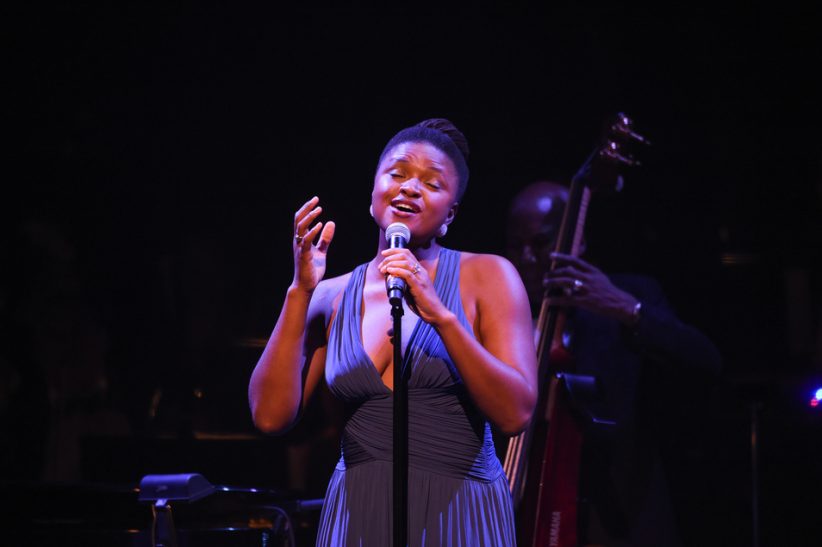 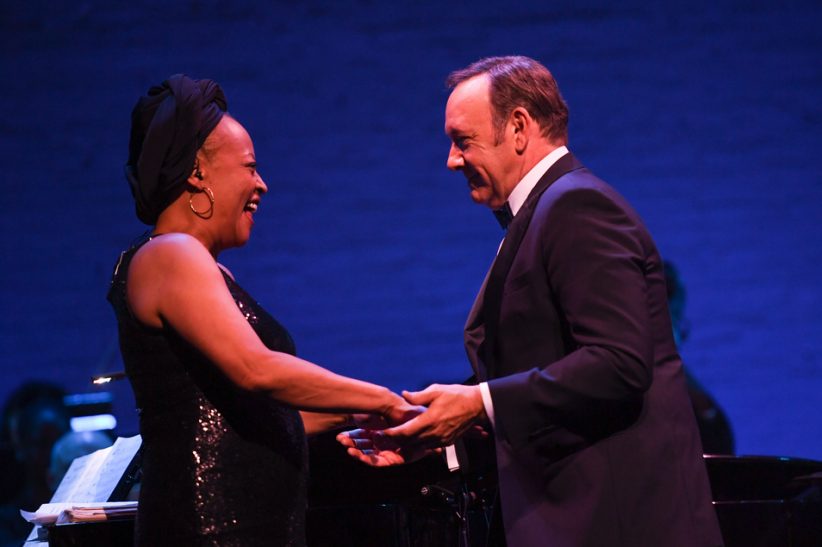 It’s one of those random show-biz moments that history tells us had to happen just the way it did: Ella Fitzgerald was a shy 17-year-old on Nov. 21, 1934, when she was called upon to prove herself on Amateur Night at the Apollo Theater. Looking out nervously at the crowd, she decided not to dance, as she had planned, but to sing instead. After a tentative start, she soon owned the audience. A year later she was fronting Chick Webb’s band. Now her face adorns a United States postage stamp.

The only dancing that took place at “100: The Apollo Celebrates Ella!,” the multi-artist tribute concert held at the Harlem landmark on Oct. 22, was done by the actor Kevin Spacey, here to represent Frank Sinatra, with whom Fitzgerald recorded numerous memorable sides. Following an inspired duet with the outstanding young singer Andra Day on “The Lady Is a Tramp,” Spacey-a formidable vocalist-launched into the standard “Without a Song.” So stoked was he by the Nelson Riddle arrangement being turned out by the still-in-business Count Basie Orchestra (now under the direction of trumpeter Scotty Barnhart), he sashayed across the stage spontaneously.

Spacey’s turn at the mic came late in the show’s second half, by which time his offering, albeit impressive and fun, was anticlimactic by default. The program had begun with a brief, spirited performance of “Judy”-the song with which Ella had dazzled 82 years earlier-by the young singer Ayodele Owolabi. She, along with the entire vocal octet to which she belongs, Afro Blue-formed at Howard University in 2002-also closed out the first set, with a rousing “How High the Moon,” accompanying co-host Patti Austin, who’d gotten her own start at the Apollo at age 4.

Austin had followed Owolabi to the stage an hour earlier with a trio of Fitzgerald staples: the career-launching 1938 hit “A-Tisket, A-Tasket,” “When I Get Low, I Get High” and a breathtaking “Miss Otis Regrets,” for which Austin was initially accompanied solely by pianist Shelly Berg before the band worked its way in. She could have stayed up there all night and sent this audience home happy, but highlight after highlight was still to come. The first set was filled out with numbers from Day, whose style is more comparable to Billie Holiday than Ella but suited her well on “Ain’t Misbehavin'”; the other co-host, actor/singer David Alan Grier “(Do Nothin’ Till You Hear From Me”) and the orchestra’s own singer-less turn.

Part two kicked off with Monica Mancini, who told of meeting Fitzgerald via her late father, Henry, before singing “Give Me the Simple Life” and, accompanied only by guitarist Brian Nova (a protégé of Ella colleague Joe Pass), an elegant “Once in a While.” Fitzgerald’s work with the quartet was celebrated by Lizz Wright, a perfect match for the stripped-down ensemble of Berg, Nova, bassist Nathan East and drummer Gregg Field. Comparing Ella’s voice to “clouds of comfort,” Wright’s “Love You Madly” and “The Nearness of You” made ideal use of her own creamy, mellifluous tone.

Austin and Grier’s Porgy and Bess medley, another break by the orchestra and the Spacey segment led finally to Cassandra Wilson, whose “Blues in the Night” didn’t so much channel Fitzgerald as suggest another way she might have handled it. Wilson then told of how the song “Cry Me a River,” written for Fitzgerald to sing in the 1955 film Pete Kelly’s Blues, ended up going instead to director Jack Webb’s wife Julie London, because Webb refused to believe that an African-American woman would ever use the word plebeian, part of the lyric. Wilson performed it the way Fitzgerald ultimately did-haunting, chilling, plebeian in place.

A delicious irony that ended up being, because plebeian means, among other things, belonging to the common people. Fitzgerald was described by several of this evening’s speakers as a down-to-earth, humble woman, even at the peak of her celebrity. There was, of course, nothing common about what she did with a song though, and listening to this parade of paeans on this famous stage, it was easy to imagine that frightened but brave young girl-whose actual centennial arrives next April 25-first hushing and then inciting a wild ovation from astounded, everyday Harlemites on a long-ago Wednesday night.

Among the many physical, spiritual, and institutional losses related to the still-ongoing pandemic is that of Los Angeles’ renowned Playboy Jazz Festival (PJF) at the … END_OF_DOCUMENT_TOKEN_TO_BE_REPLACED

It’s difficult to imagine what the stage and the audience would have looked like at Gaillard Center in Charleston, South Carolina, if Rhiannon Giddens’ new … END_OF_DOCUMENT_TOKEN_TO_BE_REPLACED

“It’s time to imagine a place where we can come together,” Danilo Pérez said from the hallowed stage of Washington, D.C.’s historic Sixth & I … END_OF_DOCUMENT_TOKEN_TO_BE_REPLACED

At the Zeiders American Dream Theater in Virginia Beach, Va., between April 8 and 10, the Vocal Jazz Summit convened in person for the first … END_OF_DOCUMENT_TOKEN_TO_BE_REPLACED