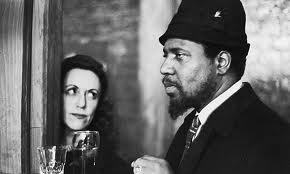 Like a classic Hollywood movie, the history of jazz is memorable not just for its stars, but also for the supporting players, and few are more memorable than the Baroness Pannonica de Koenigswarter, a British aristocrat who walked away from a life of privilege to become “patron saint for a couple of generations of ‘jazzophiles.'” David Kastin has wisely chosen her as the subject of his book Nica’s Dream: The Life and Legend of the Jazz Baroness, a well-written and engaging volume that nevertheless sometimes frustrates in the manner in which it occasionally sidelines the Baroness, rendering her a supporting player in her own story.

Born an heir of the house of Rothschild, “Nica” married into a baroness’ title, bore five children and served as a translator and broadcaster during World War II, but in many ways her life really began with an early encounter with Duke Ellington’s tone poem “Black, Brown and Beige.” Thus commenced a love affair with jazz that led her to spend the rest of her life (she died in 1988) as an old-school patron of the arts, providing promotional support, rehearsal space, food and shelter to an extensive list of the music’s greats. Among her most notable beneficiaries were Charlie Parker, whose death in her hotel suite sparked a scandal that helped end her marriage, and Thelonious Monk, whose well-being and musical ascendancy the Baroness made into a lifelong project. She attended Monk’s gigs, worked with manager Harry Colomby on the best presentations for his music, and eventually took him into her modernist Weehawken, N.J. home when even living with his own family proved too much for him. For her sacrifices, she lives on as the namesake of “Pannonica,” one of Monk’s most beloved compositions.

Kastin’s writing vividly conveys the Baroness’ outsized personality, one that sometimes veered toward self-parody. He paints a colorful portrait of her whipping from club to club in her silver Rolls Royce, cigarette holder between her teeth, peppering her speech with four-letter words delivered in an upper-crust English accent. He’s also unafraid of detailing the darker episodes of her life, as with an extensive account of an on-the-road pot bust that left Monk devastated, and he touches on accusations that dogged her throughout her patronage career, charges of liberal white condescension, negligence of her friends’ substance-abuse problems, and plain bad parenthood (Nica remained in contact with all of her children throughout her life, but all have refused to participate in any project memorializing their mother, including this book).

Kastin also provides a rich cultural context for the Baroness’ adventures. Too rich, in fact. Nica’s immersion in the American jazz scene commenced at the beginning of the 1950s, and she had a front-row seat for the waning of bebop, the polarizing flights of Ornette Coleman’s “new thing” and the politicized struggles that would result in the music’s late-20th-century recession from mainstream popularity. All important events in the music’s history, but Kastin too frequently chronicles these events without bothering to centralize Nica’s role within them. Contextualizing the world in which Nica operated is not unwelcome, but her lack of presence in these sections sometimes makes them feel like padding for an already fairly modest volume.

Still, the Jazz Baroness’ story demands even an imperfect telling, and Nica’s Dream is an entertaining presentation of a life worthy of commemoration. In an obituary printed in DownBeat, Peter Keepnews said that Nica’s life was “eloquent proof that not every person who makes a major contribution to jazz is a musician.” Kastin’s book, digressions and all, provides that same kind of proof.

First published in 1997, now republished with a new introduction, Jackie Kay’s Bessie Smith unrolls less like a formal study of the singer and much … END_OF_DOCUMENT_TOKEN_TO_BE_REPLACED

Like its author, a memoir of John Lurie’s could zig and zag in a dozen directions. There’s the acting career that brought him to the … END_OF_DOCUMENT_TOKEN_TO_BE_REPLACED