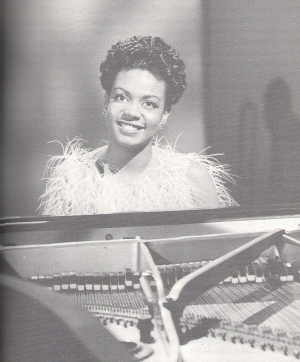 The subtitle of this compact and engaging book provides a bare thumbnail sketch for the narrative arc of the life of Hazel Scott, who was clearly a pioneer on several fronts. But certainly there is much more to her story and Karen Chilton does an excellent job telling it in succinct and lucid fashion. Scott was born in Trinidad but early in her life moved to Harlem with her mother, a frustrated concert pianist, who later became a jazz saxophonist. Scott was clearly a prodigy, enrolling as a private student at Julliard by the time she was eight and performing concerts shortly thereafter. Scott’s home life was difficult at least in part because of the intense demands on her at a young age, but Chilton doesn’t engage in the sort of literary psychoanalysis which has become de rigeur in modern biography. Instead she simply stays in the moment with her subject and readers can draw their own conclusions about the origin of Scott’s unique determination and pride. That pride led her to many a confrontation in the Jim Crow days when she came to prominence and that determination enabled her to take real action, via lawsuits, boycotts and public condemnation-all strategies which would in time be staples in the playbook for the Civil Rights movement that was to follow. Chilton smartly doesn’t feel the need to provide too much historical context for that time.

Likewise, Chilton doesn’t get bogged down with explaining the genesis of swing and bebop, with which Scott became immersed. Scott was personally mentored by Fats Waller and Art Tatum, and her own piano style would draw heavily on those men and on her classical training. Indeed, Scott became known for a particular sort of piano-playing that was quickly labeled “Swinging the Classics” and Chilton deftly describes that musical approach (and others) in layman’s terms. Thanks to a regular gig at Café Society and subsequent appearances in Hollywood films (always playing herself), Scott became a glamorous and world-renowned performer. A fixture on the New York jazz scene of the 40s and 50s, her friends included Billie Holiday, Lester Young, Thelonious Monk, Dizzy Gillespie and Mary Lou Williams (who became perhaps Scott’s longest and closest friend). Indeed, Scott’s home became a salon for some of the most creative artists of the 20th century.

Her own career sagged after a tumultuous marriage to Adam Clayton Powell, Jr, the larger-than-life Baptist minister and congressman. After their somewhat bitter split and an unyielding appearance before the Red-baiting HUAC, Scott emigrated to Paris and struggled though financial, emotional and physical issues, yet never lost that pride. Her letters to Williams and other friends vividly illustrate Scott’s discomfort with accepting the financial help that she desperately needed at that time. Throughout the book, relying on access to Scott’s unpublished memoirs, Chilton lets Scott’s words punctuate the events of her storied life.

Perhaps the highest compliment one can pay to this fine biography is that during the first 150 pages the reader is wondering why Scott isn’t better known, at least in the jazz world. But by the story’s end in 1981 with Scott’s death from pancreatic cancer, the same reader knows exactly why, but is still likely to be singing her praises as a true trailblazer in African-American culture.

Learn more about Hazel Scott: The Pioneering Journey of a Jazz Pianist, from Café Society to Hollywood to HUAC on Amazon and Barnes & Noble!

Nabil Ayers didn’t need to write a memoir about what rarely existed between him and his biological father, composer/vibraphonist Roy Ayers, to connect with making … END_OF_DOCUMENT_TOKEN_TO_BE_REPLACED

“I’m sorry, but your friend didn’t make it.” And with that, a small group of friends, loved ones, and co-workers knew the death of William … END_OF_DOCUMENT_TOKEN_TO_BE_REPLACED