Skip to content
Become a member and get exclusive access to articles, live sessions and more!
Start Your Free Trial
Home > Reviews > No Paywall > Gene Santoro: Myself When I Am Real: The Life and Music of Charles Mingus 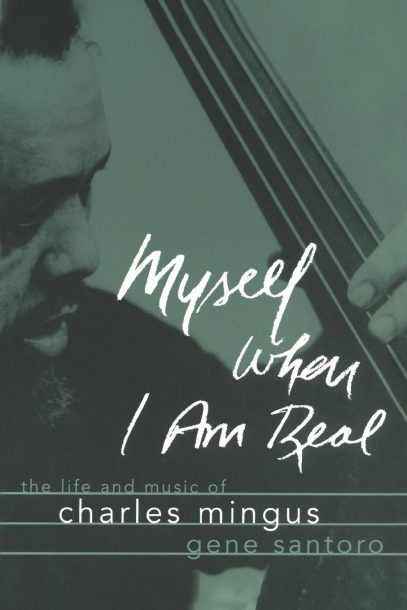 Myself When I Am Real by Gene Santoro

In this thoroughly enlightening and revealing biography of Charles Mingus, writer Gene Santoro applies the same meticulous journalistic detective work to his imposing subject as Woodward and Bernstein applied to Richard Nixon and the Watergate cover-up. No stone is unturned in his pursuit of facts, causal events and relationships along the way regarding the enigmatic bassist/composer, whose awesome, sprawling body of work encompassed blues, gospel, trad jazz, fusion, swing, avant-garde, Afro-Latin, orchestral tone poems, chamber jazz and bebop and stands second only in scope to that of his hero, Duke Ellington.

Much has already been written about Mingus’ music, including his own outrageous autobiography, Beneath the Underdog. But in Myself When I Am Real, Santoro digs up the motives behind the myth of Mingus, the root causes for his anger, hostility and pent-up rage, the sources for the creative vision and impulses that fueled such masterworks as Pithecanthropus Erectus, The Clown, Blues and Roots, Mingus Ah Um, Cumbia and Jazz Fusion and Epitaph. In some cases, Santoro finds the key to this larger-than-life figure—like discovering Charles Foster Kane’s Rosebud—by tracing the family ancestry back to Mingus’ multiracial roots. He inherited his light, yellowish skin from his mother (whose own father was Chinese from a Hong Kong Chinese man and a British subject) while his stern, violent streak (and extremely bowed legs) came from his domineering and aloof father, Staff Sergeant Charles Mingus Sr., a career Army man. The product of that union was a child who got beat up and harassed by white kids for being black, beat up and harassed by black kids for not being black enough. As Santoro elucidates in one of many perceptive observations: “For Charles Mingus Jr., the neurotic contradictions of American racism were personal—highly personal. Paradox was at the heart of his darkness. He talked about it endlessly, not always coherently, at times thoughtfully, often provocatively. Race was painfully complex for him, though that complexity came out at times as self-contradiction. It was a matter of fierce pride and bitter resentment because his appearance could be so racially ambiguous—because his skin was not black.”

Aside from probing the depths of Mingus’ easily wounded and explosive nature, he traces the development of the man’s music—from his formative years in Watts to early apprenticeships with Lionel Hampton and Red Norvo, to the formation of the Jazz Workshop and the eventual realization of magnum opuses like The Black Saint and the Sinner Lady and “Goodbye Pork Pie Hat”—through an endless series of personal testimony from key colleagues like Buddy Collette, Chico Hamilton and Britt Woodman, along with insights from critics, former wives, friends and family members. There are vivid anecdotes and vignettes depicting Mingus’ struggles with record companies and nightclub owners, his working relationships and strained friendships, his musical triumphs and failures. And again, the degree of detail—right down to precisely what Dannie Richmond was drinking on a given night at the Five Spot—is mind-boggling.

A major work written in a lively and entertaining style, Myself When I Am Real gets beyond the myth and goes right to the core of one of the most formidable and fascinating figures in jazz history.

Q&A with Gene Santoro (author of Myself When I Am Real: The Life and Music of Charles Mingus)

JazzTimes: What was it about Mingus that made you want to write about his life?

Initially it was the extraordinary music. I’ve known Mingus’ music since I was a kid in high school and college. When I decided I wanted to write a book, a full-length biography, I cast around for a couple of different subjects and Mingus was the one that struck. As I began to talk with people in a preliminary way regarding what they knew about him and what they remembered, very different pictures emerged. As a reporter, that began to intrigue me. So the question became, in part, how do you square this very small picture, almost a caricature of what this guy is like, with the very expansive universe of his music? And that’s what really propelled the rest of the book, the inquiries, the research, the interviews, the whole bit.

In your book you suggest that the core of his personality is rage. How much of that came from his struggle to establish a multiracial personal identity, and how much came from any overt racism he may have encountered? Where do you think the rage came from?

All of those things. His father was a considerable influence as well. Mingus’ father was an Army sergeant for 20 years and he treated his kids pretty much the way he treated his troops. When Mingus’ father didn’t get what he wanted, he broke out into rages. I’m not saying it was a straight-line progression, but it’s hard to get away from the fact that Mingus grew up with that background.

Yet, he was also a romantic, wasn’t he?

From a young age he had attachments to females. He saw in them a place he could be relatively safe. He trusted them more than he trusted men. He found women as muses, and as he grew older and his life became more complicated, he would create or foster dramas about women in his life, which would then almost provoke him into creativity. It was a pattern that held through much of his career, until the day he died.

What is so special about Mingus as a bassist and as a composer?

Well, as a bassist he had extraordinary technique. One of the first instruments he played was the cello, and if you listen to his bass playing I think you can tell. He’s one of the people who followed in the footsteps and breakthroughs of Jimmy Blanton, who was a mentor of sorts to Mingus. They ran together a bit in Los Angeles when Ellington was out there. If you listen to some of Mingus’ lines on the bass you can hear beautiful flowing melodies that people weren’t used to playing; you don’t hear typical notes coming out of a Mingus bass pattern. As a composer, Mingus wrote such an array of different size and type of pieces, they cover the emotional and psychological colors of the rainbow. This goes back to why I wrote the book. There was all this creativity in the music and the question became, Who’s the guy that it all came from? He was insatiably curious and he would take music from anywhere, whether it was the jazz or the classical forms that he loved, cumbias from Colombia or Indian ragas. He was always looking for new and different things, and ways to synthesize them into what he did. He was interested in figuring out how things work and absorbing them, and that’s one mark of a true artist and composer.

Nabil Ayers didn’t need to write a memoir about what rarely existed between him and his biological father, composer/vibraphonist Roy Ayers, to connect with making … END_OF_DOCUMENT_TOKEN_TO_BE_REPLACED

“I’m sorry, but your friend didn’t make it.” And with that, a small group of friends, loved ones, and co-workers knew the death of William … END_OF_DOCUMENT_TOKEN_TO_BE_REPLACED