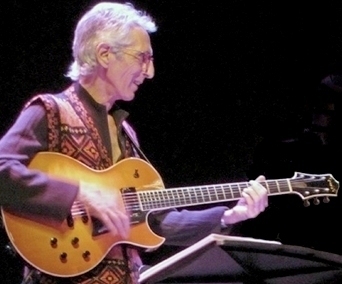 As co-writer Bill Milkowski suggests in his introduction to Here and Now!, the autobiography of legendary guitarist Pat Martino, the most remarkable thing about this book is that it exists at all. In 1980, with his career flourishing, Martino suffered a near-fatal aneurysm, the result of an arterial entanglement in his brain that had caused him seizures and hallucinations for years. Martino survived, but the result was near-total amnesia. He battled back from harmful medications and tentative re-exploration of his instrument to find personal solace, romantic fulfillment (he married fellow guitarist Ayako Asahi in 1997) and, thankfully, his chops, beginning the second act of his career as a respected elder statesman of jazz. It’s a blessing that Martino is still with us to share this remarkable story, even if the resulting volume sometimes reads more like notes for a memoir than the finished product.

Only the first two-thirds of Here and Now! constitute a biographical treatment of Martino. The book covers his early experience with R&B legend Willis “Gator Tail” Jackson, his debut solo recording El Hombre (1967) and subsequent, more experimental discs like the following year’s Indian-inflected Baiyina and 1977’s Joyous Lake, featuring what many believe to be Martino’s best backing group, with Delmar Brown on Fender Rhodes and Kenwood Dennard on drums. He deals with the long road to recovery following his surgery, and how a solid practice regimen, accompanied by the attention of his always-encouraging parents, got him back playing better than ever.

It’s a rich story, making it all the more frustrating that Martino’s presentation of events often feels somewhat cursory. One hesitates to hammer too hard; after all, he’s dealing with events of which his memory may not be crystal-clear (there are patches of the past that he still does not recall; guitarist Dean Brown, at one point, mentions that Martino no longer remembers him). But the lack of detail about the recording of many of his albums and his relationships with his sidemen is a disappointment. Reading Here and Now! made me want to hear Martino’s music again, but it didn’t make me feel like I was hearing it, as some music bios have.

Martino’s book is as much a work of spiritual inspiration as it is one of personal history. The Catholic-raised Martino has always been fascinated by Eastern thought, and the guitarist outlines a belief system rooted in experiencing the moment and in music as a tool for developing “a devotion to life itself: in Coltrane’s words, ‘A Love Supreme!'” It is clear that this philosophy has served Martino well through trying times, though some readers may skim these passages while trying to find the next jazz-related anecdote.

The last third of Martino’s book is mostly given over to the words of others. A lengthy section of testimonials from fellow guitar greats occasionally veers into hagiography, but there are just enough unique anecdotes and memorable quotes to keep the pages turning (I especially liked Mike Stern’s blunt-but-affectionate assessment of Martino as “just a soulful motherfucker”). The book also includes an interview with Martino, filmmaker Ian Knox and neuropsychologist Paul Broks, who collaborated with the guitarist on Martino Unstrung, a documentary about his surgery and recovery. Rounding out the volume is a reprint of a 2004 Guitar Player interview detailing Martino’s system of utilizing augmented chord clusters to create a wholly original guitar sound, an article that guitarists of all skill levels should find amusing and instructive.

Here and Now! is not a perfect chronicle of Pat Martino’s life, but considering the alternative, I’m happy to have it, and him, in the world.

Nabil Ayers didn’t need to write a memoir about what rarely existed between him and his biological father, composer/vibraphonist Roy Ayers, to connect with making … END_OF_DOCUMENT_TOKEN_TO_BE_REPLACED

“I’m sorry, but your friend didn’t make it.” And with that, a small group of friends, loved ones, and co-workers knew the death of William … END_OF_DOCUMENT_TOKEN_TO_BE_REPLACED