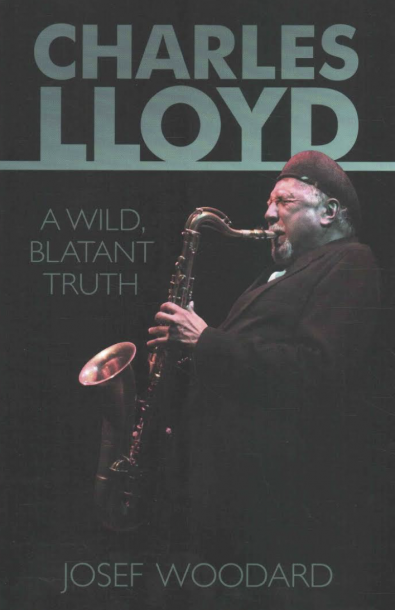 The cover of a Wild, Blatant Truth by Josef Woodward

Josef Woodard’s Charles Lloyd: A Wild, Blatant Truth is an unauthorized biography. But it’s hard to imagine any authorized volume providing richer perspectives on one of jazz’s living visionaries.

A longtime contributor to a broad range of publications (including JazzTimes), Woodard grew up and lives in Santa Barbara, Calif. This brought him into the orbit of tenor saxophonist Lloyd, who settled in the city with his wife and manager, Dorothy Darr, following a self-imposed “hermitage” in the state’s Big Sur wilderness region. The proximity led to a two-decades-and-counting association, Woodard frequently interviewing Lloyd about a life that saw him recede from the heights of commercial success in the late ’60s and then re-emerge during the ’80s as one of the music’s most exploratory elder statesmen.

It’s a fascinating tale, and Woodard tells it in an equally fascinating style. Lloyd is forthright about his checkered early relations with his family, admitting that his mother didn’t want him. Performing publicly from the age of 10, Lloyd’s wandering spirit eventually brought him to Los Angeles, where he hooked up with Eric Dolphy, Ornette Coleman and other notables then in coastal residence. Gigs with Chico Hamilton and Cannonball Adderley led to the formation of a seminal quartet, featuring pianist Keith Jarrett and drummer Jack DeJohnette, that exploded into prominence thanks to Forest Flower, the 1967 release of a performance at the previous year’s Monterey Jazz Festival.

Then, just as he was getting about as famous as jazz musicians ever get, Lloyd walked away. Woodard calls the motivation for Lloyd’s self-imposed exile “a complicated cocktail of rationales and demons that even he can’t exactly articulate,” but one gets the impression that the saxophonist simply was searching for something higher. This quest remains a constant throughout both his life and A Wild, Blatant Truth. Lloyd frequently speaks of music as a “Holy Grail,” a form of “service” one performs. He comments on several occasions that he is merely a vessel from which the music emerges, and twice quotes a comment from the late drummer Billy Higgins about how he no longer played on the physical plane; his music had become purely spiritual.

It was during Lloyd’s Big Sur sojourn that he solidified two key relationships, with the self-realization-focused Vedanta spiritual system, and with Darr, who first saw him perform in Montreal in 1967 and with whom he has forged an unbreakable personal and professional bond. (In addition to managing Lloyd, Darr has helped make documentaries about him, including Arrows Into Infinity, released on DVD by the ECM label last year, and her artwork is showcased on several Lloyd album covers.)

Lloyd speaks with warmth and generosity about a number of collaborators with whom he has worked since his re-emergence. But his deepest approbations are for Higgins, “the nuance master,” to whom Lloyd seems to owe near-ineffable gratitude. He speaks with reverence of the balance of his Vedantic beliefs with Higgins’ Muslim faith, and talks at length about the 2001 recording, just months before the drummer’s death, of their double-disc duet album Which Way Is East.

Some readers may be turned off by the overtly spiritual nature of Lloyd’s commentary; this is a man who has embraced, as the title of his 1979 album puts it, a pathless path, and those with little tolerance for mysticism, sutras and the Rig Veda could find their patience tested. Also, the timespan over which these interviews took place sometimes leads to sameness in Lloyd’s characterization of people and events. Though years may have passed between chats where he described himself as “blessed” or “drunk with the music,” it all comes together in one flow on the page, and creates an occasional sense of not-really-there redundancy.

But to borrow one of Lloyd’s own favorite phrases, Woodard has performed a service here, distilling not just Lloyd’s story but his vision. The feelings one takes from the slightly ironically titled A Wild, Blatant Truth are of peace, persistence and deep regard for the never-ending nature of self-actualization, through music, prayer or simply finding how to be. “I hope,” says Lloyd, “that, in the music, there is this awakening factor that will touch that part in people’s beings that is vibrant with kindredness of that oneness. Because there’s only one life here.”

First published in 1997, now republished with a new introduction, Jackie Kay’s Bessie Smith unrolls less like a formal study of the singer and much … END_OF_DOCUMENT_TOKEN_TO_BE_REPLACED

Like its author, a memoir of John Lurie’s could zig and zag in a dozen directions. There’s the acting career that brought him to the … END_OF_DOCUMENT_TOKEN_TO_BE_REPLACED