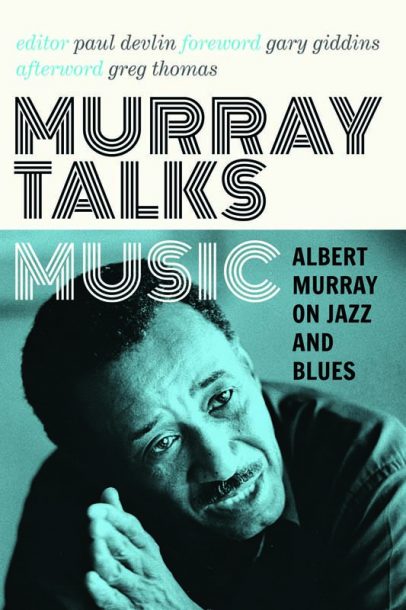 In 2016, encountering Albert Murray (1916-2013) can be a complex experience. Murray’s work as a novelist, essayist and cofounder of Jazz at Lincoln Center espoused a vision of jazz firmly, some would say intractably, fixed in the music’s origins as a dance-oriented derivative of blues. The title of what became arguably Murray’s most famous work, 1976’s Stomping the Blues, is tied to this notion of jazz as a tool for “getting your head straight,” for facing life’s problems with style. It’s a powerful reading, but one with seemingly no room for the genre’s enduring avant-garde.

Murray Talks Music (University of Minnesota Press), a new collection of largely never-before-published interviews and essays, with a foreword by Gary Giddins and an afterword by Greg Thomas, consistently brings these issues to bear without ever entirely resolving them. Throughout these works, spanning 1958 to 2006, Murray’s conception of jazz is clear and concrete. Though he does view jazz as dance-related, he nevertheless believes the music has loftier effects than just the facilitation of leisure. In a 1994 conversation with Wynton Marsalis, he describes playing jazz as “stylizing the raw material of experience, to make it into a form that elevates your conception of life and possibility.” He cites Duke Ellington’s definition of jazz as “Negro American feeling expressed in rhythm and tune,” and links the music’s improvisational emphasis to the need for adaptability in the life of the American slave. But Murray doesn’t trap the music in a folk context. Rather, he draws hard lines between folk, pop and fine art forms, with the work of Ellington, Louis Armstrong and Count Basie solidly in the “fine” column.

To Murray, these three artists represent the pinnacle of jazz expression. Murray calls Basie the greatest example of the “ungaudy” in American music, and in a conversation with scholar Robert G. O’Meally praises Armstrong’s knowledge of “the literature of the trumpet.” Ellington is the focal point of a 1989 radio conversation with Murray, writer Stanley Crouch and historian/saxophonist Loren Schoenberg, in which the men extrapolate at length on the composer’s genius. Murray and Crouch’s simpatico philosophies pit them in an intellectual cutting contest, Murray scoring his richest point when he compares Ellington to Shakespeare: “[H]e could go into the Globe Theatre and provide as much entertainment as the hacks would provide, and at the same time … the finest of fine art.”

Though adamant in his rooting of jazz in the black American experience, Murray is never shy about linking the music to the continuum of world art, literature and thought. He connects jazz to Mark Twain, whose work, like the music, “cuts through the things that divide people”; to T.S. Eliot, whose “Tradition and the Individual Talent” is referenced in a discussion of the jazz artist’s use of the music’s history; and to Ernest Hemingway, called “the ur-father of jazz in prose” in a foreword to William Zinsser’s Mitchell & Ruff: An American Profile in Jazz(1984).

Murray’s notions of jazz’s aesthetic reach are so richly democratic, it’s all the more frustrating to be confronted throughout with evidence of reductive perspectives on that very same music. His comments about Basie and Ellington can at times be overwhelmingly powerful, as if theirs is the only jazz that matters. Murray does discuss Charlie Parker and Thelonious Monk in effusive terms, and the book features a long 1985-86 interview with Dizzy Gillespie. But save for his collaborations with Marsalis, an artist who has also been accused of excessive fealty to the past, one could easily get the impression that Murray regarded post-1950s jazz as simply beneath his notice. This idea is succinctly driven home by Murray’s “Canon of Jazz Arrangements,” a list which, editor Paul Devlin notes, stops at around 1960.

Nevertheless, Murray Talks Music bears indelible witness to the writer’s role in elevating both jazz itself and the scholarship surrounding the music. As one of the man’s most eloquent disciples, Gary Giddins, puts it in his foreword, Murray gave those who thought and wrote seriously about jazz “more than liberation. He provided a sword: the language and aesthetics to cut through the brambled triteness of borrowed prestige and establish a new domain.”

First published in 1997, now republished with a new introduction, Jackie Kay’s Bessie Smith unrolls less like a formal study of the singer and much … END_OF_DOCUMENT_TOKEN_TO_BE_REPLACED

Like its author, a memoir of John Lurie’s could zig and zag in a dozen directions. There’s the acting career that brought him to the … END_OF_DOCUMENT_TOKEN_TO_BE_REPLACED