Skip to content
Become a member and get exclusive access to articles, live sessions and more!
Start Your Free Trial
Home > Reviews > Guitar, Out and About, Will Bernard > Will Bernard: Out and About 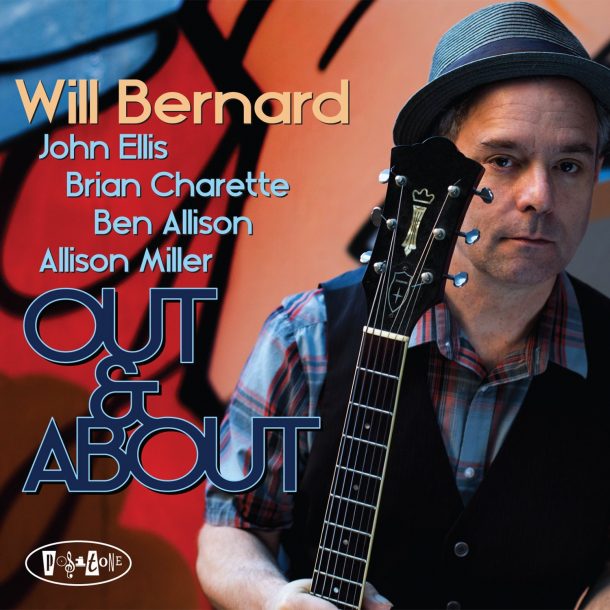 Album by Will Bernard

Out and About is a stylistic hopscotch in which guitarist-composer Will Bernard flexes the talents of his four cohorts, in ensemble interplay ranging from duo to quintet. The record takes its cue from a typically incisive Mark Twain quote: “Broad, wholesome, charitable views of men and things cannot be acquired by vegetating in one little corner of the Earth all one’s lifetime.”

The 11 Bernard originals performed here are all invested with “broad, wholesome, charitable views.” Indeed, it’s about the only thing they have in common. The opener, “Happy Belated,” sports the sort of funky fusion (seasoned with wah-wah effects) typical of previous Bernard outings. But then the guitarist engages in a short-and-sweet duet with bassist Ben Allison, aptly titled “Not Too Fancy.” On “Habenera,” with drummer Allison Miller and organist Brian Charette added to the mix, he tumbles through a lengthy quartet workout full of abrupt shifts in tempo and intensity, at one point recalling Mick Taylor’s buffered solos for the Rolling Stones. “Redwood (business casual)” follows a hard-bop template-a series of fleet, efficient solos-with saxophonist John Ellis filling out the quintet.

Each succeeding tune re-shades the hue, tweaks the attitude, remunerates the instrumentation. Beneath Bernard’s chords and Charette’s drone on “Homeward Bound,” Miller and Allison engage in tension-and-release that is so smooth you barely realize its central role. The amphetamine rush of the staccato vamps and solos from the full quintet on “Full Sweep” is followed by the laconic “Pan Seared,” in which the understated delicacy of the interplay between Bernard, Miller and Allison is bereft of heat. On the title-track finale, Bernard answers Miller’s march time with some Bill Frisell-ian quavering, yet another inventive changeup on a collection that amounts to a declaration of interdependence.

Since February 2022, when Russia invaded its neighbor Ukraine, we’ve received fresh reminders of the horrors and atrocities of war. So it’s timely that the … END_OF_DOCUMENT_TOKEN_TO_BE_REPLACED

From their name to their album title and the dedications of the compositions within, WeFreeStrings takes inspiration from fearless activists. The album’s title track is … END_OF_DOCUMENT_TOKEN_TO_BE_REPLACED

Dreams—some born of illness and isolation, others bound to artistic aspirations and hope for the future—cohere to form a reality for Caili O’Doherty. Leading a … END_OF_DOCUMENT_TOKEN_TO_BE_REPLACED