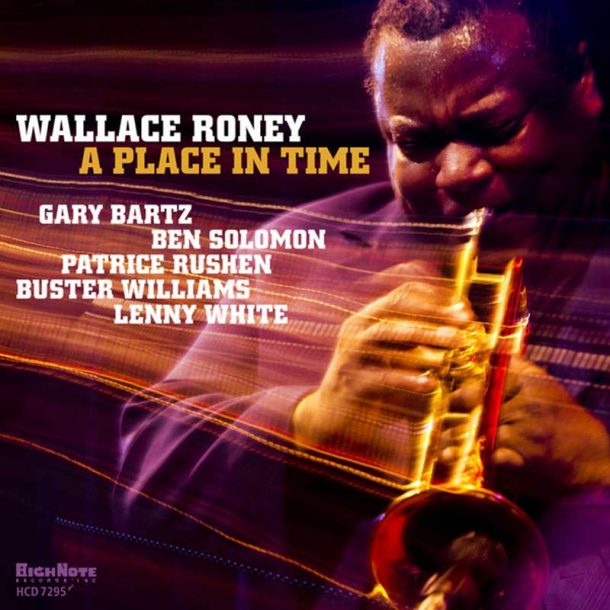 Wallace Roney: "A Place in Time"

Can a band turn an extended break into a musical gain? Apparently so. Trumpeter Wallace Roney’s acoustic quintet with alto saxophonist Gary Bartz, pianist Patrice Rushen, bassist Buster Williams and drummer Lenny White gained kudos for occasional gigs between 1998 and 2001. And then the group’s members went their separate ways, finally reuniting in 2016, with young tenor and soprano saxophonist Ben Solomon joining to make it a sextet. Even better, this time they got into a recording studio. The result, A Place in Time, suggests that the group’s penchant for fruitful compositions, dynamic interplay and bracing solos remains intact.

More than half of the set is devoted to originals, starting with Rushen’s “Around and Through.” That tune’s repeating, tension-and-release theme quickly gives way to a brief Roney solo and a continuation of the head before breaking again for the trumpeter’s high-flying moves, initially backed by just Williams’ steady walking and White’s conversant interjections. That instinctive musical connection is evident, too, on Williams’ aptly named “Air Dancing,” with its rising and falling three-horn harmonies; the playful Roney-Solomon piece “Observance”; Solomon’s sprawling ballad “Ardeche”; and White’s burner “L’s Bop,” first heard 35 years ago on the all-star project The Griffith Park Collection.

The standard “My Ship” gets a relaxed open-air trio treatment, just Roney plus bass and drums, and that grouping also takes on Tony Williams’ haunting, color-shifting “Elegy.” And an unusual pick, Debussy’s “Clair de Lune,” is imbued with something like a music-box feel, Rushen’s flickering piano figures augmented with the leader’s searching muted trumpet lines, Bartz’s shimmering alto and Solomon’s tenor. Here’s hoping it won’t take another 15 years for a sequel.

Recorded in summer 2019 in France, after the release of their album Chapters, Kneebody’s Live at Le Crescent follows 11 albums of jazz/hip-hop/rock frolics sweetened, … END_OF_DOCUMENT_TOKEN_TO_BE_REPLACED

In the early ’70s, Freddie Hubbard was paralleling Miles Davis in going electric and funky. Unlike Miles, though, Hubbard’s recordings were increasingly defined by his … END_OF_DOCUMENT_TOKEN_TO_BE_REPLACED

Milton “Brew” Moore once opined that “Anyone who doesn’t play like Pres is wrong,” but he later realized the limitations of such a position and … END_OF_DOCUMENT_TOKEN_TO_BE_REPLACED

Since February 2022, when Russia invaded its neighbor Ukraine, we’ve received fresh reminders of the horrors and atrocities of war. So it’s timely that the … END_OF_DOCUMENT_TOKEN_TO_BE_REPLACED