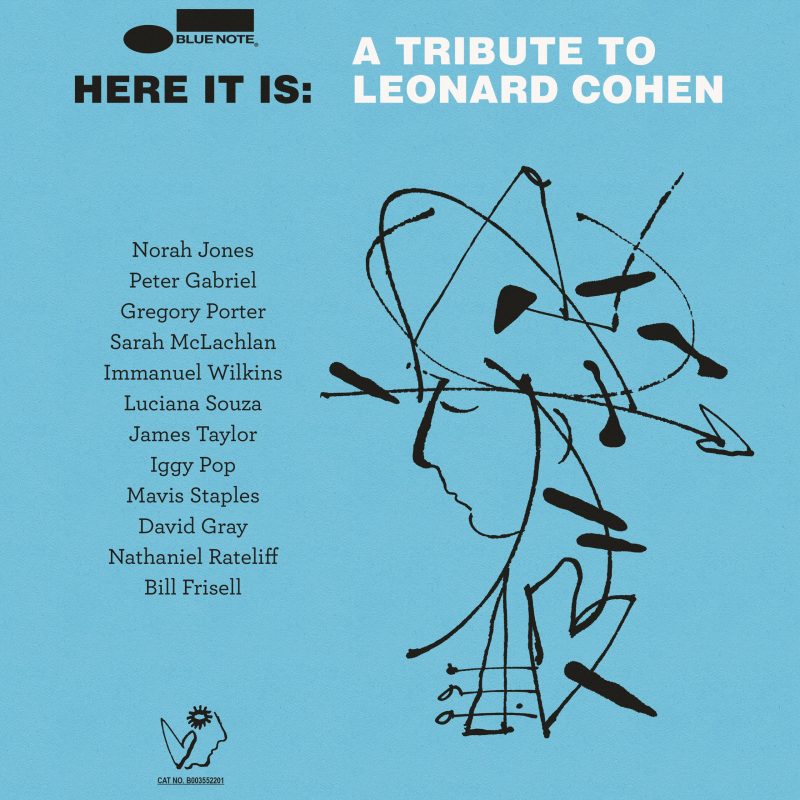 Paying tribute to Leonard Cohen can be a daunting prospect. His vocals, as borderline-atonal and emotionally enervated as they may have sounded, were in fact carefully crafted to reveal the pathos, tragedy, and ironic humor of his lyrics. “You are playing to people who have experienced a catastrophe,” he instructed in his 1979 prose poem “How to Speak Poetry.” “This should make you very quiet. Speak the words, convey the data, step aside.”

The backing musicians—guitarist Bill Frisell, saxophonist Immanuel Wilkins, keyboardist Kevin Hayes, bassist Scott Colley, and drummer Nate Smith among them—for Here It Is, a pop-star-studded Cohen tribute, provide richly textured soundscapes that both enhance the material and give it fresh timbral and emotional flavorings. In fact, Frisell’s showcase, “Bird on a Wire,” and Wilkins’ “Avalanche” give a tantalizing hint of what an all-instrumental Cohen tribute might achieve.

The vocalists are a more mixed bag. Some, such as Nathaniel Rateliff (“Famous Blue Raincoat”), Gregory Porter (“Suzanne”), and Luciana Souza (“Hey, That’s No Way to Say Goodbye”), seem to struggle to summon the blend of artistic focus and psychic surrender necessary to inhabit, rather than proclaim, the emotionally fraught landscapes invoked by Cohen’s lyrics.

Norah Jones’ raspy half-whisper on “Steer Your Way,” on the other hand, approximates Cohen’s own trademark intimations of broken-soul’d grace; James Taylor’s “Coming Back to You” sounds surprisingly unaffected and non-bathetic; and both Peter Gabriel (“Here It Is”) and Iggy Pop (“You Want It Darker”) descend into sepulchral growls worthy of the master himself. Mavis Staples, her voice less supple but no less emotionally riveting than during her prime, throws her entire soul into “If It Be Your Will”: She remains beyond criticism, one of the living lights of our time, and as usual she and her material rise up together to do one another full justice.

In February 2018, Toronto’s Art of Time Ensemble, along with selected vocalists and readers, presented a three-night event fêting Cohen. Songs of Leonard Cohen Live features 13 of the songs performed over the course of those three nights. The music—alternately lush, lilting, and grandiose—is never less than evocative, but in most cases sets different tones from those of Cohen’s own backings, whose sparseness was often the driving force behind their emotional power. The singers, meanwhile, mostly drawn from the Canadian pop scene, were faced with the task of hewing to their musical training and background while doing justice to the bleak apocalypse-of-the-everyday landscape limned in Cohen’s songs.

Sarah Harmer brings pristine perfectionism to “Dance Me to the End of Love” and “Come Healing.” Steven Page modulates between delicacy and neo-operatic grandiosity on “A Singer Must Die.” Sarah Slean’s take on Cohen’s suicidal-ideation anthem “Dress Rehearsal Rag” summons genuine desperation, but the original’s bitterness is absent; her protagonist is self-pitying, not self-lacerating.

On the other hand, Tom Wilson’s guttural moan on “Closing Time” sounds more like late-period Cohen than Cohen himself, although it might have been more effective if he’d made it sound more like a party than a dirge. He also delivers “Who by Fire”—a roll call of the deceased—with a chilling directness accentuated by sparse acoustic guitar accompaniment. Gregory Hoskins and Steven Page’s “Hallelujah” mercifully eschews the bathos that mars too many covers of this Cohen classic; Page wittily portrays the “whipped” would-be Lothario begging for erotic satisfaction in “I’m Your Man.” If, as Cohen sang in “Anthem,” “There is a crack in everything/That’s how the light gets in,” interpreters like Hoskins, Page, and Wilson come closest to acknowledging and celebrating the irony-honed optimism behind that aphorism.

Roy Eldridge’s name on this disc is a bit of a red herring. The trumpeter plays the first two songs, accompanied by the same band … END_OF_DOCUMENT_TOKEN_TO_BE_REPLACED

When campuses went dark at the start of the pandemic, so did the University of the Arts’ Caplan Recital Hall in Philadelphia. But after 18 … END_OF_DOCUMENT_TOKEN_TO_BE_REPLACED

Trevor Dunn is the consummate model of jazz-metal mashups. The prolific bassist and composer has meted out the heaviest of bottom-end riffage as a member … END_OF_DOCUMENT_TOKEN_TO_BE_REPLACED