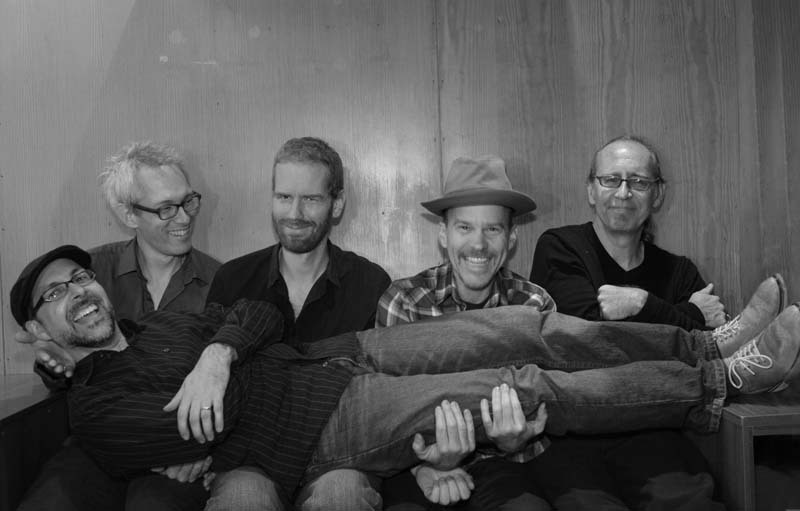 Carrying on: The Claudia Quintet, with John Hollenbeck in repose

The title Super Petite refers to the compositions drummer John Hollenbeck penned for the Claudia Quintet’s eighth album. Bucking the trend toward longer and larger works of music and literature, nearly all of them are timed at six minutes or less. The Quintet’s instrumentation of accordion (Red Wierenga), vibraphone (Matt Moran), clarinet/tenor saxophone (Chris Speed), acoustic bass (Drew Gress) and drums and percussion (Hollenbeck) ensures a sonic experience that borders on the exotic, and the leader’s sundry approach to writing puts all of his colors to good use.

In some of the album’s highlights, Hollenbeck seeks and finds inspiration in the bop era. “Nightbreak” recontextualizes Charlie Parker’s “Famous Alto Break,” a piece of musician folklore in which Bird unleashes an astounding knot of sound during an incomplete take of “A Night in Tunisia.” Hollenbeck slows it to a snail’s pace, rendering its source unrecognizable but creating an almost baroque blend of accordion, vibes and clarinet. “Philly” also draws on a bebop heavyweight, drummer Philly Joe Jones, whose signature lick serves as the foundation for Speed’s angular tenor work.

Despite the source material, Claudia Quintet will never be mistaken for bop torchbearers. Solos often unfold over vamps rather than chord changes, and Hollenbeck repeatedly bends the ear with the nuances of his instrumentation. When Speed and Wierenga play in unison, they can’t help but evoke French cinema. “Rose-Colored Rhythm” incorporates a Senegalese drumbeat, while “Pure Poem” is a technical barrage of ever-changing rhythms that is less than two minutes long. Although Hollenbeck goes for brevity on Super Petite, he uses that limited space to make complete statements.

Since February 2022, when Russia invaded its neighbor Ukraine, we’ve received fresh reminders of the horrors and atrocities of war. So it’s timely that the … END_OF_DOCUMENT_TOKEN_TO_BE_REPLACED

From their name to their album title and the dedications of the compositions within, WeFreeStrings takes inspiration from fearless activists. The album’s title track is … END_OF_DOCUMENT_TOKEN_TO_BE_REPLACED

Dreams—some born of illness and isolation, others bound to artistic aspirations and hope for the future—cohere to form a reality for Caili O’Doherty. Leading a … END_OF_DOCUMENT_TOKEN_TO_BE_REPLACED