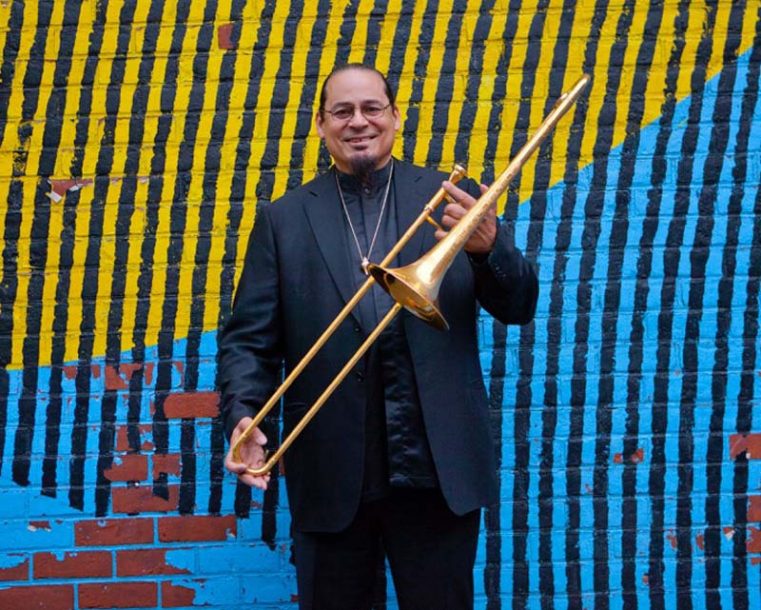 Steve Turre, responsible for some of the most creative and engaging trombone-led jazz sessions of recent vintage, goes for a non-concept concept here, in a manner of speaking. As suggested by the album’s title, for this outing Turre taps a rhythm section of masters: pianist Kenny Barron, bassist Ron Carter and drummer Jimmy Cobb. He’s also joined, on four tracks, by tenor saxophonist Javon Jackson, a fellow alumni of Art Blakey and the Jazz Messengers, and, on the closer, percussionist Cyro Baptista. The latter drives home the bossa rhythms on a new arrangement of “Corcovado,” the sole track here on which Turre plays conch; he effectively applies the still-exotic tones of his “found” instrument to the melody of the Jobim tune, and to an imaginative solo.

Turre, too, uses the occasion to toast other masters, including one of his trombone heroes, the late J.J. Johnson, with an uptempo take on Johnson’s “Coffee Pot,” a showcase for vigorous improvisations by the leader and Jackson. He nods to Wayne Shorter (another Blakey grad) with the hard-bop gem “United,” its singsong melody initially doubled by Barron and Carter. His burnished tone is well displayed via a leisurely stroll through the Monk ballad “Reflections,” during which he uses his Harmon mute to tonally switch things up. And Turre uses his plunger to great, raucous, humorous effect on the chestnut “When Sunny Gets Blue.”

The trombonist also brings along several of his own compositions, starting with the bluesy, gospel-tinged “Taylor Made,” the laidback “Quietude,” featuring Barron’s casually virtuosic solo, and the rootsy “JoCo Blue,” which finds Turre and Jackson dynamically trading fours. Turre uses a cup mute on his bouncy “Mellow D for R.C.,” and his title track thrives on a zigzagging melody and hard-grooving swing. Tasty, and filling.

The title of this album, and the title of its first track, “Jade,” announce a clear shift in focus for vibraphonist Sasha Berliner from her … END_OF_DOCUMENT_TOKEN_TO_BE_REPLACED

Play or Die is a macabre title for this reissue by Tony Williams (1945-1997), the incredible drummer who rose to fame as a teenager with … END_OF_DOCUMENT_TOKEN_TO_BE_REPLACED

Any recording that contains a track titled “Rewind Fee” has a substantial bit of throwback in its spirit, and that’s the case with Spider Season, the … END_OF_DOCUMENT_TOKEN_TO_BE_REPLACED