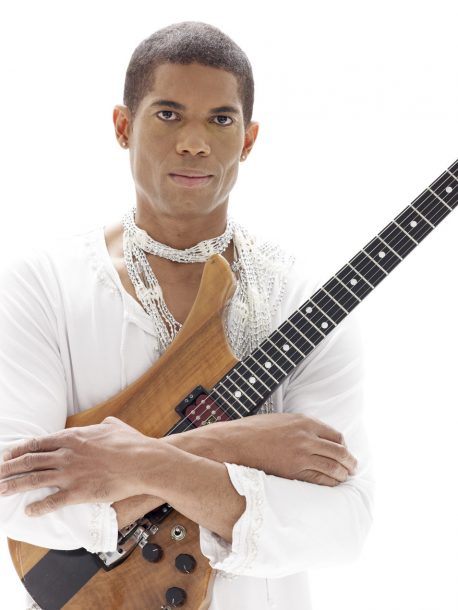 It’s refreshing that, for this album he simply calls Friends, Stanley Jordan didn’t reach out into the worlds of commercial pop and R&B to recruit arena-filling names to assist him, as so many others have done. He stays within the jazz community, signifying that his goal in inviting these nine guests was to make a more artistically satisfying record, not a higher-profile one. It was a smart choice: nearly three decades after his tapping technique to guitar-playing made him a star-and three years after returning from a decade-long layoff-Jordan has come up with one of his most impressive and diverse efforts.

Several of the album’s highlights occur when Jordan pairs with another guitarist. On the Neal Hefti-penned “Li’l Darlin'” Jordan and Bucky Pizzarelli maintain the languid tempo of the familiar Count Basie arrangement, trading strums and tastefully picked solos while extricating the melody from its traditional blues/big-band setting. “One for Milton,” written and performed by Jordan, guitarist Russell Malone and drummer Kenwood Dennard, is for the late composer Milton Babbitt; its free-for-all improvisation reflects the composer’s adventurism and mathematical approach.

“Bathed in Light” puts Jordan in the company of trumpeter Nicholas Payton, soprano saxophonist Kenny Garrett, Christian McBride on bass and Dennard. A surprisingly conventional midtempo ballad, it flirts with smooth-jazz textures while allowing for solid soloing from all. Its easy pace comes as a surprise mostly because the identical crew had already opened the recording with the seriously burning “Capital J.”

Soprano saxophonist Ronnie Laws, violinist Regina Carter and guitarists Mike Stern and Charlie Hunter are the other friends on Friends. Each brings another color to an album that succeeds in re-establishing Jordan as an innovator as well as reminding us that there’s more to him than bewildering technique.

In the early ’70s, Freddie Hubbard was paralleling Miles Davis in going electric and funky. Unlike Miles, though, Hubbard’s recordings were increasingly defined by his … END_OF_DOCUMENT_TOKEN_TO_BE_REPLACED

Milton “Brew” Moore once opined that “Anyone who doesn’t play like Pres is wrong,” but he later realized the limitations of such a position and … END_OF_DOCUMENT_TOKEN_TO_BE_REPLACED

Since February 2022, when Russia invaded its neighbor Ukraine, we’ve received fresh reminders of the horrors and atrocities of war. So it’s timely that the … END_OF_DOCUMENT_TOKEN_TO_BE_REPLACED

From their name to their album title and the dedications of the compositions within, WeFreeStrings takes inspiration from fearless activists. The album’s title track is … END_OF_DOCUMENT_TOKEN_TO_BE_REPLACED