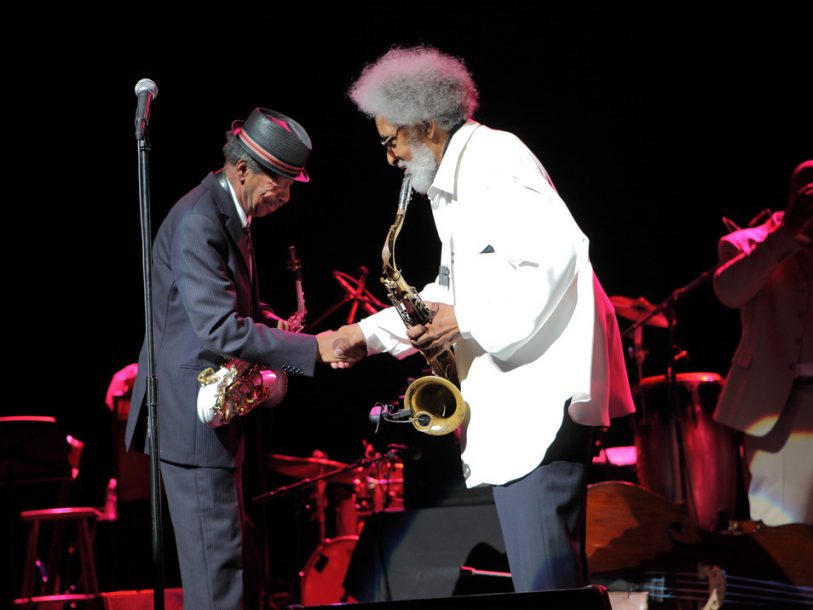 Sonny Rollins’ Road Shows, Vol. 1 was the most important jazz album of 2008, but it had its quirks. Its seven tracks spanned 27 years and six different ensembles. Three of the tracks had been recorded on cassette from radio or television broadcasts, and four came from soundboard tapes. The sonic quality was bad to mediocre. But for the first time on record, Vol. 1 documented what Rollins fans had been telling us for years: that on his good nights, the saxophonist’s concerts were metaphysical experiences.

The eagerly anticipated Vol. 2 is now here. The music, all new, comes exclusively from soundboard tapes, so the sound is hard, bright, dry and flat. The audience could be in the next county, but the clarity and balance is distinctly superior to Vol. 1. And on every track, just when you think Rollins has arrived at his final crescendo, he kicks it up a level and keeps wailing. If there are degrees of metaphysical experience, Vol. 2 is more so.

It comes from a single event that has already passed into legend, Rollins’ sold-out 80th birthday concert at the Beacon Theatre in New York on Sept. 10, 2010. But appended to the four New York tracks, one at the beginning and one at the end, are two tunes recorded less than a month later in Japan. It is all blended, with overlapping applause, to sound like one concert. The party begins (technically in Sapporo) with a monstrous 15-minute celebration/annihilation of “They Say It’s Wonderful.” Rollins’ opening blasts could knock you down. His first theme statement is cursory, a quick reference in an emerging towering form. His gigantic digressions eventually slow and veer into time. He discovers the theme again, then stops and defers to his guitarist, Russell Malone, for an interlude of relative calm. When Rollins returns the energy spikes; the catharsis, the exhilaration, comes from hearing the song wrung dry.

Then, in New York, the birthday guests start to arrive. Jim Hall, alone with Rollins’ regular rhythm section of drummer Kobie Watkins, electric bassist Bob Cranshaw and percussionist Sammy Figueroa, traces “In a Sentimental Mood.” It is an arc of warm light, a rapt guitar meditation different from everything around it.

Rollins comes back and introduces bassist Christian McBride and drummer Roy Haynes and they play the blues. “Sonnymoon for Two” recalls epic trio albums like Way Out West and A Night at the Village Vanguard. All Rollins has ever needed is a great bassist and drummer and wide open spaces. After his first solo (bolder and freer than the one he took on the same tune at the Village Vanguard 53 years prior), he announces that there is a guest waiting in the wings. The guest does not appear. Rollins takes a second solo, stalling for time. When Ornette Coleman finally walks onstage the audience erupts. Coleman dives into “Sonnymoon for Two” with unmistakable screeches and squawks, and the moment is electric. It is the first meeting on record between the two greatest living saxophonists in jazz.

With one zigzagging phrase, Coleman introduces into the evening a new timbre, a new confrontational musical logic. When Rollins reenters, there is a sudden revelatory disconnect between Coleman’s chirps and scrapings and Rollins’ pristine clarion calls. Coleman is the id, pure impulse; Rollins is the superego, the voice of reason. Twenty-two minutes in, they holler the theme together in a wild, loose final unison and the Beacon Theatre goes crazy.

“I Can’t Get Started,” a fervent ballad with Roy Hargrove, follows “Sonnymoon” on the disc and offers rest. (It was, however, played earlier in the actual concert program.) Hargrove’s first solo lays his vulnerable human trumpet sound close to the melody, and his second solo reconfigures it. With Billy Strayhorn’s “Raincheck,” Hargrove offers 13 minutes of sustained creativity at a medium burn.

Even in all this illustrious company, some of it 40 years younger, the player here with the most ideas, the most muscle, the most stamina, the most juice, is Sonny Rollins. In a perfect world, McBride and Haynes would be in his working band and he would put out a real live recording rather than a soundboard tape. But in this world we have Road Shows, Vol. 2, and what real jazz fan would not want to own it?

If you’re old enough to remember the 1986 release of Argentine bandoneonist/composer Astor Piazzolla’s noirish Tango: Zero Hour, you’ll recall that its entry onto the world … END_OF_DOCUMENT_TOKEN_TO_BE_REPLACED

Many things have changed since Kind Folk formed in 2014 and launched on record with 2018’s Why Not, but the collective resolve of this quartet’s … END_OF_DOCUMENT_TOKEN_TO_BE_REPLACED

Call it the feelgood jazz-ish release of the year. Lifted, the first album from New Orleans horn man and singer Trombone Shorty in half a … END_OF_DOCUMENT_TOKEN_TO_BE_REPLACED

Although avant-garde jazz titans Chad Fowler and Matthew Shipp come from different generations, they share a common bond: the superhuman ability to speak the language … END_OF_DOCUMENT_TOKEN_TO_BE_REPLACED