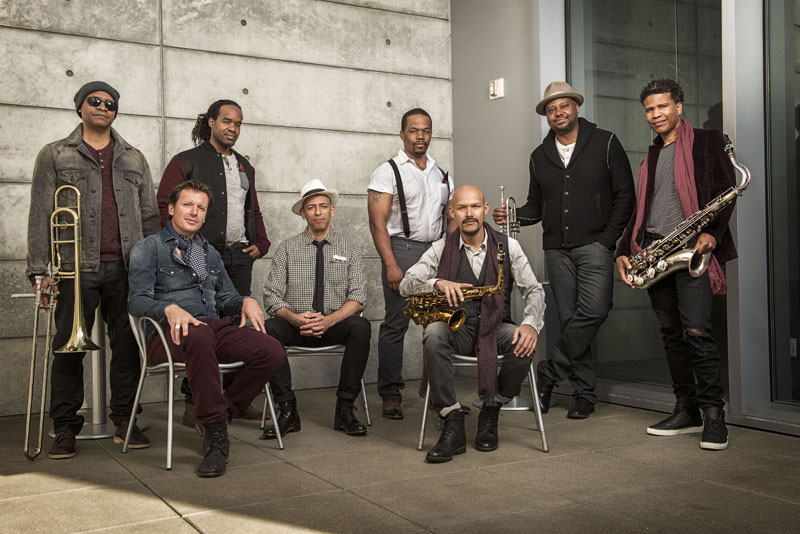 SFJAZZ is a powerful cultural institution based in San Francisco. It even has its own 700-seat venue, the SFJAZZ Center, where it presents more than 300 performances a year. Since 2004 the organization has also sponsored the SFJAZZ Collective, an all-star octet.

Over the years, many major figures—interestingly, almost all based on the East Coast—have played in the Collective, including Joe Lovano, Joshua Redman, Dave Douglas, Bobby Hutcherson and Stefon Harris. The current edition has some headliner names (alto saxophonist Miguel Zenón, tenor saxophonist David Sánchez, vibraphonist Warren Wolf) and some who are less well known but who are still on the jazz A-list (bassist Matt Penman, drummer Obed Calvaire).

Annually, SFJAZZ commissions from each band member an original composition and a new arrangement of a work by that year’s chosen composer, and releases a limited-edition recording. In 2016 the composer was Miles Davis. This latest two-CD set, recorded live at the Center, opens with “So What,” arranged by trumpeter Sean Jones. The immortal, suspenseful piano/bass lead-in is transcribed from Kind of Blue, but everything else is new, including the double-time orchestration of the head and the ferocious solos by trombonist Robin Eubanks and pianist Edward Simon, both of which contain fragments of Miles’ original solo, flying by. It is “So What” magnified and refracted through a new prism, revealing fresh colors. Zenón’s arrangement more drastically modifies “Nardis” by incorporating Eastern European folkloric elements. “Nardis” explodes with exotic energy and becomes a frenzied dance around a Gypsy campfire. “Milestones” may be the most thoroughly reimagined piece. Penman keeps Miles’ harmony and horn voicings but creates a new groove, and moves the melody into the background, as a softly provocative context for soloists.

Today, engagements with great historic repertoire are less common in jazz than in classical music. Current jazz musicians prefer to play their own stuff. But Miles’ masterworks, like Beethoven’s, have yet to be exhausted. The arrangers here must call upon new resources within their own creativity. They must fully understand something beautiful that is not theirs, in order to discover themselves in it.

With supergroups, serious solo firepower is assumed. Jones is wildly inspired and Calvaire is lethal on “Bitches Brew,” and Penman adds new degrees of wickedness to a famously wicked song. Zenón, a lights-out soloist, often threatens to blow the roof off the SFJAZZ Center. But the Collective possesses qualities that most all-star bands lack, like continuity, discipline and focus. On the second CD, with the eight originals, individual moments, however vivid, always serve larger ensemble purposes. “Tribe” is a drum dissertation for Calvaire but opens a space for torrential outpourings from Zenón, who wrote it. “Canto” is a chant with long calls and incantations from its composer, Sánchez. On his own “In the Heat of the Night” and on Jones’ “Hutcherson Hug,” Wolf’s solos are journeys over innermost memories, the sudden runs reaching peaks of joy and then falling off into valleys of sadness, with lingering vibratos. Twenty-seventeen will not offer many jazz albums so well thought out, so emotionally authentic and so completely realized.

The title of this album, and the title of its first track, “Jade,” announce a clear shift in focus for vibraphonist Sasha Berliner from her … END_OF_DOCUMENT_TOKEN_TO_BE_REPLACED

Play or Die is a macabre title for this reissue by Tony Williams (1945-1997), the incredible drummer who rose to fame as a teenager with … END_OF_DOCUMENT_TOKEN_TO_BE_REPLACED

Any recording that contains a track titled “Rewind Fee” has a substantial bit of throwback in its spirit, and that’s the case with Spider Season, the … END_OF_DOCUMENT_TOKEN_TO_BE_REPLACED