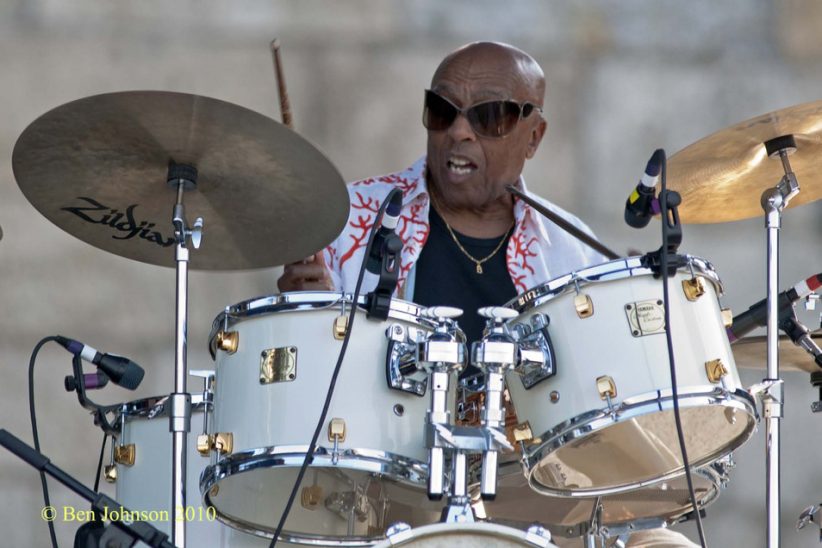 You could spend the rest of your days trying to come up with superlatives to describe 86-year-old Roy Haynes, whose résumé virtually doubles as a potted guide to post-war jazz. But while you’d be looking back at all he’s done, Haynes is still firmly planted in the present, a point brought home by the fact that he calls his group the Fountain of Youth Band.

That’s not to imply that the cleverly titled ROY-alty (did it really take this long for him to use that one?) is some kind of hip-hop/jazz hybrid bursting with electronics or any other deliberate attempt to be über-contempo. Haynes doesn’t need that. Instead, the album falls squarely into a well-defined postbop box, and therein Haynes is sharp enough to allow his much younger crew-bassist David Wong, alto saxophonist Jaleel Shaw and pianist Martin Bejerano-to direct the proceedings as often as he calls the shots himself. ROY-alty isn’t so much a showcase for the drummer as the new recording by an exceptional band that just happens to have one of the all-time sticksmen keeping time.

On two tracks, the ballad “Pinky” and an uptempo take on the folk standard “They Call the Wind Mariah” that disguises the main theme convincingly, it’s just that basic quartet at work, and they’re an imposing bunch. But ROY-alty packs added star power in the form of Chick Corea and trumpeter Roy Hargrove, the latter on six of the album’s 10 tracks, the former on two. One of the Corea tracks, Monk’s “Off Minor,” gives Haynes a time-shifting workout, but he’s just as striking on more conventionally swinging numbers that pair the band with Hargrove, from the opening Sonny Rollins number “Grand Street” through the McCoy Tyner-penned closer, “Passion Dance,” which adds saxophonist Marcus Strickland, pianist Robert Rodriguez and Haynes’ son Craig on congas.

If you’re old enough to remember the 1986 release of Argentine bandoneonist/composer Astor Piazzolla’s noirish Tango: Zero Hour, you’ll recall that its entry onto the world … END_OF_DOCUMENT_TOKEN_TO_BE_REPLACED

Many things have changed since Kind Folk formed in 2014 and launched on record with 2018’s Why Not, but the collective resolve of this quartet’s … END_OF_DOCUMENT_TOKEN_TO_BE_REPLACED

Call it the feelgood jazz-ish release of the year. Lifted, the first album from New Orleans horn man and singer Trombone Shorty in half a … END_OF_DOCUMENT_TOKEN_TO_BE_REPLACED

Although avant-garde jazz titans Chad Fowler and Matthew Shipp come from different generations, they share a common bond: the superhuman ability to speak the language … END_OF_DOCUMENT_TOKEN_TO_BE_REPLACED