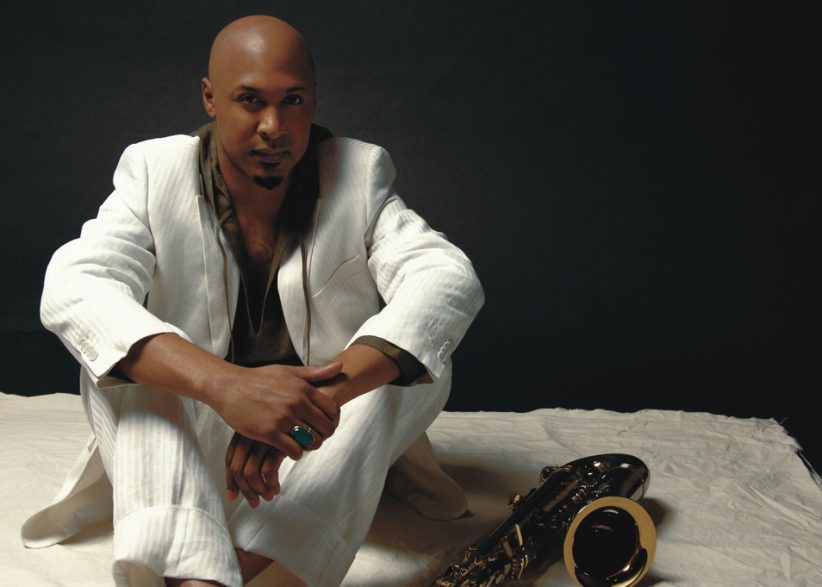 The title of Roy Hargrove’s 1993 album, Of Kindred Souls, was taken from a composition by the trumpeter’s then-regular saxophonist, Ron Blake. The intriguing, hymnlike melody was first enunciated, naturally, by Hargrove, but Blake took the first solo, a solo that displayed his muscular tenor attack but which also too readily revealed his Coltrane influence. Both the writing and the playing hinted at great but not quite fulfilled potential.

Blake revisits “Of Kindred Souls” on his new album as a leader, Shayari (pronounced SHY-ree, an Urdu word for a stylized form of verse). This time the arrangement isn’t as dense and pushy as before, as if the composer needn’t rely on sheer muscle anymore. After the restrained opening by producer/pianist Michael Cain and guest violinist Regina Carter, Blake’s solo reconfigures the theme, relying on the tension between the old melody and the new to command attention as he once relied on lung power. The increased space and lyricism in the new arrangement sharpen the meditative qualities of the piece; thus Blake extends the legacy of Coltrane’s later spiritual compositions without sounding like Trane.

Every major jazz artist has that album on which he or she first puts all the pieces together and assumes a distinctive voice, and Shayari is Blake’s. That voice seems filled with yearning-whether that yearning is for the spiritual answers implied by “Atonement,” for the homeland implied by “The Island” or the woman implied by “Waltz for Gwen.” That sense of seeking comes from a warm, breathy tone that seems to be mulling over each thought before expressing it and then mulling over the next one even as the first fades away. And it comes from an emphasis on melody in which the notes seem to be leading onward toward a resolution that’s always just out of reach.

You can hear that in the repeating, prodding piano figure that opens “Atonement.” Eighty seconds into the number, Blake introduces a second, more patient melody, seemingly the humbling act of contrition implied by the title. But Jack DeJohnette’s never-play-the-same-way-twice drumming pushes the tenor sax into a solo as agitated as Cain’s keyboard ostinato.

As these three musicians try to fit their very different approaches into the same tune, they create the impression of a desperate frenzy, even though they’re not playing very many notes nor very fast. They take care to articulate each bar, and out of that precision comes the tension between parts that lends the feeling of urgency. A similar give-and-take can be heard on “Abhaari” and “Hanuman,” which the three men co-composed.

Though he’s now based in New York, Blake was born and raised in the Virgin Islands, where he met his future mentors Gary Bartz and Bobby Hutcherson at a jazz festival. He includes a jaunty version of Hutcherson’s “Teddy” on Shayari and employs percussionist Gilmar Gomes to reinforce the Caribbean flavor of the session. Another Brazilian, Ivan Lins, wrote “The Island,” and Blake’s ballad arrangement suggests a wistful longing for something left behind.

Blake originally recorded “Waltz for Gwen” on his 2000 debut as a leader, Up Front and Personal, but this time he plays distilled phrases on tenor rather than florid phrases on the soprano, as if he were approaching the woman with deep-throated confidence now instead of giddy excitement. Gomes’ shakers and Cain’s block chords combine with Blake’s chantlike phrases to suggest the temple-ritual quality of Pharoah Sanders’ Impulse! albums, as if wooing a woman were little different than worshipping a deity.

Perhaps it’s not, for “What Is Your Prayer For” suggests a very earthbound romanticism despite its title. Blake holds out key notes of his ballad as if they were long sighs of desire, while Cain’s glass-tinkling piano and guest Christian McBride’s dark, rumbling bass intimate a nighttime setting. Not many notes are played, but the counterpoint between Blake’s leading voice and his bandmates’ comments creates a whole scenario of yearning. There aren’t many who can do that, but Ron Blake has finally emerged as one who can.

As much as Shayari is a triumph for Blake, it’s also one for Cain. He not only co-wrote two numbers but also wrote two more on his own, played piano throughout and produced the whole session. As a producer, he enforced the clutter-free clarity that makes the record so distinctive. And when he engages Blake in two unaccompanied sax/piano ballads-Sammy Cahn’s “Please Be Kind” and Blake’s “Remember the Rain”-Cain’s devotion to sparking drama from two precisely stated but strategically diverging melody lines proves no less than Blake’s.

With Hart, Formanek, and Sanchez representing three generations of avant-garde playing, I’m tempted to call this date historical—especially since it got cut at the Van … END_OF_DOCUMENT_TOKEN_TO_BE_REPLACED

There is a certain elusiveness and beauty in guitarist Julian Lage’s playing that’s reminiscent of his influences Charlie Christian and Jimmy Bryant. As he describes … END_OF_DOCUMENT_TOKEN_TO_BE_REPLACED

Every notable jazz reissue has an intriguing backstory, right? Live at Parnell’s, documenting a week of bruising performances by late B-3 organ master Brother Jack … END_OF_DOCUMENT_TOKEN_TO_BE_REPLACED