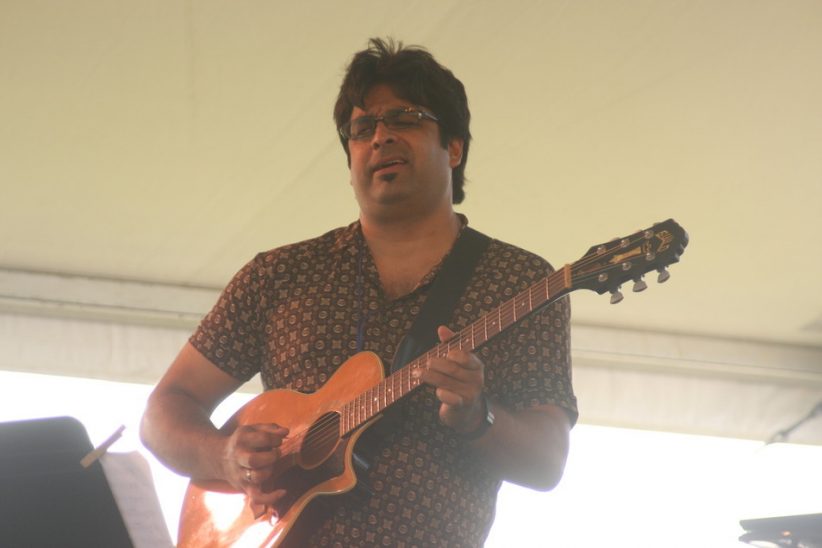 Best known for his probing electric guitar work in various fusion and postbop settings, in addition to occasional forays into South Asian styles, Rez Abbasi switches to acoustic guitar for his debut recording with a quartet first heard at the 2010 Winter Jazzfest in New York. The group’s sound, a distinctive mix of Abbasi’s acoustic six-string, Bill Ware’s vibraphone, Stephan Crump’s double bass and Eric McPherson’s drums, is appealing from the get-go. And Abbasi makes inventive use of the unusual, inviting textures, on a 10-song set with six of his tunes plus four artfully arranged pieces by name composers.

The aptly titled Natural Selection opens with a funk-injected arrangement of a piece familiar to world-music fans, Nusrat Fateh Ali Khan’s haunting “Lament,” and closes with the Pakistani-born Abbasi dueting with himself on a mellow, harmonics-edged version of Bill Withers’ “Ain’t No Sunshine.” Abbasi also turns in creative versions of Keith Jarrett’s hopscotching “Personal Mountains,” built on a tricky 17-bar chord progression, and Joe Henderson’s quick-shifting “Punjab,” the latter a showcase for heady improvisations by the guitarist and vibraphonist Ware.

Abbasi’s own compositions, though, are the standouts here: the rambling “Pakistani Minor” is built on a set of pitches derived from the music of Abbasi’s homeland; the pensive “Up on the Hill” was inspired by pianist Andrew Hill; “Blu Vindaloo” benefits from a deep groove driven by Crump and McPherson; and “New Aesthetic” surges and falls in a manner that is full of surprises. Call it deeply engaging, free-minded chamber-jazz.

Vocalist Naima Shamborguer has been an illuminating presence on Detroit’s jazz scene for decades, elevating standards with her richly textured voice and classically trained ear. … END_OF_DOCUMENT_TOKEN_TO_BE_REPLACED

Aaron Seeber’s cymbals don’t mix—at least not in this mix. As presented in audio by the drummer himself and co-producer Kevin Sun, the ride and … END_OF_DOCUMENT_TOKEN_TO_BE_REPLACED

With the exception of certain legends like J.J., Kai, and Big T, trombonists tend to be the consummate outsiders of jazz; they know the rules … END_OF_DOCUMENT_TOKEN_TO_BE_REPLACED