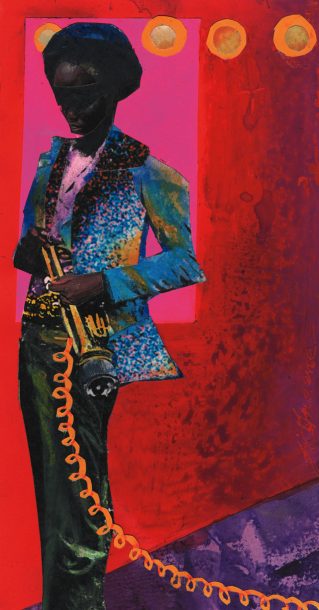 What would jazz history be without its controversies? Real short, for starters, and far less reflective of American social history. At their best, jazz’s controversies reach far beyond the parochial concerns and the vested interests of the principals, and create a potent metaphor for America’s eternal struggle with change. Change draws the battlelines in jazz controversies, its frequently unlikely champions on one side, and its often unwitting foes on the other. For years at a time, jazz’s controversies can play out like trench warfare, with victory and defeat meted out in column inches. Yet, there are the rare incandescent moments when a single artist outflanks not just one side, but both, and creates a truly new paradigm for the art. There is no better example of this than Miles Davis and Bitches Brew, the 1970 double LP that is now the core of the four-CD collection, The Complete Bitches Brew Sessions (August 1969- February 1970).

In hindsight, Miles Davis circa 1969 was primed to spark a revolution in jazz by virtue of his sagging stock throughout the ’60s. Davis spent most of the first half of the decade drifting artistically, and in danger of being permanently eclipsed by former sideman like Cannonball Adderley, John Coltrane, and Bill Evans. Even the formation of the great quintet documented on two essential Columbia/Legacy box sets—The Complete Live at the Plugged Nickel 1965 and The Complete Columbia Studio Recordings of the Miles Davis Quintet—was not a strategic quick fix. By the time the quintet’s stellar second album, Miles Smiles, hit the streets in ’67, he was still outflanked by Cannonball, Joe Zawinul, and “Mercy, Mercy, Mercy” on the jazz-funk front, the outbound route was clogged with Coltrane’s acolytes, and the pianist everybody dug sealed off the rear. Despite its glorious synergy, the quintet did not shape the market as Davis did with Walkin’, Kind of Blue, and Sketches of Spain. It was a crowded field; Miles needed more space between him and the rest.

The confluence of social, musical, and personal forces described by Davis autobiography co-author Quincy Troupe in the current set’s documentation provides a strong, partisan assessment of how Davis got to Bitches Brew. There is a more Machiavellian rationale for Davis’ move that fits the Prince of Darkness like one of his tailored suits. Miles was over 40, confronting a youth culture in which no one over 30 was to be trusted; sure, he had Betty Mabry by his side in the Yellow Ferrari, and he was riding the wave created by Woodstock, Carlos Santana (who contributed a fascinating memoir to the set), and Bill Graham. But, nobody knew if or when the gold rush fever of the music industry would burn itself out; Miles needed a stone cold hit if he was to maintain, let alone improve, his position in a radically changing market. Certainly, to get the job done, the art had to be front and center, compelling, without a whiff of jive compromise. That’s where Miles’ connoisseurship and pragmatism kicked in, and their joined forces are all over Bitches Brew: the jarring, yet alluring mix of electric, acoustic, and indigenous instruments; the cross fades between groove and rubato; the precise placement of condensed compositional materials in expanses of semi-defined space; that the list goes on and on is a testament to Miles’ perspicuity.

In the time it took Gettysburg to become an indelible part of the American psyche, Davis laid down the tracks in August 1969 that would change jazz history forever. However, as detailed in producer Bob Belden’s thorough session annotations, extensive editing employing reverb chambers, echo effects, and tape loops, ensued; the sublimely fluid “Pharoah’s Dance,” clocking in at slightly over 20 minutes, has 19 edits. Concurrent with the state-of-the-art post-production, Davis recorded an additional 2 1/2 CDs of material that altered the jazz-rock-funk nexus of Bitches Brew, brought Brazilian and Indian flavors into the mix, and made current rock tunes fair game (establishing a straight line connecting “Guinnevere,” which remained unreleased until ’79’s Circle in the Round, to the post-retirement “Time After Time”). So, by the time Bitches Brew was issued in April 1970—roughly the span between D-Day and the crossing of the Rhine—Davis was already mapping the campaigns of his remaining years. Producer Michael Cuscuna has it right in his introduction: “Miles was moving so fast that Bitches Brew was simultaneously a crowning achievement and a footnote in his career.”

Revisiting this monumental album ignites the passions that surrounded it upon its release. There is so much to react to on these tracks: the percolating rhythms of drummers Jack DeJohnette and Lenny White, embellished by the percussion of Don Alias and Jumma Santos; the squalls and gurgles of electric pianists Zawinul, Chick Corea, and Larry Young; the electric-acoustic contrasts of bassists Harvey Brooks and Dave Holland; the slashing lines of guitarist John McLaughlin and the otherworldly moans of bass clarinetist Benny Maupin; the phoenix-like soar of soprano saxophonist Wayne Shorter; and the dance-like-a-butterfly-sting-like-a-bee trumpet of Davis. The music continually morphs, an amalgam of jazz, psychedelic rock, and funk, with elements coalescing in the foreground one moment, only to melt away the next. There is an elaborate, exhilarating tension between elemental riffs and exotic texture, luminous melody and roiling polyrhythms, and deep groove and diffuse flow, that still pricks at the ears, and generally gets in your face. Almost thirty years after its initial release, Bitches Brew is still a trip.

However, much of the other material included in the set isn’t. These performances are not filler, per se; a few of the nine previously unreleased tracks, like Shorter’s brooding, riff-prodded “Feio” and Zawinul’s floating, modal “Reflections,” are important additions to the official record. Yet, the non-Bitches Brew tracks mainly document Davis reacting to a fast-moving scene, increasingly favoring a funk-based populism by employing a heavier beat and more effects-laden ensembles. Even before Bitches Brew was released, Miles was already eyeing the next prize.

Prolific bass player Billy Mohler enjoys the best of two disparate worlds. In one, the L.A.-based multi-instrumentalist is a Grammy-nominated sessioneer who’s played with Lady … END_OF_DOCUMENT_TOKEN_TO_BE_REPLACED

Would it be overpraising Tom Harrell to describe his long recording career as practically peerless? Album after album, sometimes year after year, the Midwest-bred trumpet … END_OF_DOCUMENT_TOKEN_TO_BE_REPLACED

Compared to the other outré jazz elders on Adrian Younge and Ali Shaheed Muhammad’s Jazz Is Dead label, Katalyst is a still a relatively fresh … END_OF_DOCUMENT_TOKEN_TO_BE_REPLACED

The Carla Bley many of us think of first is the provocateur, the straw-haired iconoclast behind the sprawling avant-garde opera Escalator Over the Hill and … END_OF_DOCUMENT_TOKEN_TO_BE_REPLACED