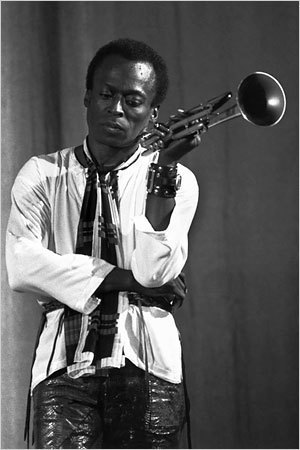 Between the studio sessions that produced In a Silent Way in February 1969 and Bitches Brew that August, Davis started using the core-Chick Corea, Dave Holland and Jack DeJohnette, with Shorter remaining-as his new working band. ORTF (French public radio/TV) was there to record two consecutive performances at the Antibes Jazz Festival on July 25 and 26; these comprise the first two audio discs here. Since Sony Japan released the first date as 1969 Miles: Festiva de Juan Pins in 1993, it will be the most familiar piece of this box set to dedicated fans.

These first two CDs and the DVD all open with Joe Zawinul’s “Directions” and close with Miles’ “The Theme,” which is appended onto Shorter’s “Sanctuary” from Bitches Brew as a sort of arch showbiz in-joke. “Miles Runs the Voodoo Down” and the title track from Bitches Brew are each heard twice across the package, as are “Nefertiti,” Sorcerer‘s “Masqualero,” In a Silent Way‘s “It’s About That Time” and the much earlier “I Fall in Love Too Easily.” But they are heard anew each time, due to the band’s consistently fresh re-imaginings. Adjectives such as synergistic, empathetic or telepathic don’t suffice to describe the uncanny ESP of this unit. If jazz is the “sound of surprise,” this group took that idea further than anyone before or since, fearless of bar lines or other natural boundaries for less adventurous musicians, seldom hitting the “one” even after already-extended phrases. But Miles is definitely driving this spaceship. Those who have pigeonholed Davis for his vulnerably warm mid-register playing will be shocked at his percussive-aggressive muscularity on these sets.

With the ultra-flexible rhythm section’s radar on high, reacting in the moment to Miles’ shifting time feels, pulses, key modulations and tune choices, Davis spontaneously arranges continuous hour long suites of contrasting textural dynamics. By this point, Miles’ minimalism reduced even well-known compositions to little more than melodic hooks-just enough to maintain the integral structure of the form. This strategy provides maximum improvisational space over modes (or, more dramatically, varied musical moods) at his discretion. An intro to “‘Round Midnight” serves as the “ballad” on the first disc, for example, following a hyper-charged “Footprints” morphing out of a nod to more recognizable territory, a version of “Milestones” that alone encapsulates every quality mentioned above. “No Blues,” on the second disc, fulfills a similar bridging function compensating for Corea and Holland’s avant-garde (but never really “free”) tendencies. And where else will you hear Chick Corea quoting Red Garland, or Wayne Shorter superimposing his “Super Nova” theme over “Spanish Key”?

The third CD (Stockholm, Nov. 5, 1969) is the real rarity, since an acoustic piano replaces Corea’s malfunctioning electric by Miles’ second solo in the first cut, “Bitches Brew.” “Paraphernalia,” from Miles in the Sky, is performed, and given DeJohnette’s ferociously fiery, disciplined-chaos maelstroms-much of what he plays during ensemble passages and behind soloing mates would be considered drum features inmost contexts-a version of “Nefertiti” defies all expectations, as does the aforementioned “Milestones.” Another version of “Masqualero” unfortunately fades out during the piano solo, but the disc is completed by a full quintet version of Corea’s “This” from the second show in Stockholm that night.

The DVD is somewhat disappointing, as it has been available for some time as The 1969 Berlin Concert, a Spanish product. Hardly a “lost band,” there are other concerts with accompanying film available (Rome, Paris, Copenhagen). And it’s interesting that only the European media thought these documents of stunning American music were important enough to broadcast and archive.

You know that feeling when you’re leaning way back in a chair, but catch yourself right before you fall over? This quintet lived there, and it evokes nostalgia for a future that could have been. Call it anything, but listen to this.

From their name to their album title and the dedications of the compositions within, WeFreeStrings takes inspiration from fearless activists. The album’s title track is … END_OF_DOCUMENT_TOKEN_TO_BE_REPLACED

Dreams—some born of illness and isolation, others bound to artistic aspirations and hope for the future—cohere to form a reality for Caili O’Doherty. Leading a … END_OF_DOCUMENT_TOKEN_TO_BE_REPLACED